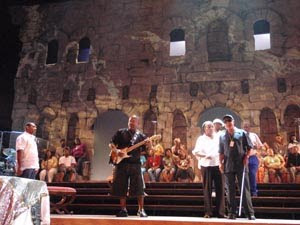 Can you guess what all these names have in common? They've all, at one time and place or another, worked with my 'Gospel Family' - the actors, actresses, singers, and crew in my Gospel at Colonus show. And that's just to toss a few fancy names out there. (Oh - wait - the Soul Stirrers and the Blind Boys of Alabama and the Steeles are in my show!)

Just goes to show the astonishing, awe-inspiring talent of the incredible performers I get to work with as sound engineer. The Steeles have sung backup several times for Prince. No offense to Prince or anything, but I told them Prince should be singing backup for them. The two brothers and sisters in my show here in St Paul - Fred, JD, Jevetta (an Oscar nominee), Jearlyn - sing one song that gives me goosebumps. Every performance. They're simply stunning. And the Blind Boys of Alabama - well, 'nuff said there.

I never get tired of this show. Never. I'm never not stunned by the singing and the music, never go without goosebumps or losing my breath. I'm never not staggered by the talent oozing out of fingertips and vocal cords, filling my ears, shaking my bones.

Late last night (after our afternoon show) we went to a Minneapolis night club with good live music. Fred joined the band and ripped out a song. 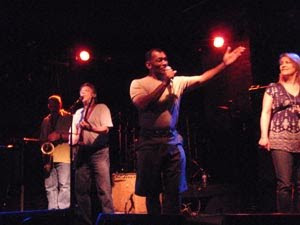 Bob got on stage and tore up the keyboards. 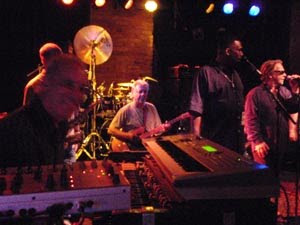 (Even the stage band was awed.) What can it be like, to be so good at something with your voice and your fingers, to be able to sing or play with someone, anyone, anywhere?

Me, I can't sing, not even in the shower; I can't really play anything (in public anyway) - I just ride horses. : )

It's wonderful to be part of this family.
Posted by The Equestrian Vagabond at 8:46 AM