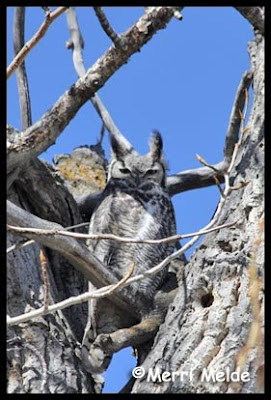 When I went out late to feed Dudley his dinner in the moonlight, I was delighted to hear a long-eared owl hooting… but then I stopped short when I realized I was also hearing the call of a saw-whet owl - !!!!

I've never heard a saw-whet owl anywhere but the forest, when out doing spotted owl surveys in Washington and Oregon. I didn't know saw-whets existed here in SW Idaho in the desert, but yes, says my expert birder friend Karen, they nest in boxes on the NCA (Birds of Prey Nat'l Conservation Area) north of here, around the Snake River.

Not much later, I heard not 1 but three screech owls, a male and 2 of last year's young.

I was so excited that I emailed Connie, who emailed back that at the same time that she thought she'd heard a pair of saw-whets tooting away up the crick. Upon further investigation of owl calls, now she thinks she heard not saw-whets but pygmy owls (!!!!!!!!!!). They aren't even supposed to be in this area, but that's what their calls sounded like.

And, if I'd felt like it, I could have hiked a hundred yards up the crick to see a pair of great horned owls, nesting in an old cottonwood (I likely would't have heard them hooting, since they are nesting, and no longer courting).

Four, maybe 5 owl species within a quarter mile of my doorstep at the same time - what a wild and crazy owl night! 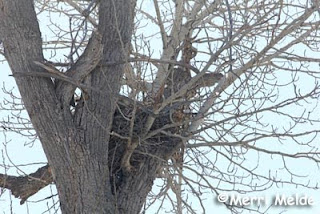 this is the great horned owl nest, and top photo, the male sitting near the nest (only the female incubates the eggs)

Posted by The Equestrian Vagabond at 3:20 PM 3 comments: