My award-winning articles have appeared in over 17 national and international magazines.
My award winning photography - which includes 60 covers - has appeared in more than 34 magazines.
I'm the author of four books and numerous e-short stories, all available on Amazon.

Published details can be found here. 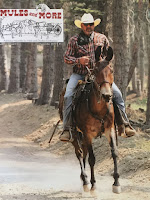 It is not for the faint of heart: a hundred hard-won miles of rock, dust, elevation, uphill (19,000 cumulative feet of climbing), downhill (22,000 cumulative feet of descending), imposing mountains, plunging canyons, wild rivers, wilderness, extreme heat, suffocating humidity, extraordinary effort, and luck - good or bad, all in various doses, riding your horse - or mule - across the Sierra Nevada mountains, in the dark and the light and the dark, all done within a 24 hour time limit. In 2010, Time magazine listed the Tevis Cup as one of the Top Ten Endurance Competitions in the world.

Starting at Robie Park near Truckee, California, and finishing in Auburn, California, the Western States Tevis trail follows a historic route of the Placer County Emigrant Road built in 1855, through the Granite Chief Wilderness, past historic mines and over old toll trails, and across the American River. Much of the trail traverses roadless and austere wilderness, reachable only by foot or horseback or helicopter, so for much of the ride, if anything untoward happens, you are on your own.

The Tevis Cup is an arduous ride - to say the least - for an equine and rider. You and your mount can never relax or let up. Discounting the two hour-hold vet checks, you have to keep on the move, steadily, for 100 miles, despite the rocks and bogs and cliffs and weather and fatigue and darkness. And no matter how good a rider you are, or how talented your equine is, you have only a little better than 50% chance of finishing the ride. If you do finish, it's likely that 50% of finishers will do so in the last 75 minutes.

Sometimes in life, you can never imagine where the twists and turns will take you.

Just five years ago, Shane Lesher had never considered the sport of Endurance riding, much less the 100-mile Tevis Cup. Nor had he ever sat astride a mule. 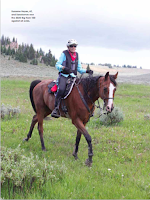 Suzanne Hayes’ extraordinary Big Horn 100 endurance ride victory came in the face of numerous challenges.
Not many people would consider climbing aboard a horse soon after breaking ribs. But not everybody is Suzanne Hayes, who won the Big Horn 100 endurance ride just six weeks after a fall that resulted in 10 broken ribs (some in multiple places), two fractured vertebrae, a punctured lung and a lacerated liver, and that led to her spending five days in the ICU and 10 more days in the hospital.
In fact, the 67-year-old Arlee, Mont., native was already discussing the possibility of riding the Big Horn—one of the toughest 100-mile endurance rides in the country— with her trauma doctors in the emergency room when they ticked off all the damage.
“I told them, ‘Well, I’ve got a really big 100-mile ride in six weeks,’” Hayes recalls. “‘I’m hoping that we can still plan on that.’ They looked at me like, ‘You gotta be kidding me.’”
Her accident happened while riding a young horse on a routine training ride. The horse stopped in a creek a quarter-mile from home to drink when he sud- denly bolted, violently ejecting Hayes. (Hayes and her husband later determined he’d received an electric shock on his sensitive nose from a live fence wire that had fallen into the creek nearby.)
COMPROMISED!
The Big Horn is one of the last old-fashioned 100-mile races.
“It’s a really difficult 100, and it takes a lot of perseverance to get through it,” says
Hayes. “You have to pay attention because it’s so remote. I just really like tough rides.” Riding the Big Horn in such a compromised state didn’t seem like a far-fetched idea
to this experienced high-mileage endurance rider. So many factors went into forging ahead with the plan that it appeared the obvious choice, the way Hayes explains it.
Read more here.
*********** 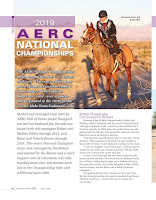 The AERC National Championships rotate around the nine U.S. regions each year. This year's edition took place October 31 and November 1 in the Mojave desert outside Ridgecrest, Calif., over a course that originated in the 1970s as the Twenty Mule Team Endurance ride.
Started and managed until 2007 by AERC Hall of Famer Jackie Bumgardner and her husband Jim, the ride continued with ride managers Robert and Melissa Ribley through 2015, and Brian and Valorie Reeves through 2019. This year's National Championships were managed by the Ribleys and assisted by the Reeves and a crack support crew of volunteers, who ably handled more than 100 starters each day in the Championship rides and additional open rides...
Read more here. 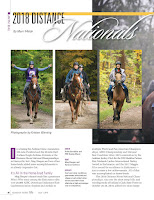 In winning the Arabian Horse Association 100-mile Purebred and the 50-mile Half-Arabian/Anglo-Arabian divisions at the Distance Horse National Championships in Henryville, Ind., Meg Sleeper and two of her home-breds added more accomplishments to an already impressive list.

It's All In the Home-bred Family
Meg Sleeper's résumé reads like a prominent Who's Who entry among the Endurance elite: over 20,000 AERC (American Endurance Ride Conference) miles; finishes and medals in World and Pan American Championships; AERC Championship and National Best Condition titles; 2015 nomination by the Arabian Jockey Club for the HH Sheikha Fatima Bint Mubarak Ladies International Darley Award in Endurance; and the 2017 Maggie Price award for excellence in Endurance - just to name a few achievements. All of that was accomplished on home-breds...
Read more here. 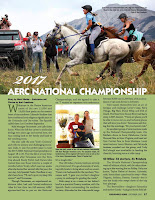 Wahatoya is the Native American name of the two 12,000 and 13,000 foot peaks on the eastern front of the southern Colorado Rockies that have traditional and religious significance to the Comanche and Ute tribes. the Spanish called them Los Combres Espanolos.
Ride Manager Tennessee Lane calls them home. When she left her career in molecular biology two years ago and moved here, she was coming back to her family and back to her ranching roots.
She also calls the area "God's Country," and with its scenery and challenging mountain trails, it was the perfect place to host the 2017 AERC National Championships on August 18 to 20. The ride fell at a busy time: two weeks after Tennessee won the Tevis Cup aboard Rusty Toth's Auli Farwa (she trained him over these trails for a couple of months before Tevis), which was two weeks after she hosted her second ride this year, the two-day July Spanish Peaks. Needless to say, she's been busy. "I'll catch up on my sleep this winter!" said Tennessee...
Read more here. 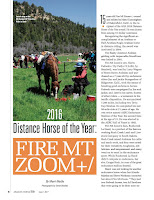 15-year-old Fire Mt Zoom+/, owned and ridden by Marci Cunningham of Bakersfield, Calif., is the recipient of the AHA 2016 Distance Horse of the Year award. He was chosen from among 15 stellar nominees.
Recognizing the significant accomplishment of an Arabian or Half-Arabian/Anglo-Arabian horse in distance riding, the award was instituted in 2004.
The flashy chestnut Arabian gelding with impeccable bloodlines was foaled in 2001.
Fire Mt Zoom's sire, Sierra Fadwah+/ (by Fadjur X Judhi, by Bezaleel), was bred by Lorry Wagner of Sierra Dawn Arabians and purchases as a 7-year-old by endurance riders Jim and Jackie Bumgardner of Ridgecrest, Calif., with the intent of breeding good endurance horses. Fadwah was campaigned by Jim and Jackie, and, later in his career, dozens of other riders - a testament to his terrific disposition. He accumulated 7,280 miles including two Tevis Cup finishes...
Read more here. 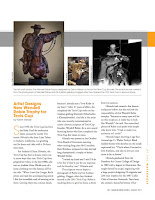 Since 1955, the Tevis Cup has been the Holy Grail for endurance riders around the world. The iconic 100-mile ride from Lake Tahoe to Auburn, California, is a grueling test for horse and rider with a 24-hour time limit.
For Auburn's Diana Hiiesalu, the Tevis Cup has been a dream come true in more ways than one. Tevis Cup fever gripped her when, in the late-1980s, she saw an Arabian Horse World cover of a horse climbing over the famous cliff in the ride. "When I saw this Cougar Rock photo and read the accompanying article I felt this incredible rush of wanting to be there. Getting there was a minor detail, because I already was a Tevis Rider in my heart..."
Read more here. 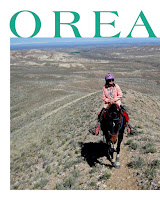 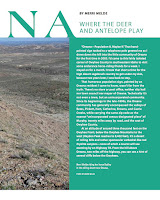 Idaho Magazine: "Oreana: Where the Deer and the Antelope Play"
Story and photos by Merri Melde

"Oreana - Population 8, Maybe 9." That hand-painted sign tacked to a telephone pole greeted me as I drove down the hill into the little community of Oreana for the first time in 2005. I'd come to this fairly isolated corner of Owyhee County in southwestern Idaho to visit some endurance horse-riding friends for a week. I stayed on for a month. It took that short a time for the  high desert sagebrush country to get under my skin, because two years later, I was back to stay.
That humorous population sign, painted by an Oreana resident I came to know, wasn't far from the truth. There's no store or post office, neither city hall nor town council nor mayor of Oreana. Technically it's not even a town, but an unincorporated community. Since its beginnings in the late-1800s, the Oreana community has generally encompassed the valleys of Bates, Pickett, Hart, Catherine, Browns, and Castle Creeks, while carrying the same zip code as the nearest "unincorporated census-designated place" of Murphy, twenty miles away by road, and the seat of Owyhee County...
Read more here.

Endurance News: "Enduring"
*This is also an excerpt from a chapter in my book, Soul Deep in Horses*
by Merri Melde

It's all Al's fault. The blistering sun. The pitch dark. The sweltering heat, blinding dust, terrifying thunderstorms, and the stinging sleet. Deadly rattlesnakes, biting gnats, icy rivers, treacherous rocks, killer bogs, and perilous cliffs. Thirst, hunger, windburn, sunburn, frozen fingers. Sweat and tears and despair. The bruises, scrapes, sore muscles, and smashed toes.
The shattered bones.
The godawful rides that last forever. The crazy horses that pull your arms out of their sockets for 50 miles. The crotchety horses that buck and toss you on your shoulder. The horse that bolts. The horse that tries to die on you.
It's all Al's fault...
Read more here. 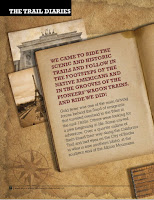 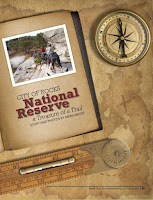 Trail Blazer Magazine: City of Rocks National Reserve: A Treasure of a Trail
Story and photos by Merri Melde

Gold fever was one of the main driving forces behind the flood of emigrants that traveled overland to the West in the mid-1800s. Others were looking for a new beginning in life. Some craved adventure. Over a quarter million of them found their way along the California Trail and laid eyes on the City of Rocks in what is now southern Idaho, at the southern end of the Albion Mountains.
The park's name came from the description of James Wilkins, an emigrant passing through in 1849, who was impressed enough by the beauty of the landscape to write about it: "We encamped at the city of the rocks, a noted place from the granitic rocks rising abruptly out of the ground. They are in a romantic valley clustered together, which gives them the appearance of a city..."
Read more here.