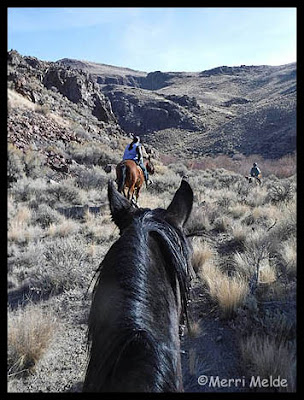 This Owyhee sagebrush flat and canyon had just a bit of a…. cougar-y feel. Not an imminent we're-going-to-get-jumped-on feeling, but… thick brush along the crick, a single path along the bottom of the high-walled canyon, rock shelters and lairs and mini-caves above, the cool stillness of a fall day, pregnant with the feeling of possibility and opportunity springing forth.

And that was before, about 20 minutes into our ride, Karen said, "Did I tell you last time we came here to hike this trail I saw a cougar print?" 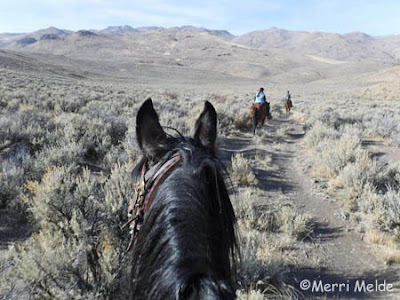 Dudley and I had hitched a ride with Leah and her mustang Bear, and Karen and her former endurance horse Rusty, to explore Perjue Canyon in the Little Jacks Creek Wilderness. Rusty charged eagerly ahead on the trail, unafraid of anything (his only nemesis is cows), and Bear followed, completely unflappable (I expect if he ran into a cougar, he'd Stink-eye it away), followed by Dudley. The Dude wasn't nervous, but one time in the canyon he did stop and whip his head around behind him and he studied the brush along the crick a while. Dudley always sees wildlife before I do so I always wait to see what he's spotted; this time he didn't actually see anything. But Dudley knew that here it didn't hurt to check. 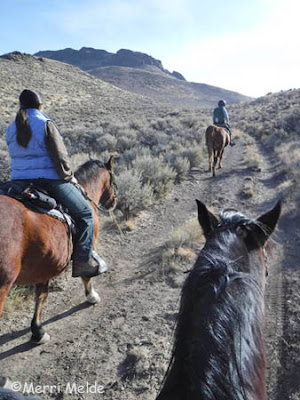 I wasn't nervous, but I've learned over the years, if it feels like cougar country, it is cougar country. Doesn't hurt to keep your eyes peeled at the brush, the rock outcroppings you're riding under, and glance behind you now and then. Cougars aren't particularly numerous out here, but they are here. 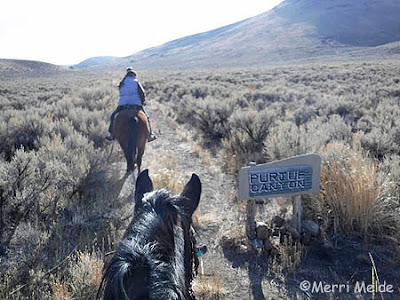 While the canyons in the Owyhee country don't have the flair and grandeur of Utah's red canyon country, ours can still be a little bit spectacular, much less traveled, and intriguing to explore, particularly on foot. If there aren't trails down in all of them, there are usually plenty of old two-track roads to get you cross-country and at least above those canyons.

Closer to the cities, the red rhyolite-walled Sinker Canyon can certainly be called spectacular; it's a popular place for ATVs (so if you're going horseback, you want to go mid-week, and preferably when schools are in session), and a side trip on your way to Silver City. 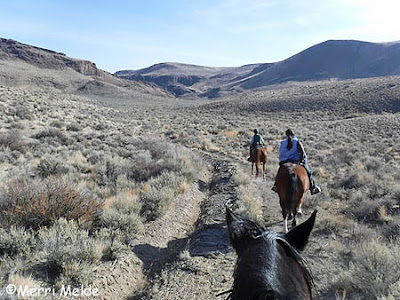 Perjue is further out - a good hour further out, on a good-but-washboard Mud Flat dirt road that is part of a scenic Owyhee Uplands Backcountry Byway over the Owyhee mountains that eventually dumps you out at Jordan Valley, Oregon. 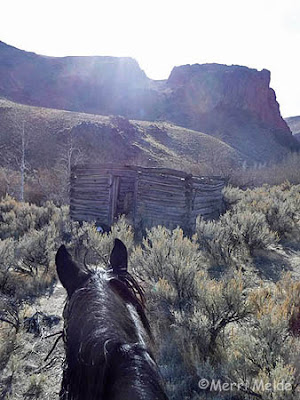 The canyon is named after Frank Perjue, whose old cabin walls still stand near the approach to the canyon. He probably homesteaded cattle (or sheep?) here in the early 1900's, and it was probably his livestock that originally laid the trail that we rode on. Perjue Canyon follows the West Fork of Shoofly Creek. 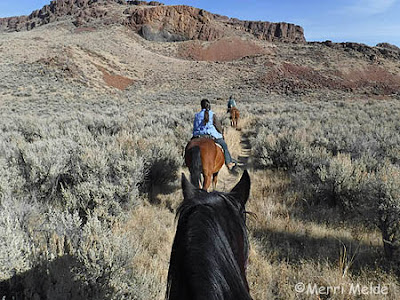 The Little Jacks Creek Wilderness (over 50,000 acres) is 1 of the 6 wilderness areas in Owyhee County, designated in 2009. BLM, Idaho Trails Association and other volunteer groups worked on developing this trail in Perjue Canyon. It's an out-and-back trail 4 miles down the West Fork of the Shoofly Crick, where it ends at private property (we were hoping for an obvious loop trail, but nothing obvious appeared, but with more exploring, there might be options), and 4 miles back. 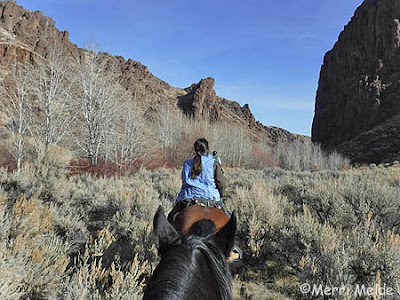 At places, cottonwoods crowd the trail, and thick quail bush clusters along the narrowing canyon. We were past the time of golden autumn leaves, but during the height of color, the cottonwoods along the crick must be stunning yellow, and the quail bush deep maroon. And, at the right time of year, you can see bighorn sheep in and above the canyon. 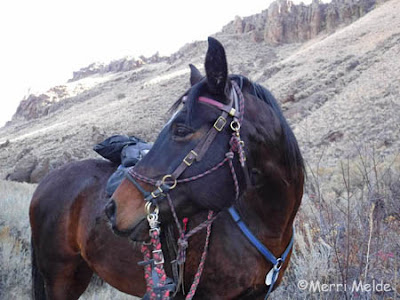 We had a bit of water in the crick that we crossed several times (ice, actually), but the brush looks thick enough that there may be some water puddles year round. It's an easy day hike for Owyhee hikers (and a BLM picnic area and vault toilet is about a mile down the road), and an easy exploring ride for trail riders. There was enough up and down, and a bit of scrambling over shale at a few places, and long enough to make Dudley sweat, even in the cold, though as endurance riders we wouldn't have minded another 10 miles or so, for the long trailer ride we took to get there.

But it was another cool new checkmark I can put on my Owyhee country map, and Dudley had a good time and a good workout! 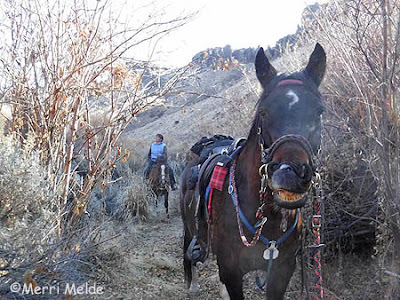 Posted by The Equestrian Vagabond at 4:14 PM No comments: