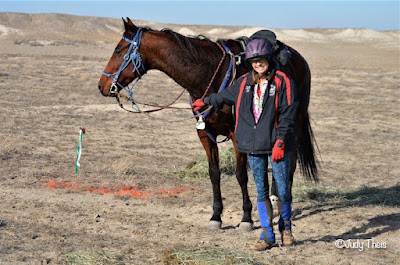 PART I is here.

Willie still did not drink at the finish. I did not like that. That is not normal. He passed his vet check (with a 54 pulse, not unusual, particularly with his winter coat).

But I did not like that look in his eye. And back in his pen, he wanted to roll. That is NOT NORMAL for him. I called Jessica and Jake the vets over. They listened to his gut sounds again and heard gas in the upper right quadrant. “If he wants to lay down or roll, let him,” they said. “It can help move things around so the gas can pass.”

But it didn’t help, and after a while, when Wilie got up and still looked uncomfortable (pulse was high 40s - still good), he got a muscle relaxer shot.

That seemed to help. The pain left his eyes, he started eating normally, took a drink, and his pulse dropped to the low 40s (normal for him after a ride).

But after an hour, the pain came back. His eyes showed pain. He laid down again. Rolled some, and laid there, higher respiration. When he got up again, vets checked him out again. Movement in all gut quadrants except for that upper gassy right. Pulse up to 52. Not good sign. I started feeling sick. Give him the works, I agreed.

He got Nasogastric intubation, to quickly get electrolytes and fluid directly into the digestive system, to help get things rehydrated and moving.

There was no reflux (a good thing). After a while there wasn’t much of a change for the worse or better, so we set him up for fluids. Got him going on 10 liters. Time passed. It got dark. Jake had to leave, but Jessica sat with me in his pen watching him as the hours passed, waiting waiting waiting praying and waiting for a poop (not so unusual waiting for that after a ride where they’ve been steadily pooping all day a little at a time; Barack in the next pen had not pooped yet either).

Willie started eating a bit, his pulse remained in the 40s, and the gut quadrants had more activity… but the upper right still gassy.

Willie started shifting his weight around at 10 PM; Jessica said let’s take him for a walk and see if that will help him poop. She unhooked him from the fluids, and we took Willie and Barack for a walk… and  within a few minutes, I have never been happier to see a pile of (good looking normal) poop come out of Willie’s rear end! (Barack pooped too!).

But when we returned to the pen, Willie went right to laying down. He got up and laid down 3 times. I was getting nauseous. Jessica said to wait just a little longer. And finally,FINALLY you could see Willie relax, tension leave his body. When he got up again, his pulse was still in low 40s, still movement in quadrants, still some gas in upper right, but a little better. She hooked him back up to the fluids and Willie went back to eating - like a normal hungry-after-a-ride horse. And he took a good drink! And he farted! Twice! And he peed!

All signs pointed to him having recovered. When the fluids finished, Jess unhooked him and we turned him loose, and he walked to the side of his pen, and dropped off another big pile of good looking steaming poop! And all good gut sounds!

Well, try to go to sleep after that. I didn’t really sleep, but didn’t hear my alarm at 3. I got up at 4 to check on Willie, and he was dozing, and I was excited to see 3 or 4 more piles of poop in his pen.

In the morning he had even more piles, and was eating and acting like a normal horse.

Thank the lord. But what the hell happened. What caused it? Gas colic is the simplest and most common type of colic; it can happen to a pasture horse. A horse has almost 70 feet of small intestine and about 25 feet of large intestine, so he’s got a helluva lot of space where gas (or kinks or blockages) can build up. Any kind of blockage can occur anywhere, and when a horse is exercising, fluids are pulled away from the gut to the muscles, so that dehydration can exacerbate the situation. You’ve all had gas cramps at one time or another, and they can be quite painful till they resolve. Can you pinpoint a cause?

What could I have done to change it? (besides not riding at all). We certainly didn’t ride fast (we finished in 8 1/2 hours; he’s previously done this ride 1 1/2 hours faster). He hasn't had a hard season - this was only his 5th ride this year. He drank well on trail - until he didn’t midway on the last loop. He ate and drank great at lunch. We always let the horses eat hay for a while before we give them any grain at lunch, and that is a wet mash. I gave him the normal amount of electrolytes I’ve always given him - a scoop in each feeding (once a day, and as much as he wanted to eat at lunch, after eating hay first), starting 2 days before.

Should I have let him go faster? He felt so phenomenal the whole ride, maybe I added more stress to him by keeping him cranked down much of the ride. Did his winter coat have anything to do with it? (He’s done rides with a winter coat before, on hotter days.)

When he didn’t drink at the second water tank he should have dunked his head into, I could have stopped and gotten off and walked to camp - but that would have taken me longer to get back on foot, not to mention the stress of being separated from his buddy.

Was it just a random thing? Who knows. It all just sucked. I even hate reliving it by writing about it.

I’m just kicking myself - what caused it and how could I have prevented this? (beside not riding)

I don’t know if I will ever want to ride him on a 50 again. It may be so stressful for me (like if he doesn’t drink at a water tank) it may not be worth it. Maybe he will just be a 25-mile horse. Maybe he’ll just be a trail horse.

So, our great accomplishment turned into a not-good-then-thankfully-ultimately-good-depending-on-your-perspective long-a$$ day.

And he’s fine now and says thanks to all for your concern!

Posted by The Equestrian Vagabond at 11:21 AM 5 comments: 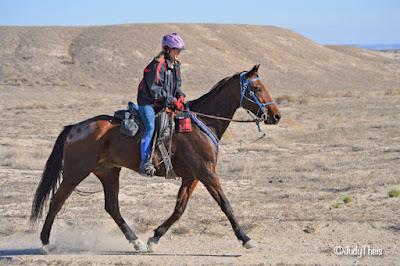 Be sure and read Part II when it comes out tomorrow.

He’s got a bit of a winter coat, but he’s super fit, and he’s riding with his best bro DWA Barack. Since it was the Owyhee Halloween ride I started to dress Willie as an Appaloosa, but I got halfway done on each side of his butt, and it looked more like a…. spider web and not really even a good spider web, and then he went and rolled, so I gave up. So he really went as a 1/4 Appaloosa, 3/4 Standardbred. 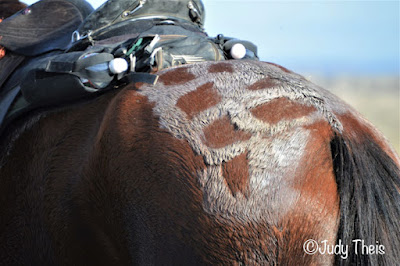 After his Autumn Sun start last month, this start had me a bit nervous… I didn’t know if Willie would be a firecracker again or good - but this start was so good. The two boys walked out of camp together and calmly started trotting down the 3 miles of long straight dirt road, despite being able to see other horses and riders ahead of us. It wasn’t a big field of riders - 14 in the 50 (and 12 in the 25), the weather was perfect - stayed cool all day - and footing spectacular. 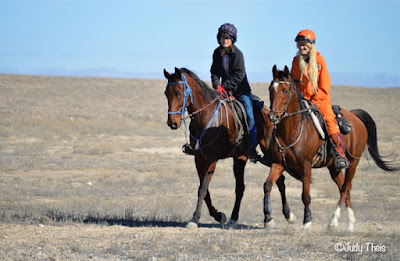 I rode with Convict Connie, Dept of Corrections

All day I marveled at Willie. He really seemed to be enjoying himself. This horse was born for the trails, not the racetrack. So strong and forward and always wanting to go faster. Even when we were headed towards home (basecamp is 10 miles from home, and we rode within 2 miles of home) and then turned away, Willie was like, “Yep, headed this way now, let’s go!” He drank well on trail, found tiny bits of grass growing along trail to snack on (often he is all business and won’t take time to munch, but this ride he allowed himself the leisure of grass snacking as long as Barack was doing it too!). He ate and drank well at the lunch break, and he bombed out on loop 2 with the same relish. 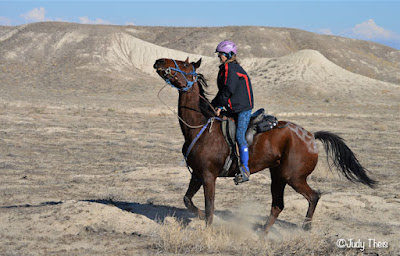 All systems were go… although Willie didn’t drink at the second-to-last water trough out on trail. Nor the last one. Hmmm. He should have dunked half his head in and drunk. But at the last trough we were almost within sight of the finish and Ridecamp, so maybe he was just waiting for that.

He finished strong, and this marvelous Standardbred completed the ride, 9000 miles for me (and The Raven!), 1000 miles for Hillbillie Willie! 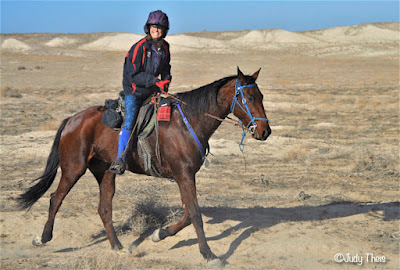 Posted by The Equestrian Vagabond at 3:03 PM 2 comments: