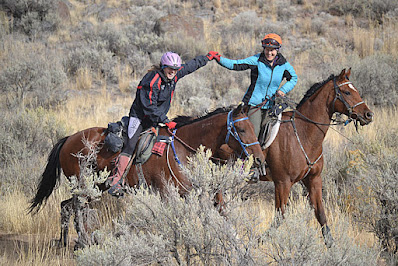 Any minute now… I thought, as I walked a lit firecracker around Ridecamp. Hillbillie Willie pranced beside me, neck bowed, eyeballs rolled forward, as a long squeal like I’ve never heard - like 20 seconds long, Eeeeeeeeeeeeeeeeeeeeeeeeeeee! - slipped out between his curled lips. He was just on the edge of exploding.

This would be my fourth year shooting the Autumn Sun Pioneer ride, but gosh, I sure wanted to ride Hillbillie Willie there one day. I’m not sure if Ride Manager Jessica Huber suggested it or if I did; it became a plan. This year I’d shoot 2 days and ride 1 day.

Willie’s pals DWA Barack and DWA Saruq accompanied him to Ridecamp. The plan was that Willie and Barack would ride on opposite days, so Saruq would be the babysitter with the one left in camp. That didn’t quite turn out as planned, and it was Saruq that could have used the babysitter on day 3, as that was the day Willie and Barack went out together on Sunday on the 50.

Which meant that Willie was in a small pen for 3 days, and he just about couldn’t stand himself, especially when I took him out to walk by himself, away from his buddies.

I’ve ridden this horse in Endurance for 5 seasons now, and he’d never been so tightly wound, and so buddied up with his bros. I ride him by himself all the time at home and he’s just fine, but this time that just didn’t translate to Ridecamp.

I saddled him up Saturday afternoon for a pre-ride warmup, climbed aboard the sizzling firecracker, and trotted him out of camp, and up the road, hoping he would just trot and not prop and buck! Fortunately his legs are so long that it’s not easy for him to buck, and it’s just easier to channel that energy forward, so LET’S GO! I told him. Blow off some of that steam. Defuse that bomb about to detonate! It wasn’t a long warm-up ride, but it did take a little of the stuffing out of him (and I stayed on!), and he was a little calmer back in camp.

At the start of Day 3’s 50, he was happy, since he was headed out on trail with his best bro Barack. (And Barack had done Day 2’s 30-miler, so he was like - eh, whatever.) But I was back aboard an electrical shorting fuse the first few miles of the ride. When Willie is hot, he bows his neck like a tough racehorse (keep in mind the Standardbred racehorses go with their heads high up in the air). He looks like he’s pulling hard but he really doesn’t, but with every stride he slipped along faster and faster, and I kept having to check him. I finally had to stuff him behind Barack for a while, and once we started climbing up the canyon, and the boys started huffing and puffing, the real Hillbillie Willie started to come back to earth, a forward, energetic horse, going along on a loose rein (most of the time). 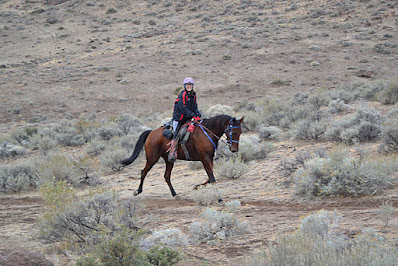 I lucked out riding Day 3, with loop 1 being one of the most scenic trails of Autumn Sun. This trail is what gave Ride Manager Jessica Huber the idea to put on a ride here. Winding up through a series of canyons, on a trail far below rhyolite cliffs and rock formations, Willie watched his footing on the trail while I scanned the ridges for a cougar, like Tracy and Tom saw last year. I didn’t see any, but, like my Forest Service ranger friend once told me when I complained I never saw any cougars, “Oh, but they see you!”

Some of the trails were lava rocky and technical, requiring a horse to walk and pay attention, much of the trails were smooth 2-track where you could move out on. Willie and Barack worked well together, rotating being in front and behind and beside each other (though Willie always erred on the faster side of trotting), and while Willie tends to take a ride VERY SERIOUSLY, he’s learned from Barack that sometimes it’s OK to stop and grab a few bites of grass, or at least grab them on the go.

On one stretch the ranchers’ cow water troughs we were allowed to use were empty - the ranchers had just drained them a few days before for the winter. Willie was thirsty, and he was terribly disappointed to find the bottom of one trough covered in cow pies (likely the cows' opinions on the empty water trough!), and by God Willie made his way over to an icky looking cow pond where he sunk to his ankles in cow muck as he sucked down the murky liquid. At home we liked to keep our water buckets and troughs so clean, but this was good wild desert water (next year’s ride will be a week earlier, so the springs/cow troughs will still have water).

The weather was perfect, not too hot, not too cold, trail conditions perfect. We crossed the finish line tying for last place, tying for the coveted Turtle Award (fun turtle aprons made and donated by Lynn White), and just for grins I showed Willie for Best Condition (knowing we had no chance at that, since I’m a featherweight and we finished almost 2 1/2 hours behind the winners).

And what a super surprise and treat, High Vet Score went to Hillbillie Willie! 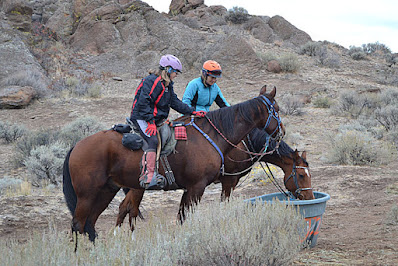 Jessica's dad Wally Bodenhofer took the pix on day 3 so I could ride. Yay!

Posted by The Equestrian Vagabond at 10:48 AM