Some people take their dog for a walk every day. How boring.

Neighbor Linda takes her whole Menagerie for a walk (and she only needs one halter!): Mama the miniature horse, Holler her baby mini-mule, Bee the Border collie, Goat Dog the dog, and Edna the donkey.

Edna loves Goat Dog and she follows him everywhere. They roam Linda's property... and sometimes beyond... and Edna won't come back unless Goat Dog does.


Sometimes the gang comes over for a visit, stays a while, startles the neighbors ("what the hell is that!?"),

and then they head home.

It may seem odd to some people, but Linda and her Menagerie fit right in with us folks on the crick.

Posted by The Equestrian Vagabond at 4:13 PM 13 comments:

This is what I love about endurance riding in this country:

You can name a trail the Booby Rock Trail. Could you do this in an FEI ride in France or the UAE? I don't think so.

You can follow your long shadows to the Owyhee mountains and back in a day.

You can race the 50 miles if you have those competitive bones in your body; you can win and tie with three old endurance friends (and get a pair of cool sunglasses for your award), like Bill and Sue and Lee.

You can ride slow and finish last or close to it every ride - and not only get the occasional really cool Turtle Award for doing so, but you might have a 5000+ mile horse that you hope to do 10,000 miles on, like Carla and the Khid, who came from Colorado to do the two days.

You can ride with a friend whose horse reaches 3000 miles, like Nance and Quinn!

You can ride to see some great scenery - even if you live here and get to ride here all the time and marvel at it every day.
[slide show here:]


You can have a horse that gets Best Condition almost every time he's ridden: Fire Mt Malabar has six starts this year and six Best Conditions (Day One here with Lee, Day 2 with his wife Naomi); you can ride a horse to her 6000 miles, like Annerose Carlisle did with Ginger. (Annerose thought Ginger got 6000 miles at the Fandango in May, but she was 10 miles short. On Day 1 here, she got it!) You can come and do trail rides if you don't want to ride 25 or 50 miles. We love to have you! You can come and do your first 50 mile ride, like Judy and Milan from California, or or Estelle from South Africa, and Shim Sham!

You can ride your horse that you just love love love on his first two LDs like Linda and Ted!

If you're a horse, you can wallow in some mighty fine grass after 50 or 100 miles.

You can drink some wine and tell tall tales, and you can have great dinners:

and you can act silly.

If you're lucky, you get to ride someone else's horse, A THOUSAND MILES TOGETHER, like me and Jose and the Raven - THANK YOU STEPH AND JOSE!

If you're lucky, you can just come to an Owyhee ride, and have fun!
Posted by The Equestrian Vagabond at 2:27 PM 9 comments: 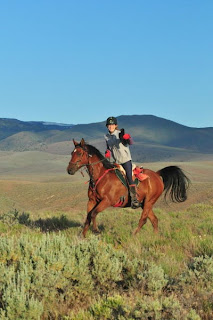 We finished Day 2! 1000 miles completed together with me and Jose and the Raven!

Bottom photo by Neil Smallwood who with his wife Liz came down just to volunteer all weekend!

More after a week (or so) of sleeping! 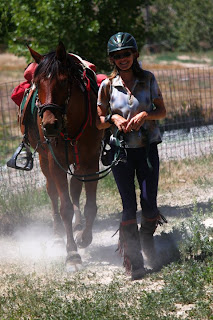 Posted by The Equestrian Vagabond at 8:54 PM 15 comments:

Top photo - Me and Jose: another completion, and 990 miles together! Still holding our breath for our ride tomorrow.

So much water in the desert!

Frills for Jose and the boys after a hard day's work.

Frills for the riders - the best pot luck dinner ever!

No Frills ride awards for participants!

More No Frills - John and Robert the vet get the Hoedown on!
Posted by The Equestrian Vagabond at 8:33 PM 6 comments:

Ready For Some Cheap Thrills

A decent little group turned up for this weekend's Cheap Thrills No Frills endurance ride; tomorrow there are about 35 riders in the 50, 8 in the 25, and a couple of trail riders.

It feels like a family affair again, just a bunch of friends with a common obsession getting together to have a trail ride - a long trail ride for a long weekend. Our friend Sue from Utah finally made it, after truck troubles and broken hand problems kept getting in the way for two years. Carla and the Khid are here from Colorado. Estelle is here from South Africa! (Though she's been living in Idaho the last year, she still gets the Farthest Traveller Award.)

The humans may get No Frills here, but the horses are in heaven with the special grass pasture Steph grew and opened for grazing. We call it our little Sierra del Rio pasture, in honor of the Sierra del Rio Ranch on the Oregon Trail that lets us use their ranch and grass pasture for our out vet checks on our May ride.

Jose is ready raring to go. I just recently realized I have 940 miles on him. The plan is for me to ride him both days on the 50s. That's all I'm saying about that right now, but I'll be holding my breath for two days.

The forecast is for 72* and no thunderstorms tomorrow. Bring on the Cheap Thrills!

Posted by The Equestrian Vagabond at 8:26 PM 2 comments:

Today their assignment was to mark the last bit of trail (as in, a whole 3/4 mile of trail) for the 2-day Owyhee Cheap Thrills No Frills endurance ride this weekend.

Tex had never worn a Hula Skirt before. It didn't faze him in the least.

Besides, his Bud Stormy was wearing one and it didn't bother him at all.

The boys did the hard work - standing still - while Linda and I untangled and picked out the right ribbons to pin onto the bushes in the correct directions.

Having completed their assignment, the boys surveyed a job well done. They'll sleep well tonight, knowing riders won't get lost for their hard work (on 3/4 of a mile of trail!).

Not to scare you or anything, but this is just two days of Owyhee Cheap Thrills No Frills endurance rides. Steph emailed me this map (with "trail colors omg" as the subject line) so we can hang the right color ribbons going in and out of basecamp.

Confusing? Only if you're trying to hang all the ribbons, in and out directions, at the same time. Shouldn't be confusing if you're riding, as the ribbons will be pretty clear, and there are pie plates galore directing you where to go, for reassurance. Some even tell you what to watch out for, like deep sand and gopher holes.

I have this mishmash to hang out (Stormy will do his share tomorrow!); Connie and Judy have one trail to check; and Steph will re-ride one more trail to check up on it - and then we are set.

It's demoralizingly hot today, in the 90's - Owyhee seems to be lying lethargically, waiting for a thunderstorm to happen or something - but Saturday and Sunday will be in the mid to high 70's, with no thunderstorms predicted. Couldn't be more perfect for some cheap thrills on another Owyhee endurance ride!

One more word about the ride: pay attention to the name: Cheap Thrills, No Frills. Two days of fun trails (especially the "Booby Rock" loop), good scenery, and potluck dinners. The hot showers probably will work, and if not, there are plenty of garden hoses around. If you're coming expecting to win a 4x4 Toyota Pickup when you cross the finish line as the winner each day, and to win saddles for your Top Ten finish awards, lower your expectations a bit. The ride awards will give you a cheap thrill, though they will be memorable.

Posted by The Equestrian Vagabond at 8:59 PM 2 comments:

Finneas and I were riding back to our home canyon after marking trail for next weekend's Cheap Thrills ride, when, approaching the trail down off the ridge, we saw an agitated prairie falcon, screeching and diving at something on the ground just out of sight over the ridge. It was making enough of a commotion that Finneas noticed and watched it.

Must be another raptor? Or a coyote? Something eating its young? (Prairie falcons nest on cliffs, not on sagebrush-covered ground, and the nearest cliffs were 3/4 mile away.)

Finneas and I walked to the edge of the rim and stood there looking down and watching. We didn't see anything, but here came the falcon again, "kree-kree-Kree-Kree-KREE-KREE-KREE-KREE!" Swoop! on the sage-covered slope below us.

The falcon's claws grazed a sagebrush - and something flopped up - an owl - a juvenile Great Horned Owl! It disappeared behind the sagebrush again, but I could just see his feathers. Finneas was snorting because he'd seen not a bird but a monster. He was sure we should flee, but I made him stand there with me a while to watch. Was the owl hurt?

The prairie falcon flew to another ridge, still screeching, then shortly he made another round and dive-bombed at the owl. It flapped and jumped again, but stayed put.

We left, so as to not stress it more, but I worried about it. Why was this owl on the ground, far from the nearest tree (about a half mile), and farther still from his likely nest spot (about 3/4 mile at the least), from which he probably fledged over a month ago?

Then I remembered Steph saying two days earlier, she and Judy had seen a hawk yelling at and chasing an owl - on the ground, very near here, but she was pretty sure the owl had flown off the ground and toward the canyon. Was this the same owl? Was he injured? Lost? Abandoned? What's he doing out here on the ground in the daylight again?

Later in the day I went out prepared for an owl rescue, and hiked back to where I'd seen the owl. I first saw the prairie falcon, chasing two Ravens; just a few minutes later, I saw two Ravens chasing an immature golden eagle! But the falcon wasn't harrassing the owl anymore - if it was still there.

I saw no sign of it - until I got within 30 feet - at which point he jumped up in the air. He was in the same spot where Finneas and I had seen him; he flapped his wings 2 or 3 times and came back down on the other side of the sage. There was no visible damage to his wings, no obvious injury that I could see.

He was probably 'grounded.' I'd consulted with my bird biologist friend Karen, who said the parents may have overfed it, and he's just too full to fly. Just his luck a prairie falcon found him because "prairie falcons HATE Great Horned Owls, because GHOs kill prairie falcon fledglings," Karen said.

I took some pictures then moved away, leaving him alone. He was panting from the heat and I didn't want to stress him more by staying too long or getting closer. I worried about him, but I probably didn't need to, because Mother Nature was taking care of him. The desert-colored owl blended perfectly with his surroundings, and unless something like an eagle flies within a few feet of him, or a coyote passes within a few feet of him, they'll never see him. I was just lucky I got to.

Posted by The Equestrian Vagabond at 8:40 PM 11 comments: