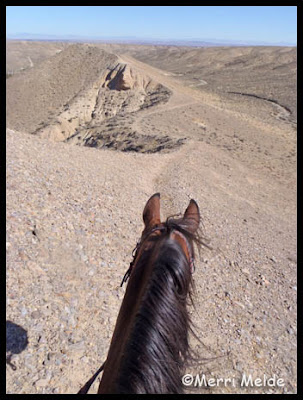 "Get off the web and into the wild" is the campaign of the PNTS - Partnership for the National Trails System. PNTS is encouraging people to "pledge to turn your gaze from your phone and computer screen to your natural surroundings and explore a park, trail, wildlife refuge, or forest near you - even your backyard. You never know what you might discover!"

Easy for me - Hillbillie Willie and I get into the wild on a regular basis. We're surrounded by BLM high sagebrush desert, 6 miles below the Owyhee mountains, in the southwest corner of Idaho, in one of the least populated counties. On just about every ride we see some kind of wildlife: deer, antelope, sage grouse, chukar, coyotes. Willie - the off-the-track Standardbred racehorse - is quite sensible and doesn't get alarmed: he enjoys encountering the wildlife too.
The very day I took the PNTS pledge, Willie and I had a fabulous National Geographic moment.

As we started riding down the narrow and at-places-steep Tower Trail ridge, we surprised a herd of 8 mule deer in a fold of the hills below us. We stared at each other momentarily, till the deer decided to evacuate. However, instead of moving downhill away from us, the lead doe angled straight ahead and up, aiming for the trail we were on. As we popped around a little corner, the herd had just reached the narrow trail 15 yards ahead of us; their sensible option was to run on down the trail, or to seemingly irrationally leap over the precipice down the 80-degree cliff.

There was a moment's hesitation before the lead doe committed: then she hurled herself over the edge. One by one the others followed unquestioningly - like a waterfall over a cliff - catapulting, catching air, landing 20 feet down the slope before touching ground again. The adrenaline enveloped the herd as they hurtled downward; when one stumbled she'd leap and fly another 30 feet downhill; when another almost fell down she sprinted faster down the hill with the others rocketing recklessly after. The herd's mad charge left dust curling down the cliff and they were gone before Willie even got to their leaping platform.

If I can anthropomorphize here a bit, there may have been a touch of prey-fear in the deer, but what I really sensed was arrogance - their utterly unrivaled and untouchable grace and speed, knowing that, even if this little human had wanted to, I did not have the capable mount, nor the guts, to follow them; and even if I was the Man from Snowy River and gave chase over the cliff on my horse, I could not have gotten anywhere close to them. The deer picked the steepest cliff - because they could.

A camera would have gotten a fabulous video, but I had my hands full with an excited horse! Willie gave off his own excited Deer Snort and I had to use a bit of focused riding to keep him on the trail.

It was an extraordinary deer encounter neither of us will ever forget! 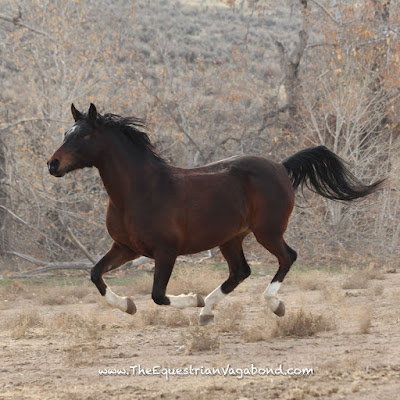 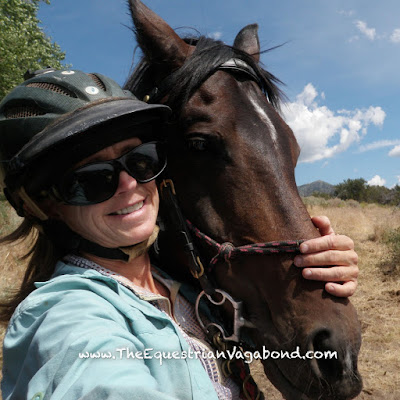 Posted by The Equestrian Vagabond at 6:37 PM 3 comments:

Another Tough Sucker for Hillbillie Willie 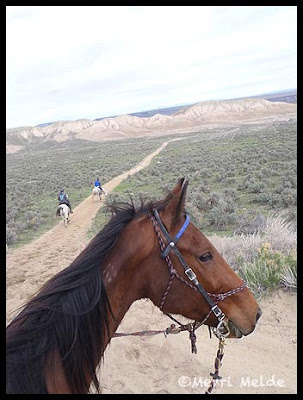 Monday April 8 2019
Hilbillie Willie had a terrific seasonal debut in the Owyhee Tough Sucker 50 mile ride this weekend.
We rode with "Uncle Mal" and Naomi, "Cousin Hawk" and Lee, perfect mentors for this young whippersnapper Standardbred racehorse-turned-endurance horse.
Here are a few shots from the scenic (green!) desert ride along the Snake River, around Wild Horse Butte, over the Oregon Trail. 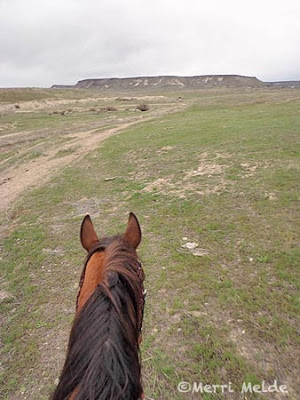 Wild Horse Butte ahead
Love the long Standie neck, no? 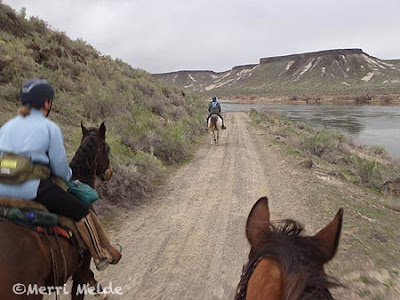 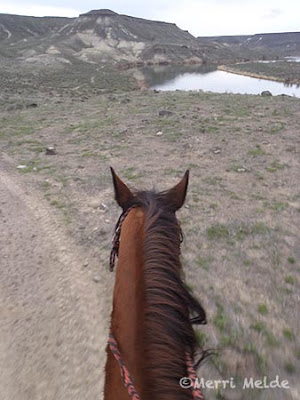 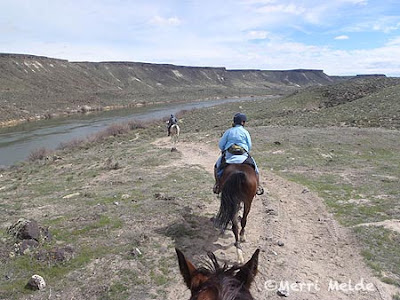 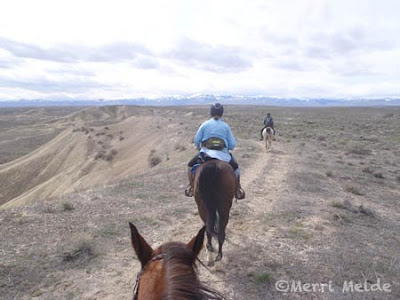 on the Hallelujah trail, looking at the Owyhee mountains
Willie's ride story is here on Endurance.net
Posted by The Equestrian Vagabond at 8:37 AM 1 comment: