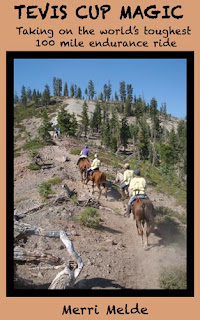 It is not for the faint of heart: a hundred hard-won miles of rock, dust, elevation, uphill (19,000 cumulative feet of climbing), downhill (22,000 cumulative feet of descending), imposing mountains, plunging canyons, wild rivers, wilderness, extreme heat, suffocating humidity, extraordinary effort, and luck - good or bad, all in various doses, riding your horse across the Sierra Nevada mountains, in the dark and the light and the dark, all done within a 24 hour time limit…

With the 2016 Tevis countdown at just over two months to starting time comes the release of my new ebook, Tevis Cup Magic: Taking on the World's Toughest 100 Mile Endurance Ride.

It's my account of my monumental, magical, marvelous Tevis Cup adventure in 2009. It's not a story of a Top Ten finisher; it's not a story of someone who spent weeks, months, years strategically planning to conquer the Tevis trail. It's one of those adventures I had never, ever planned on; another one that just fell in my lap and I just had to fly by the seat of my pants. It's an epic story with a bit of excitement, tension, slight madness, humor, and that ol' Tevis Luck doled out by the Tevis Gods - good or bad. And, of course, it's with The Raven.

Some of you may have originally read it as a series of entries on my blog, but I've compiled it into an ebook short story, enhanced with additional material, and a few photos, edited by my co-conspirator and brilliant writer and editor friend, Marsha Hayes.

It won't be available as a hard copy book - only an ebook!

Posted by The Equestrian Vagabond at 6:30 PM 10 comments: 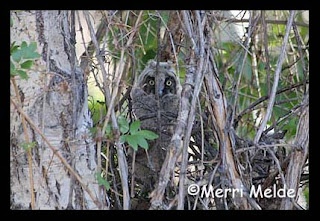 What a great owl spring it is.

It's been years since long-eared owls inhabited the upper crick, so it was a treat to finally see a pair back. Used to be there were half a dozen that day-roosted in the thick vine-draped cottonwoods along the crick. I even found a nest one year, with two babies on it.

These owls are quite skittish. If they weren't - if they wouldn't flush away from me, I likely would not have noticed them. Even with very careful searching, if they don't move, it is unlikely you're going to spot a long-eared owl. They are very difficult to see when they want to look like a tree. You almost have to train your eyes to see them before they materialize in front of you, kind of like those 3-D drawings where you have to let your eyes focus on another dimension before you see the picture in the patterns. 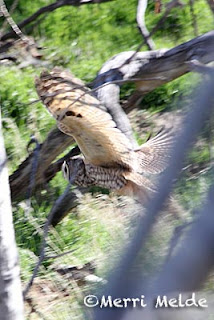 After flushing this pair a couple of times, and after searching carefully up the crick and spying what I thought *had* to be owl nests, though I could not see owls on them, I picked a cloudy day (for better lighting), grabbed my binoculars and camera, and crept up the crick hunting for owl nests (while keeping my eyes peeled for a cougar!). 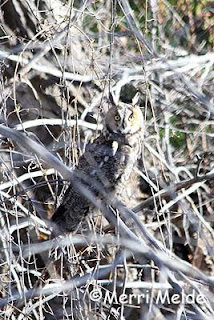 I snuck up the crick (though really, with owls, there is no sneaking. They see you long before you might see them) to where the owls usually hang out. I'd take a few steps and stop, look with my eyes, peer through the binos, and think like an owl. Creep a few more steps, search, think owl.

The thick vines are sometimes impossible to see into or through. So I studied spots which could possibly be long eared owl nests. Which should be owl nests. I found a forked tree trunk draped with vines that even 20 feet away from, using the binos, I could not see into. But it felt like an owl nest - had to be an owl nest - and after 5 minutes of studying this drape of vines from different angles, I realized I had been looking at a long eared owl on the nest the whole time! 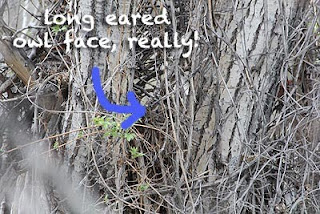 Incredible how camouflaged they can be.

Once I figured out for sure this was an occupied nest, I moved away. Heading further up-crick, I wanted to see if I'd flush her partner. There's a tree limb that's covered with owl poo, so obviously an owl roosts there. I crept up to that one very slowly, trying to see a perched owl, but despite my intense searching and gazing, I did not see the owl before he flushed. I found it very odd that he flushed upstream, instead of downstream to the occupied nest. Then it crossed my mind to check a couple of the possible nests I'd seen there earlier.

And sure enough - with the good lighting - I was staring right at another occupied long eared owl nest! I was only 20 feet away from this one so as soon as I snapped a few pictures, I left her alone. 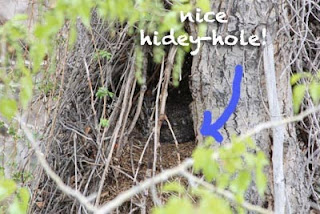 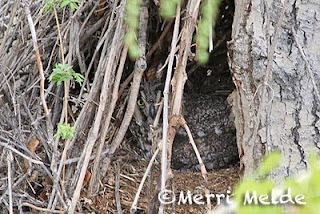 And today, mama owl still sits on this nest, but on the first one, look at what I found peering at me, sitting above his nest! There may have been more than one spud, but this one was obvious. I didn't hang around long, because mom was distressed, flying away and trying to lure me away from the nest. (This little spud is pictured up top also.) 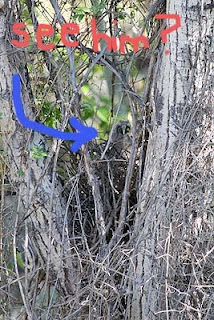 More owl news is the pair of BARN OWLS day-roosting in a neighbor's empty barn. Eight years here and I have never seen barn owls here. This pair is also very skittish. They don't seem to be nesting in the barn. We tried to creep up on these owls one day, but one flushed into some trees along the crick - and I was lucky to spot him. We searched the barn, and peered in and around some large stacked hay bales, and other nooks and crannies that barn owls like, but didn't find a nest. I'll have to do more snooping around. 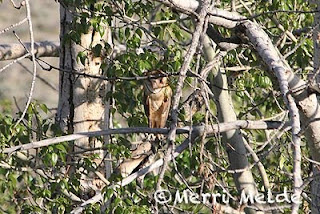 There are also some great horned owls nesting up the other crick. 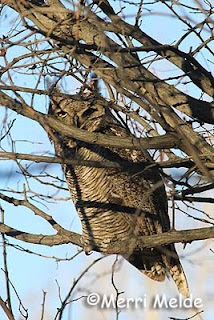 And I'm sure the resident screech owls are also nesting, but after 8 years I have still not found their nest! The male toots at night, and some days he'll roost in a big tree in the back yard. 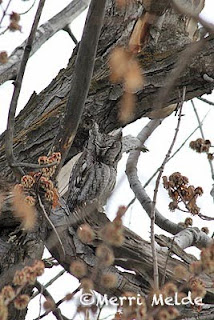 Posted by The Equestrian Vagabond at 8:38 PM 4 comments: 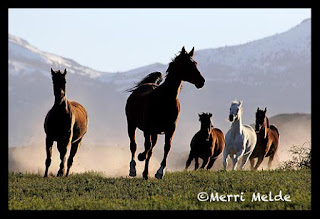 I love it when the herd answers my whistles and comes thundering down from the canyon when I call them back for the night.

Here Jose leads the gang, with the still-snow-covered Owyhees as a gorgeous backdrop in the evening sun.

Posted by The Equestrian Vagabond at 6:26 PM 2 comments: