Hillbillie Willie and the Mormon Crickets 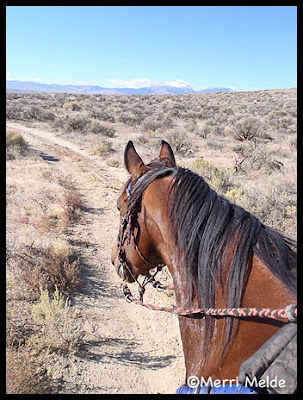 GAAAAHHHH - a new mormon cricket hatch, a swarm of millions!

I couldn't believe my eyes when I saw the ground starting to move ahead of trotting Willie - we'd powered up the Rim Trail and rejoined Spring Ranch road, heading toward the Owyhee mountains when it began. But it wasn't the ground moving; it was a million little inch-long crawling jumping flopping things - baby mormon crickets!

In some cases, baby animals can be ugly-cute (think warthogs)… but there is NOTHING cute, at all, about any-sized mormon crickets. Disgusting creatures. Mormon crickets can't hop straight; they just flop, in all directions, sideways and upside down. When one dies, the others swarm and eat it. They can make highways dangerously slick when they get run over (then the others swarm to eat the dead ones, and get run over, etc). There are never just a few mormon crickets, which one could cope with, but swarms. They get big and bulbous and they are uncoordinated and ugly and creepy and gross. Even horses think so - just ask Hillbillie Willie!

Willie's spook is more of a duck-jump, and when he saw the ground begin moving beneath him with these strange crawlie-jumpy things, he began duck-jumping back and forth and back and forth, because he didn't know which way to spook! He lowered his head and shook it in aggravation, and the durn crickets bopped him in the nose when they flopped upward, and he really disliked that!

I urged him to keep up his trot - I mean, he for sure wouldn't want to walk through those things, and *I* was for sure not getting off to walk, and I was for sure not going to fall off - can you imagine the horror! Most scary were the bushes with clumps of flopping crawling crickets beneath them, making the leaves shudder and shake.

We rode through at least a mile and a half of these creatures, and every single one was a baby - not an adult in sight anywhere. Where do they suddenly come from anyway - spontaneous combustion??

They reminded me of the White Walkers, the walking dead in Game of Thrones - they just kept coming on and on, swarms of them. I've heard of the crickets dying and making bridges of the dead bodies to keep moving onward across a creek. (Like Game of Thrones Season 8 Episode 3, where the dead made a bridge to cross the burning barrier - creepy!)

While I gagged and bemoaned out loud this dreadful event, Willie bravely kept up his trotting through the incessant pool of mormon cricket babies. When we finally left their territory, Willie was still shaken up a while - trotting along and lowering and shaking his head as if to shake off the daytime nightmare!

above photos is Hillbillie Willie on another ride…. not pictured are the mormon crickets. If only I'd had a video camera!

Posted by The Equestrian Vagabond at 1:18 PM No comments: