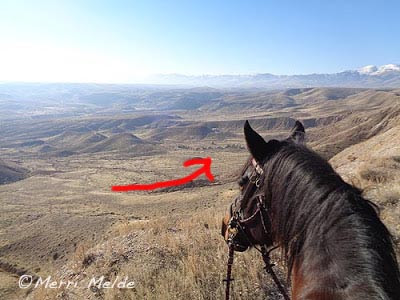 This is what endurance horses do between endurance rides

Riding the Rim Trail, we have a long, scenic view down into the Hart Creek drainage. Between the crumbly cliffs of the rim and the crick is a maze of hills and washes, what looks like an old travertine hot spring hill, and a hidden jumble of bentonite** sculptures, the leftovers from a long-ago eroded lake-bed sediment. I call the sculptures the Dragon's Backbone.

Carol and I hiked there once, from the top down. You've got to find the right ridge to climb down, or else you'll lose your footing and slide…. a very long hide-ripping, tumbling way down.

Finding the Dragon from the bottom up is a game of hide and seek, because one cliff face looks like another, as does one hill from another, and who knows which hidden box canyon the Dragon hides behind?

We managed to catch just a glimpse of a bentonite outcrop on our regular Hart Crick trail, so we angled off cross country, bush-whacking our way to the hidden treasures. Hillbillie Willie was all for this new exploring adventure with his pal August, going places where (possibly) no horse has gone before. 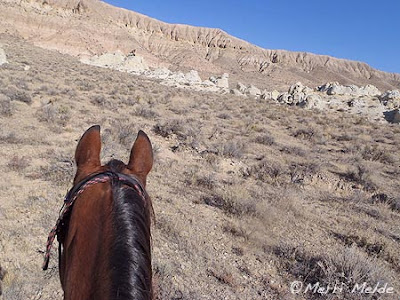 Around behind a hill, the white monster appeared, growing out of the ground as we picked our way toward it, and Willie's eyes bulged in disbelief and wonder. What magic is this!?

We found names carved on one of the white mushroom rocks, some dating back to November of 18… was that really November of 1918???? Or someone modern but totally confused about the date? There were settlers living on this crick a hundred years and more ago; we ride regularly by one of the homesteads built into a hillside. 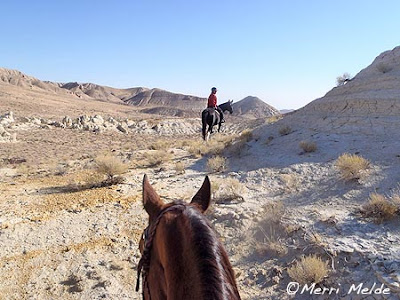 We ended up discovering deer trails leading us in a winding path (with some steep climbs!) back up onto the rim.

Willie still loves being an explorer, and he was so fascinated by the secret Dragon's Backbone that he decided he wants to be a geologist in his next life.

*Old Explorers is, by the way, a fabulous older movie, if you can get your hands on it

**Bentonite? I don't know for sure, I'm not a geologist. But Hillbillie Willie will be able to tell you for sure in his next life. 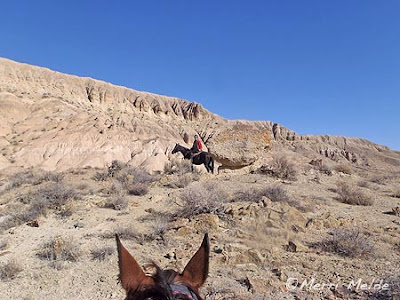 Posted by The Equestrian Vagabond at 3:01 PM No comments: 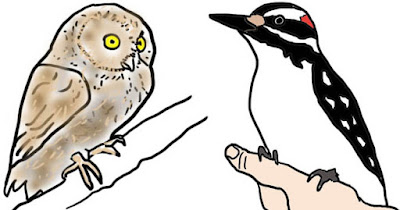 Oh, $hit - I'm outside in the dark, holding a rescued squealing woodpecker in my hands, with 3 ninja kitties climbing up my legs and two screech owls waiting in a tree - NOW what am I supposed to do!?

Dark outside, and I hear some high pitched squealing of an animal in distress. I leap out the door, afraid it's one of the ninja kittens in trouble, but no, it's not a cat. Rabbit? Bird? Has to be a bird. I grab a headlamp and track down the high-pitched squealing.

Or rather track it up - there it is - a screech owl has some kind of bird in its claw up in a cottonwood tree.

And that's when I should have turned and walked away.

But I can't walk away. I have the screech owl in my headlamp, and I watch him. The prey-bird squeals very loudly and flaps, but it's pinned in the grip of the owl's talons… while below around my feet the 3 ninja kittens swarm around frantically, looking up, trying to track down the noise which is obviously an animal worthy of cat claws and jaws.

And the screech owl flies away with his prize... but the flapping bird flaps loose and flutters to the ground. The ninja kittens are on it instantly. I am on the kittens the next instantly. I grab the bird, which turns out to be a Downy woodpecker.

As I gently cradle the bird, it grips my fingers tightly. Any time I speak, Easy birdie, it squeaks, loudly. Oooh, shut up bird! (They can be very loud.) The kittens are trying to crawl up my legs. (Me: "Ouch! Stop it!") (Downy: Shriek!) (Ninja kitties: "Meow!") I look up in the trees, and 4 screech owl eyeballs are staring down at me silently, reflecting my headlamp.

Now what do I do??? I should have left it to Mother Nature. Not my business to interfere. Mother Nature already had this all figured out before I stuck my human two cents in. The woodpecker may die anyway, and the screech owls will be out a meal. What if the screech owls die because of this meal I cheated them out of? What if all 3 birds die because of my interference? If I put the woodpecker back in a tree near the owls, am I sacrificing the woodpecker? Is it my decision to kill the woodpecker? I can't set the bird down anywhere anyway, because the cats will get it. The kittens are great mousers, but I don't want to encourage them as being great birders, too.

I have finally stopped talking, and the woodpecker is silent, but even though I open my hand, it's gripping my fingers tightly. Its heartbeat is slowing down from its adrenaline rush, but it's strong. I'm able to look at it in my headlamp, and it doesn't look torn up at all. The owls are still watching. The kittens are still prowling around my feet. I'm holding the bird out in my open palm, where it sits calmly while I'm still trying to decide what to do.

The kittens are still trying to crawl up my legs. I lead them to the house, entice them inside, and shut the door on them… and decide to head to some different trees away from the screech owls, to try to put the woodpecker on a branch.

Not 10 seconds later the ninja kittens are following me, having found a window through which they escaped back outside. They don't know I still carry the bird since it's silent now, but they always follow me hopefully around anyway.

As I try to set the woodpecker on a thick tree branch, it's still gripping my fingers tightly… and when I try to gently turn my hand so it steps onto the tree branch, it squeals again. Shut up! I whisper, Hurry!, and as he fumbles and stumbles onto the branch, one of the ninjas is up in the tree immediately.

In my headlamp, the woodpecker squeals again… but it sees the cat and in desperation flaps away, and the last I see of it is wings flapping upward out of my headlamp, as Ninja Silvester shoots after it across the grass, but he pulls up empty-clawed.

The woodpecker's gone into the dark. It may live; it might not. Cats are empty-pawed, and the screech owls are empty-taloned.

And I'm left feeling discombobulated. I don't like playing Bird God because I don't know if I made the right decision and I should have left it alone.