Owyhee Cow Drama, Part XVIII (or wherever we are in the ongoing saga) 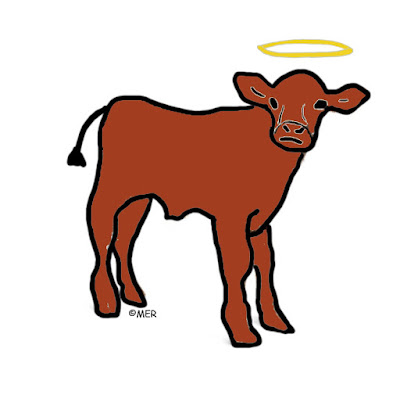 It's rogue cow season. You know the time of year - when cows escape off their BLM grazing allotments because the grass is greener on the other side (and the fences probably aren't maintained in the best condition).

In the private pasture next to us, owned by B, 5 black cows and 1 brand new black baby had been hanging out for a week or so. The law is Fence 'Em Out here in Idaho, but these cows were 2 fences over from where they were supposed to be. The rancher had been called, but nobody was in a hurry to come get them. The cows were sure in no hurry to leave, because they had yummy native grasses to eat in a small protected oasis, and a convenient running crick in the drainage instead of having to walk miles for water.

So one afternoon, I heard a calf bawling, off in another direction, away from the pasture of rogue cows. His bawling went on, and on, as if in distress, so I went out there and discovered a new red calf, maybe 2 days old, lying in the brush, in no-cow's land between the private pasture and the allotment pasture up the hill on the flats.

I could see the rogue black cows and baby up in the far end of B's pasture. I hiked up the trails toward the closed gate on top leading to the allotment, looked everywhere, saw no mama cow that might've had a baby, saw no cow tracks on the trail, saw no downed or broken fences; so no cow had came through that way. So I sat on the ridge up there a while and watched the black cows in B's pastures to see if anybody was going to come back for this bawling baby. They all happened to be wandering downstream, towards the bawling calf, and they all came down to drink, close enough to all hear the unhappy calf.

One mama cow turned and look toward the bellerin' calf, and then she turned and walked back upstream to where the rest of her herd was. They could all hear him, but nobody responded.

I kept thinking - where on earth did this calf come from? Did one of the black cows make her way out of B's pasture to have this red calf and then just abandon him? Did another rancher's cow from down-crick escape her pasture, come all the way up here, birth him at that spot, and then wander off to either sneak back home or die (I have never found a dead cow anywhere nearby). Did a cow have him up on the allotment, and he slipped through the fence and made his way downhill to that spot? Was he just a product of spontaneous combustion? Any explanation seemed just as plausible as the other. Perhaps he was related to the mysterious Baby Jesus Calf from a couple springs ago.

Hours later, the calf was still out there bellerin', and then I saw him stand up and start walking toward the mountains. Maybe he knew his mama was over that way, or else why would he head that direction, though I had seen no sign of her at all, dead or alive.

At dusk I was going to hike up that way and see if I could see where he went and if he'd re-united with his mama, but as I walked into our back yard - THERE'S THE CALF IN OUR BACK YARD.

I could not have been more surprised if i'd come face to face with a cougar sitting in the back yard looking at me! The calf just stood there and stared at me. I just stood, flabbergasted, and stared at the calf. Instead of walking all the way west to the mountains, he had, somewhere along the way, made almost a 180-degree turn, walked almost a mile back this way, crossed through 2 fences, wandered past our scary bone-yard-junk-yard, and wound his way into our human-smelling back yard. The clear expression on his face was - and I am not anthropomorphizing - I need help.

And so what could I do, but help him.

I jumped in my car and drove down to the neighbor rancher who has a bunch of cows on his place. He was home, and I told him what was up, and he said he pretty much has all his cows contained at his place; and all those rogue cows in B's pasture belong to another rancher. He gave me that rancher's number and I called and left a message, about all his escaped cows and the abandoned calf in our backyard. (I never heard from them.) Then I called Regina next door, and she called Cowboy Paul from the Joyce Ranch (whose cows also run on this allotment, though they usually stay miles away from our place), and at 8:30 PM, dark, he said, "I'll be right over to get it."

He was true to his word. He arrived at 9 PM, and with flashlights, we saw the calf was still lying down in the back yard at the same spot. He was so weak (and scour-y) that Paul was able to just grab him, didn't have to rope it.

So Paul took it home to his milk cow.

I named it Wilbur.

**UPDATE MARCH 29**
I talked to Paul, who said calf is doing well with its adoptive milk cow mama!
yay!

Posted by The Equestrian Vagabond at 9:08 AM No comments:

Stuck at Home? Read one of my short e-Books - Free! 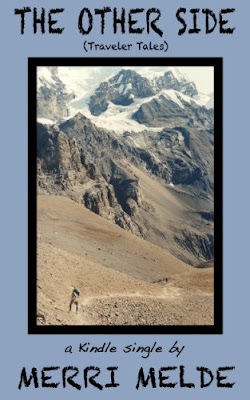 Since the country is on restrictions right now because of the Coronavirus, reading is something we can still enjoy while keeping our social distances. How many re-runs can you watch on TV, anyway?

International travel is out of the question right now, so armchair travel is our only option. If you are craving adventure, here's an alternative. 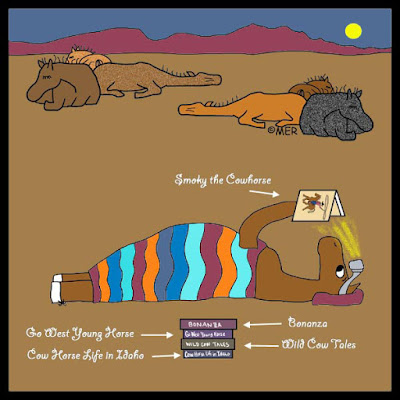 In honor of the older-than-dirt tradition of reading for entertainment, and to give back just a little spark of joy to people for a brief time, my short Kindle single, The Other Side, will be free on Monday, Tuesday, and Wednesday of next week, March 23-24-25. It's the adventure story of my trek in Nepal's Himalaya on the Annapurna Circuit, conquering Thorung La pass at 17,872 feet. It was a doozy, and the scenery just stunning. I chose this one because it's one of my best-ever adventures and one of my favorite ones that I wrote. This story is horse-free, but intrepid nonetheless.

Brew yourself a cup of coffee, grab a free copy of this ebook, and sit back and get ready to be amazed by the Himalaya and to be out of breath for a while.
(If you don't have a kindle, you can read it with Amazon's free app - click on "Read with our Free App" below the kindle price box.)

Enjoy the escapade, and stay healthy! 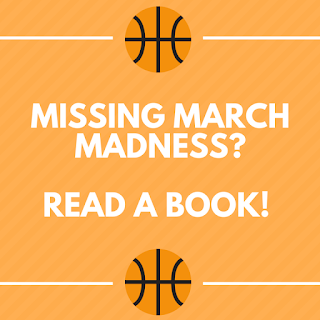 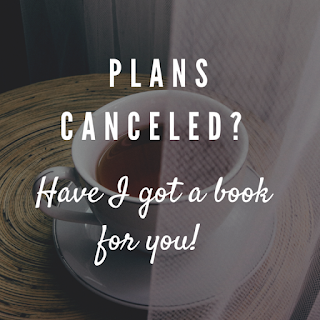 Posted by The Equestrian Vagabond at 7:48 AM No comments: