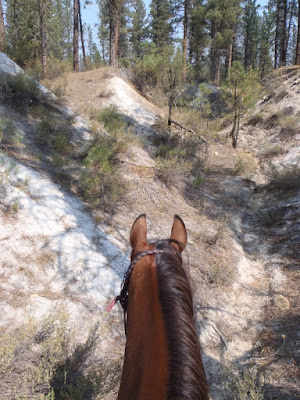 Hillbillie Willie the Standardbred did it again - finished a 50 mile endurance ride at last Sunday's Old Selam in the forested mountains of Centerville, Idaho. After a brilliant debut at City of Rocks in June in his first 50, followed by his second attempt at a 50: a great bubble bust (mine) in a first-loop pull on the first day at the pretty Top O' The World ride from a too-rocky road = sore feet, Old Selam was for Willie a piece of cake.

Yes, it was hot, and yes, I could feel him getting tired a few times Sunday on the second loop during the heat of the day (probably around 100*), when we were all 6 of us - horses and humans - sagging from the heat, and thirsty for need of water, but that big skinny Standardbred finished the ride with a pulse of 48. 48!!!!

Willie LOVED the mountain trails, particularly the overgrown two-track roads with blind corners that he zoomed around, ducking under trees that whapped me in the face (he's too tall and his neck is too long and too far down for me to throw myself down on his neck). I just hoped that we would not discover a moose or bear around one of those corners! 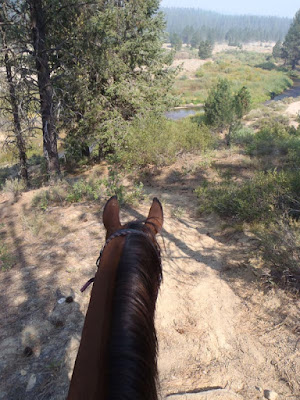 Oh, he's a charmer, that Willie. He had Dr Ruble enchanted, as Willie tried to help him fill out his vet card before and after the ride. He blinked his eyes charmingly at everybody in camp who said he was a big horse or a sweet horse. He pretty much has everybody charmed. He's a looker anyway, since he's (I swear) 17 hands, but it's his cute, inquisitive, kind expression that really gets everybody.

He's got a sense of humor, too. Within 10 minutes on the high tie at the horse trailer, he'd reached down and dumped out his water tub. I promptly filled his tub again, hauling buckets of water from the trough to the trailer, (in the heat of the day), and within 3 minutes, he'd dumped it again. Being funny, I guess, but it wasn't funny to me.

"Go ahead, dump your water," I scolded, and poked him in the nose with the bucket, "get hot and dehydrated the night before your hot 50 mile ride!" He looked aggrieved, (obviously not realizing the consequences of going thirsty) and apologetic. He didn't dump it again.

Instead, in the next 10 minutes, he'd pooped in it, exactly on target. I am sure he was giggling as I cleaned out the tub and filled it yet again. He didn't get scolded for that one because it was indeed rather hilarious. 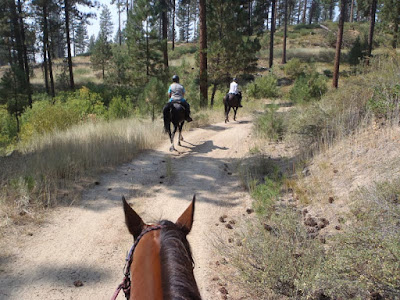 I think you can say that Steph's Standardbred Willie's an endurance horse now. He's only 5, but has years of conditioning foundation under his girth as a racehorse (he raced at 2, I think), and he's put in his time in the hills and sand of Owyhee. He might get to go in another endurance ride or two this year… stay tuned!

More photos and stories from Old Selam at:
www.endurance.net/international/USA/2017OldSelam

And my photo shoot photos from Day 1 are at:
www.theequestrianvagabond.com/Clients-Endurance/2017-Old-Selam
(watch out for the wild animals!)

Posted by The Equestrian Vagabond at 6:42 AM 6 comments: