Prettiest Boy on the Trail 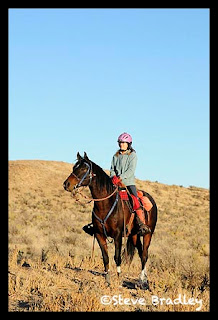 I'm not making this up. It's true, because photographer Steve Bradley said this, and repeated it, after snapping these shots of Dudley on Day 3's 50-miler of the Owyhee Canyonlands. 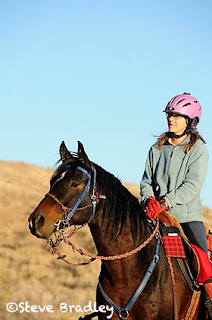 We were following Smokey and Jose out on trail and approaching Steve with his camera. Looking into the sun, and seeing something at this spot that she'd never seen before, Smokey couldn't figure out what Steve and his motorcycle were. She froze, so Jose stopped, and Dudley stopped. While Smokey was frozen trying to figure it out, Dudley used the opportunity to gaze with the Look of Eagles at some horses going down the trail in the distance. He wasn't posing on purpose; it just comes naturally. 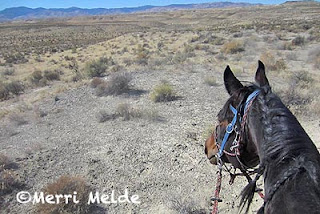 Such a handsome boy!

Dudley finished the ride, with The Raven, of course. It was his sixth 50-mile completion this year. Go Dude! 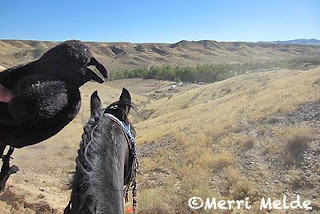 And now that he's even slimmer than ever, no matter what veterinarians or equine body scores say, he's just the prettiest boy on the trail! 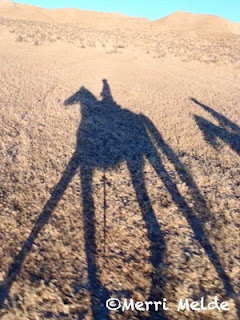 Posted by The Equestrian Vagabond at 3:36 PM 4 comments: 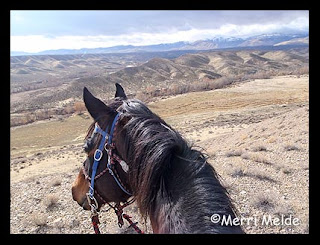 Mankind has named roads and trails since the beginning of time, to indicate where you're coming from and where you're going to, and to give you a kind of invested ownership in a place. Same thing here in Owyhee with the trails we ride. For example:

Tevis Trail
You've all heard of the 100-mile Tevis trail in California, and you've no doubt heard about the steep cliffs and canyons you ride above, and places such as the self-explanatory "Pucker Point" where you don't want your horse to make a mistake and step off the trail. Our Tevis Trail is about 15 yards long, and it's not near as steep or deep as anything on the real Tevis trail, (it's more like a 50 foot slide than a 500 foot drop), but you'd just as soon not slip off there. It's so short, that by the time you start to pucker, you've already traversed it. It's the tame Owyhee version of the Tevis trail. That this very short trail even got a name is because it's one of our main access trails out southeast toward the BLM hinterlands.

Toilet Paper Hill
Obviously, this hill is so-named because someone had to get off to wee, and they dropped their toilet paper. (Yes, they picked it up the next time they rode it.)

Tamara's Hill
"Wow, what did I do to get a hill named after me?" Tamara asked. Well, it's because that hill needed a name, and it was the first trail that Tamara rode when she came out to visit Connie.

Badlands
If you've ever been to Badlands National Park in South Dakota, you've got an idea of what our Owyhee Badlands trail looks like - only on a much tinier and more modest scale. Lots of water-eroded rivulets coming off these mud-clay hills and tiny hoodoo sculptures. Squint, and use your imagination to make it as big and bad as Badlands National Park.

Blonde Cow Wash
This is a great training sand wash, about 1 1/2 miles long on the upper end. It's so named because we saw - what else - a blonde cow in it once.

Bilbo Baggins Trail/Frodo Baggins Wash
Great names, yes? Bilbo came about, because back then around the time of the Lord of the Rings movies, I was riding a short, compact little horse named Billy, who just reminded me of a little hobbit. That's the thought that popped into my head, as I was riding Billy along this trail. Naturally, this trail with Billy became the Bilbo Baggins Trail.

There's another nice training wash that branches off Bilbo, which makes a nice loop - so naturally, this became the Frodo Baggins wash.

Antelope Loop
Connie came upon, you guessed it, a little herd of antelope in this nice short little wash/trail. 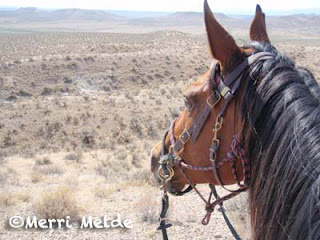 
Three Cheese Casserole
Up the Training Wash, down Spring Ranch Road wash, up Blonde Cow wash. If you do all Three Cheeses, it's a strenuous workout. You can also do Two Cheeses, or Two And A Half Cheeses, to make the workout a little easier.

Merri's Trail
I found this short-cut trail to our regular Hart Creek loop, after a new fence cut off our regular access. I actually have cows to thank for making the trail; I just followed the right one that connected. Of course there's also a Steph's Trail, a nice 1 1/2-mile flat trail up on a ridge that is her regular favorite; and a John's Trail, where he discovered a nice back detour around a homestead that keeps us off private property.

Krusty's Trail
Steph's wonderful old Orlov Trotter, in cahoots with my horse Stormy, found, marked, and stomped down this trail down our canyon as an alternate to the regular road.

Bones Trail
This nice shortcut from the BeeHives to the Highway crossing is marked by cow carcass bones.

Around the Block
If you wanted to close your eyes and imagine you were in a big city (although pray tell, why would you do that!), you could walk a big city block around skyscrapers. This 16-mile loop goes up Spring Ranch road to the Owyhee mountains, along the base of them, and back down Bates Creek Road - like going around a biiiiiiig city block.

Hallelujah Trail
Regina discovered this awesome trail for one of her spring rides in the general area of the Snake River. It's a 2-track jeep road along a Badlands rim. That first time we rode it, the skies were blue, flowers were popping out of the desert, and the view to the Owyhee mountains 15 miles away was just awesome. Hallelujah!

AK-47 Trail
Carol and I were sent out to ride and mark this cut-off trail out of Lost Juniper Wash to the BeeHives. As we set off on this trail, some hoodlums were off in the not-too-distance firing off AK-47's, kalashnikovs, M16's, cannons, whateverthehell was in their arsenal. Neither August nor Dudley wanted any part of that! We turned around and rode home, just in case they had high powered scopes and too much beer and thought we looked like moose in the desert.

Dead Cow Baby Loop
This is an 18-mile loop: Bilbo/Antelope Loop/Lost Juniper/AK-47/Beehives/Spring Ranch Road/Blonde Cow/Pickett Creek Canyon. Along Spring Ranch road this spring, as we were doing this hodgepodge loop of trail sections, in a span of riding it 2 days in a row, we came across 3 dead baby cows. Well - what else are you going to call this epic trail? We really did try calling it other names, but Dead Cow Baby Loop defined it best and stuck. 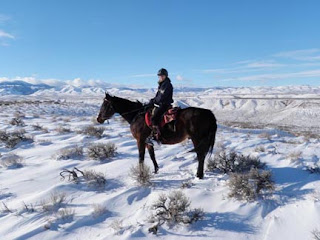 Posted by The Equestrian Vagabond at 9:46 PM 5 comments: