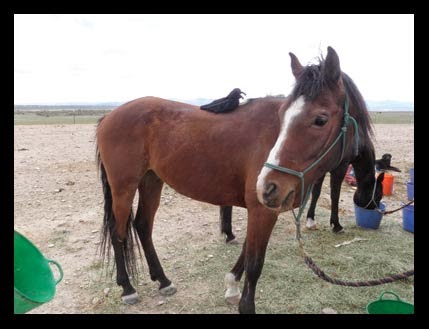 I got on Quinn, my Tevis horse, (owned by Nance Worman - she offered him to me 5 days before Tevis), for the first time the Friday afternoon before Tevis for 20 minutes and called it good, and I got on him Saturday and rode him 100 miles. He was an easy ride. 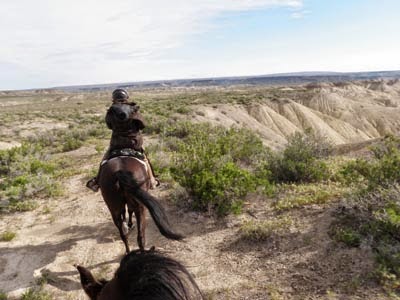 He used to be a racehorse. He still thinks he's a racehorse. He likes to be in front. We rode with Connie on her other horse Finneas. He's THE GRANDSON OF THE BLACK STALLION, in case any of you have never heard this. And he knows it! And he thinks he has to win every ride (including cattle drives). He insists on being in front.

The start was rather, um, exciting, with 2 hot horses wanting to be in front. We found a little pocket at the start, a little space behind horses in front of us, but that didn't matter at the start of this HORSE RACE!!! (so thought Finneas and Saruq). A whole lotta shenanigans were going on beneath us, and I discovered the gloves I was wearing were not particularly good for gripping reins, something which was very important at that stage in the ride. I thought at one time I might lose Saruq there when he threw his head straight up in air and tried to leap to a gallop… but I managed to keep a hold of him.

The rest of the ride, 49.8 miles of it, took a lot of riding. A Lot Of Riding. Saruq knows how to pull. The harder you pull on him, the harder he'll pull and the faster he likes to go. He can bend his neck like a pretzel and still pull a freight train at 35 mph. When you're on a horse that pulls, you want to do the opposite: don't pull - because he'll just pull harder and go faster. That means really using your legs and weight, a lot, and trying to keep your hands light on the reins. Less pulling but more communicating with the reins, but still taking a good grip on them. Not pulling them, but working them a lot. I couldn't use my grip-less gloves, so the reins did a number on my fingers throughout the day. 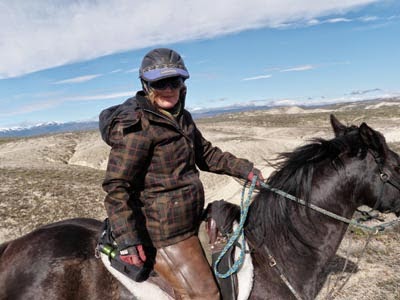 Connie says, Look ma, one hand! And note Finneas' ears are going back because Saruq is daring to come up beside him
I'd carried the point n' shoot camera along to take pictures during the ride, like I always do, but it wasn't until 15 miles into the ride, when we were heading up the Hallulujah Rim Trail, that I even thought about taking pictures. I hadn't been able to take both my hands off the steering wheel the whole way. Connie wasn't any help as a photographer either - she had to keep both hands on Finneas' reins. We did snap a few photos as the horses were (momentarily) standing still at the lip of the Hallulujah Trail, just before we got off to walk them down the steep hill back onto the flats. I gave the camera to Steph for loop 2, since she was doing a 1-Hand Ride on Jose. 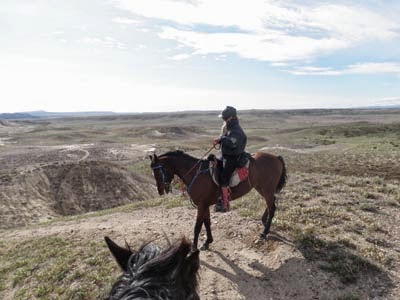 Me on Saruq - notice he is snarling. That's his racetrack snarl. Curls his lip, wrinkles his nose, and bares his teeth.
One good thing about our horses is that they aren't affected by wind, like some spooky Arabs. Which was a good thing, since we were riding in a hurricane.

I've always wanted to ride inside a Dust Devil and we did just that! One came at us, fast, (like 35 miles an hour, the speed the wind was gusting), while we were trotting along the trail into the wind, a wall of howling whirling brown dust (think: Hidalgo), and Saruq puffed up a bit but didn't know what else to do so he just kept trotting! The Dust Devil slammed into us head-on, then batted us to one side, then flung us to the other, then whapped us from behind as it went on, and we came out trotting the other side, having not missed a beat. I closed my eyes as the Devil passed, and I'm sure Saruq did too!

Our horses were monsters all day, making us work to keep them from going too fast. I think I used every muscle in my body, including my hair follicle muscles, because I feel every one of them today. I'm whooped, muscles are sore, face and eyeballs are windburned, fingers are thrashed, dry-crack cuts in my hands everywhere - I love being an endurance rider! 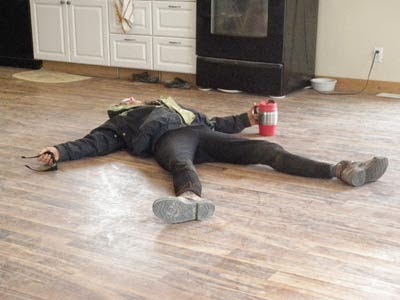 More photos of the ride (including ones of the second loop, taken by Steph on her pleasant, calm, one-hand ride on Jose) are here.
http://www.endurance.net/international/USA/2014ToughSucker/

Top photo: The Raven had a great ride on Saruq!

Posted by The Equestrian Vagabond at 6:43 PM 6 comments: 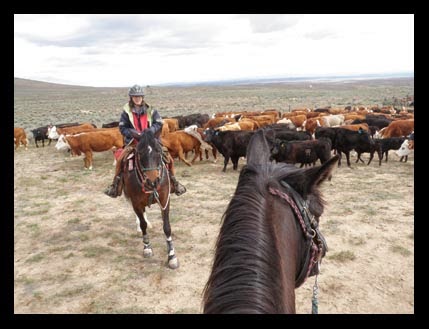 Since we've been getting a lot of practice this spring mooooving cows off our upper acres, when the local Owyhee ranchers needed help gathering and driving their cows, we Rent-A-Cowgirls volunteered.

Connie sat astride her Grandson of the Black Stallion Finneas, and I rode tall (and wide) on The Dude. We joined 15-20 Real Cowboys and Cowgirls, riding out into the sagebrush and splitting up to gather a hundred or so head of cattle, pushing them together and driving them up to an awaiting corral for some branding and sorting before turning them loose in the next higher pasture. 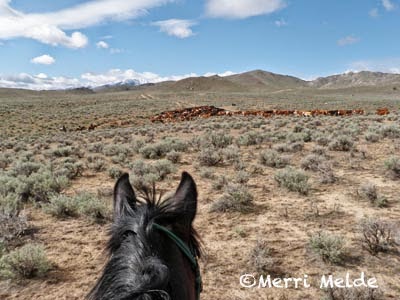 Finneas spent much of the morning ignoring the cows but, more importantly, trying to win the ride, sweating and fretting and covering a lot of extra ground. The Dude spent his morning getting more fretful, as the cattle spread out in a half-mile mooing bawling long line, and as the calves shot back escaping behind the line and the cowboys took off at a gallop to retrieve them, and as Finneas occasionally disappeared over a hill out of sight to go let off some steam. 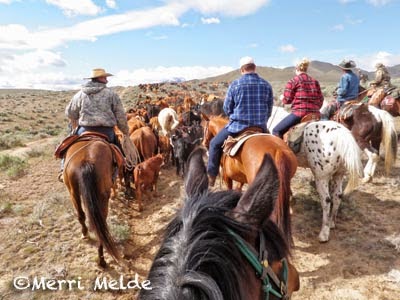 Once the cows bunched up at a fence corner and gate, and Dudley got to squeeze together with a line of cowhorses and move in close on the cows, that's when he found his comfort zone, being big and bold and bossy, throwing the Stink Eye at the cows and charging at them to get them moving onward. The bellowing cows and hollering cowboys and cowgirls and barking cow-leg-biting cowdogs didn't bother The Dude a bit, and he threw his own snorts in for good measure to scare them. 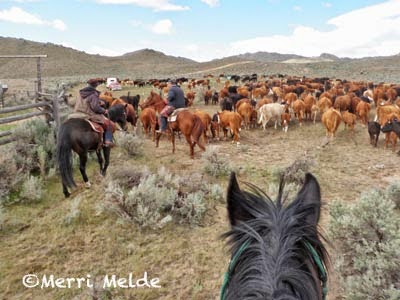 Once the herd was corralled, the ranch owners lit the fire and heated up the branding irons, the Real Cowboys and Cowgirls roped and branded the "slick" calves; 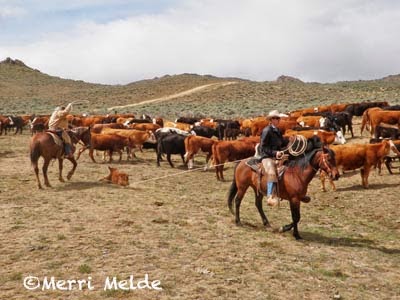 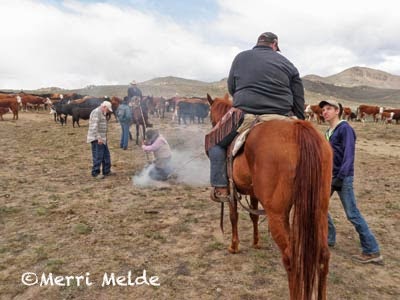 and after a cowboy lunch the fun began: sorting a dozen dry cows from the herd. 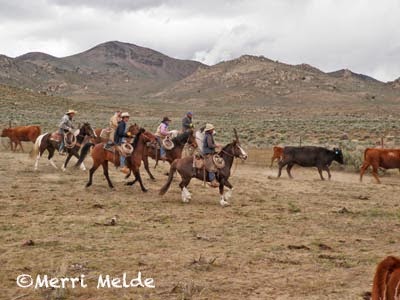 Wisely, Connie and I did not join the sorting. That was where the real cowboying came in, where you see those rodeo competition events really put into practice. It was fast and furious - it took a strong and imperturbable horse and rider to cut a mad cow out of a swirling bawling herd, and a coordinated effort from several other riders to keep that cow moving to the other end of the corral. "You can't outrun a cow," one of the cowboys said - but that didn't stop them from trying. The skill of the cutting horse facing a dancing cow was apparent. One particularly cantankerous cow took 8 cowboys and cowhorses, driving her, literally leaning on her and shoving her along, doubling back to chase her down when she slipped back through holes in the line, a neck rope to pull and a butt rope to shove - and 10 minutes to finally get her across the corral into an adjoining pen.

Those riders and horses knew what they were doing. It was clear from the beginning that we Rent-A-Cowgirls and  our Quasi-Cowhorses would have been way out of our league, in the way, getting dumped or run over. We were happy to watch from the sidelines in awe.

So if you're an Owyhee rancher that needs an extra Cowgirl or two for the day, we're rent-able. We probably won't disgrace ourselves (i.e. we probably won't fall off or get lost), and we might help moooove some cows, and we know when to stay out of the way and admire the professionals doing their thing.

Here are a couple of short videos from the day:
Gathering cows

Waiting on cows to filter into the corral

[the white face, white-legged horse is a mustang, an awesome cowhorse]
[link: https://www.youtube.com/watch?v=FRdTqBp3YxI&feature=youtu.be]

Posted by The Equestrian Vagabond at 10:08 AM 4 comments: 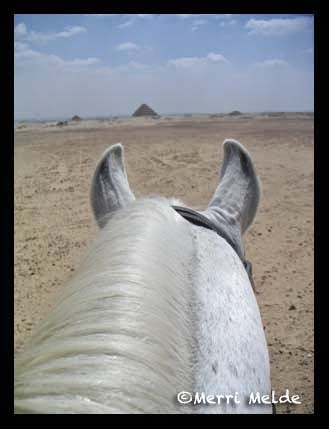 I couldn't wait for our ride among the Pyramids in Egypt… until I learned I'd be riding Borcan: