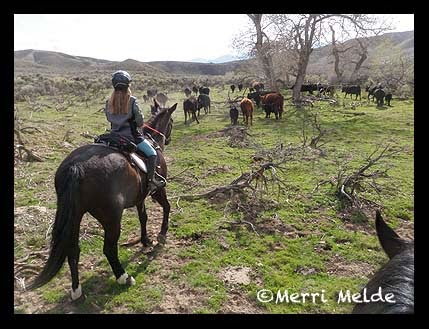 We got this cow-moving thing down. (Maybe not the fence-fixin' so much, but definitely the cow-moving.)

A rancher's cows have taken up residence on our upper 200 acres (and Connie's 40 acres) this spring - and why wouldn't they? Abundant grass and water, a 'nursery' to have their babies and raise them in safety, while the BLM land they're supposed to be on is scanty with feed, and the water is a long way away.

We've fixed some fence (over and over - the barbed wire is very old and not cow-sharp, and therefore not much of a deterrent), but once a week or so, after the cows either hop the fence or bust through it (calves just slither right through), Connie saddles up Tiger, and I saddle up Dudley again (sometimes Steph joins us on the ATV), and we moooooove the cows back on up the 200 and out the gate back onto BLM land. Last time there was a bull in with them, and he obediently mooooooooved out with his harem. 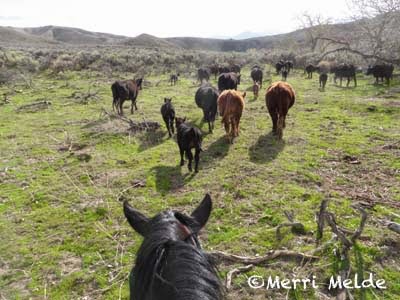 We'd gotten good at it. I don't know if Dudley's done this before, or if he's instinctively just a smart cow horse (he's smart at everything else). Tiger's getting brave and smart on cows too, with all the mooing and hollering and "HYAH!"ing; and even the cows have been getting smart. Last time they obediently mooooved along steadily in single file, up the crick much of the way before they let us turn them up the hill, and moooooove them on out the gate. 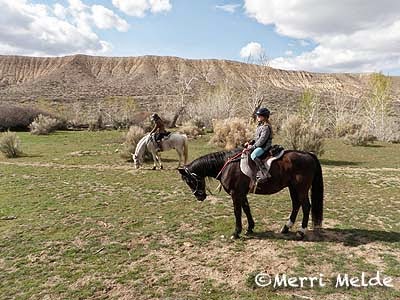 Today was that time of the week again. We saddled up Dudley and Tiger again, and today Sarah and Krusty joined us to mooooooove 30-40 cows out again. It was Sarah's first cattle drive.

The cows and calves were harder to drive this time, as if they'd get bogged down in quicksand along the way. They'd mush up into a pile like a freeway traffic jam, then they'd split up and down and left and right, scatter back down in the crick, break away back up in the tall sagebrush. 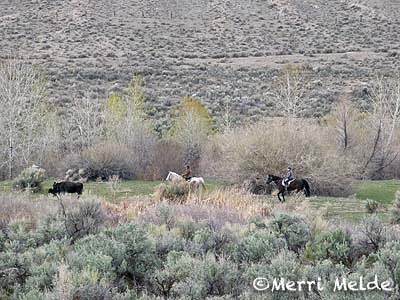 Long about the time we finally got them pushed up 195 acres and turned toward the gate, we saw the problem. The bull did not want his harem to leave paradise this time.

We 3 cowgirls and cowhorses pushed the cows and calves on one side, while on the other side the bull was busy running the line pushing them back toward us. The cows didn't know who to be more worried about - 3 brave and strong cow horses and 3 hollerin' bawlin' cowgirls, or one big bull that was getting madder and madder at them.

We cowgirls perceived we were no match for a mad bull, and we sure didn't want to get him mad at us, too. And since we're some pretty smart cowgirls, we admitted when we were whooped.

So we gave up. The bull and cows stayed on the upper 200. We rode home. 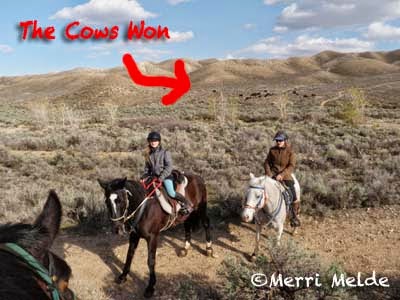 The cows won this round. Might be time to quit pretending and call the Real Cowboys and Real Cowhorses and Real Cowdogs in on the job.

Posted by The Equestrian Vagabond at 8:40 PM