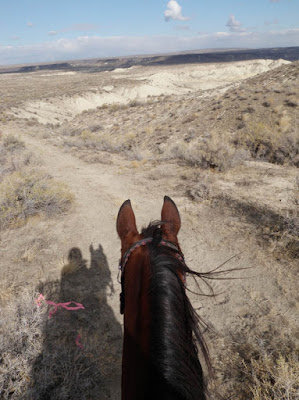 Saturday, October 26, would be Hillbillie's last ride of the endurance season, 50 miles at the Owyhee Hallowed Weenies. For the last week, the weather forecast had been fabulous, still and cool. Two days before, weathermen predict godawful winds, to start Friday night. I was sure hoping they'd just made a miscalculation, or a Halloween prank.

The winds woke me in the middle of the night. I looked at my clock: 3:41 AM. That's it, I'm not riding, I thought. I don't have to ride. Staying in bed. Problem solved.

I didn't sleep, for the wind, for the next 3 1/2 hours, when my alarm went off. When I poked my head outside, the gales weren't as terrible - down here in the canyon anyway. I knew they'd still be bad up on top, but, if you don't have to saddle up and start in the wind (or rain), then it's not so bad when you actually ride into the weather.

So of course I saddled up Hillbillie Willie, and we followed Connie and That Guy (trick riders for the Halloween costume contest) aboard DWA Saruq for a 50 mile jaunt in a hurricane across the Owyhee desert. 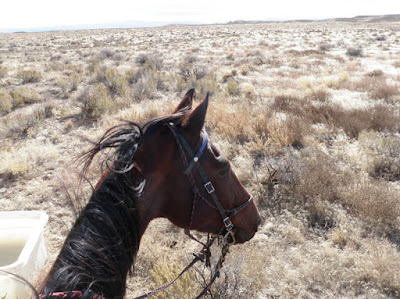 And lordy, was it a hurricane. It was Stink Windy. It was Cussin' Windy (yes, I said a few choice words at times.) It was so windy, that it wasn't even dusty, because any dust kicked up by a horse's hoof was already in the next county before the next hoof fell. It was so windy, Connie may or may not have tried talking/yelling something at me, but all I could hear was the wind roaring in my ears through my bandana. It was so windy, that much of the time I felt completely disconnected from Willie, who, bless his Standardbred heart, just kept trucking along like it was nothing. He was a superstar! Although he did uncharacteristically bolt 3 times throughout the day - from the odd, loud flapping of my heavy jacket, even though it was zipped up and snug on me. Neither of us had ever heard that sound before!

Likely there was a high vehicle wind warning for the day, because up on top of 17-hand Hillbillie Willie, yea, I felt it! Especially up on the Hallelujah rim trail, it knocked me about, and had me leaning into the wind at times so I couldn't get blown off Willie and over the edge of the rim. At times we got a welcomed treat of a wind-blocked wash, where it was practically balmy for a few minutes (and hot), and then we'd creep back out into the chilly gale-force winds.

Our vet check was back in camp, down in our canyon-hole, where it was just breezy and almost pleasant. Loop two was a reverse of loop one - different scenery but the same wind. Oh, there was some more cussin' from us humans, but our horses motored along like it was no big deal.

Hillbillie Willie finished up fabulous and strong and sound, making a clean 5 starts in 5 finishes this year, 255 miles. That included his first 3-day ride at City of Rocks where he couldn't have impressed me more!

Now it's time for a winter of getting lazy and fat… though I'm still waiting for the day Willie carries any extra poundage! 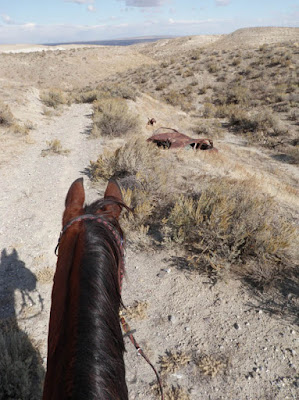 For more stories and photos on the ride, see:
http://www.endurance.net/international/USA/2019OwyheeHallowedWeenies/