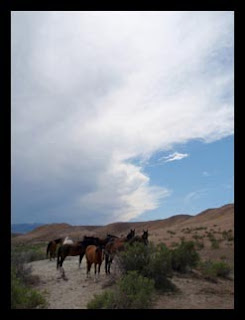 The dawn is clear. The sky an empty blue slate.

But the thought of a thunderstorm begins with a whisp of cloud over the Owyhees. It swiftly escalates in potency, building brawn, gathering momentum. 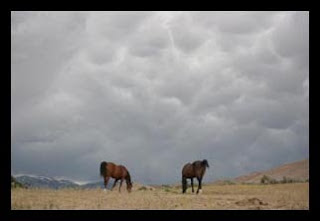 As we saddle up, it signals its intentions with murmurs of thunder.

We move out on the trail and the sky behind us darkens and grows... and the storm tracks us. Thunder rumbles loudly enough that even I can hear it clearly. Behind us sheets of rain begin to fall and leading sentries of lightning strike along the advancing edge of the wall of clouds, as the once-clear sky is consumed.

We cut our loop short as the storm is getting serious. Thunder cracks. Sheets of lightning illuminate the fierce clouds ahead of the surging wall. We stick to the washes down low as long as we can, but soon we must climb back up onto a ridge - and head back, toward the storm.

Lightning bolts hurl to the ground on the next ridge, as we pick up a canter, so exposed up on the flats, moving with urgency into the storm, toward home. 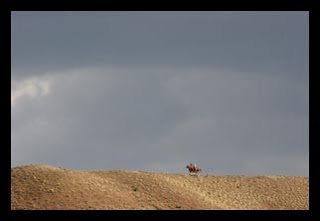 It is frightening... but it is mesmerizing and thrilling and beautiful.

We get to the barn and jump off and unsaddle just as a hail storm sweeps over us, small white stones kicking up dust so that it looks like a fog floating above the ground. For ten minutes we shelter under the tackroom roof and the horse herd turns their butts to the consuming storm, their heads to the ground, as hail and rain pounds down.

The intensity of the hail lets up; the thunder fades; the storm moves onward, carrying its force with it, leaving in its wake fading clouds, and shimmering sunlight. 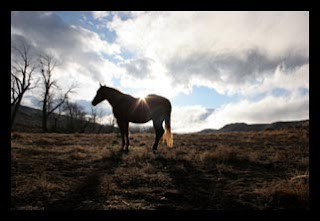 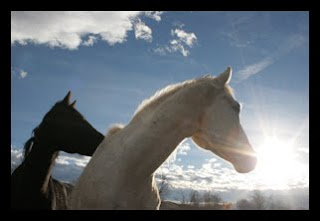 Posted by The Equestrian Vagabond at 10:24 PM