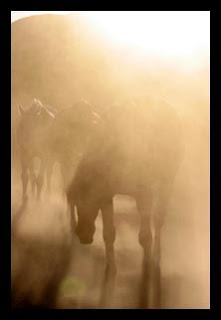 Dusk comes to Owyhee, and the great horned owls are out, crying, (not hooting), restless, agitated, silhouetted against the sky, flying up and down the creek. That as-yet-unidentified owl (great horned? long-eared? I think it's a screech) is making its odd high-pitched yell nearby.

The horses are spooked down the pasture and they swirl in circles, kicking up dust, stopping to turn and face the creek, heads up, ears forward, alert; then they come running back to the house. 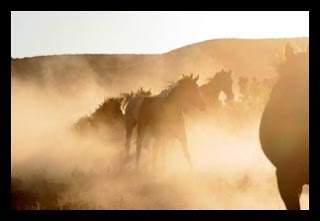 The neighbor's herd is sprinting through their pastures, clattering across the rocky creek. Something is setting them all off.

Night falls. The horses are staying close to the house, eating hay in the back pen... which is a bit odd. They are spooked again and bolt around the hay feeders, snorting, whirling around to stop and stare at the creek thirty yards away.

Then the yelling starts. One time, two times - I think it's the screech owl. The wailing gets louder and longer - it's definitely not an owl. A rabbit dying? The screaming is moving through the trees along the creek, 30 yards away. An owl got a rabbit and is flying with it? But the screaming gets louder. More chilling.

I grab a flashlight and sprint outside. I run to within 10 feet of the trees and brush along the creek and scan with my flashlight, but now the screaming has stopped.

But the movement in the brush/trees/creek has not.

Something is moving in there, on the ground. It's not an owl. It's something heavy. Possibly something dragging something. The victim is not a rabbit. The heavy thing is not a coyote.

I so wish I could see in the dark, like so many creatures, but I see nothing. Austin the dog has come out with me. He's not visibly scared, no raised hackles, and he's not barking... but he's not going forward into the trees like he normally would. He's got his nose up in the air sniffing.

My hackles are raised.

But I can't stop looking. I want to see.

I walk to our creek crossing 30 feet away so I can cross to the other side. Austin follows. I walk through the creek, swinging the flashlight somewhat nervously, trying to penetrate into the blackness, listening fiercely for anything - but it is now dynamically silent, and I know that something is in there.

I shine my light all around. The silence is electric. The atmosphere is charged. The hair on my arms and neck are standing straight up. My flashlight falls upon two eyes up the trail, looking my way. My heart stops a moment and adrenaline shoots through me even as I identify it as a deer. The female deer is seemingly wandering aimlessly - though maybe I'm anthropomorphizing and jumping to conclusions.

My heart is pounding from the adrenaline now, and if I hear a crack of a twig from the creek I will jump into orbit. The deer takes off into the brush. I look back at Austin, who looks back at me, You go right on ahead, if you like, I'll wait for you right here.

I contemplate moving up along the creek to peer down in it exactly where I heard the... heavy thing dragging something heavy, but a chill wave of goosebumps washes over me, and my feet are sort of stuck where they are. They don't want to move forward. I decide I don't quite have the nerve.

I go back inside, bursting with curiosity and the sad knowledge that we humans are so helplessly clueless about what goes on around us.

Half an hour later, the horses run around their pen again, and I hear snorting.

Perhaps a meal had just been finished and the predator was passing by.

I know something went on out there. It wasn't a coyote. Coyotes are a dime a dozen around here. I've seen one near the herd at times, and they ignore it. I've actually seen Finneas chase one. The horses don't act like that because of a coyote. That dying scream was from a fawn, and that Something Heavy that dragged it was not a coyote.

It was a cougar. 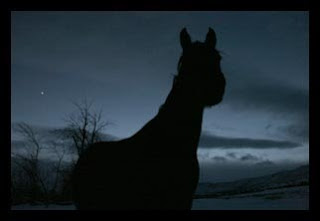 Posted by The Equestrian Vagabond at 9:31 PM