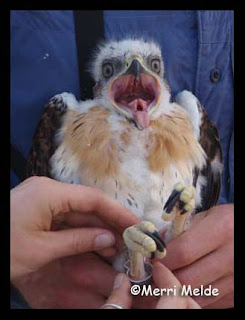 It was more ridiculous cuteness - a hawk banding day with the BLM on the Snake River Birds of Prey National Conservation Area, just like the screech owls in May.

In addition to nest boxes, now-retired BLM biologist John Doremus also put up nesting platforms on the grass prairies above the Snake River, which the ferruginous hawks favor. Here a baby is standing up on the nest as Jessica climbs the ladder. 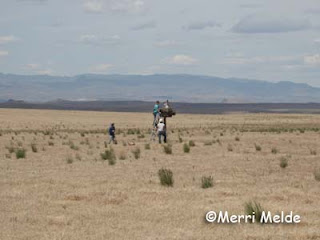 BSU students and raptor banders Jessica and Patrick had the honors of retrieving the babies from the platform nests and banding them while regaling us with Ferruginous Facts. 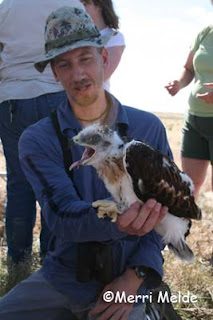 Here Jessica is removing babies from the nest. She uses one hand to distract their attention, then puts her other hand on the back of their neck, in effect pinning them down so they can't open their wings. Once she reached underneath to grab the feet, they didn't struggle. 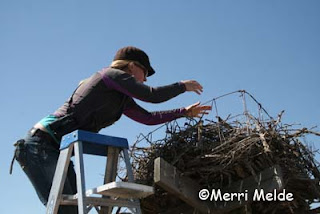 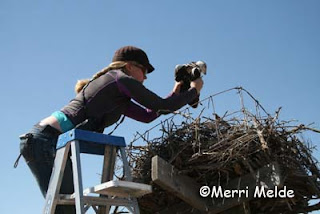 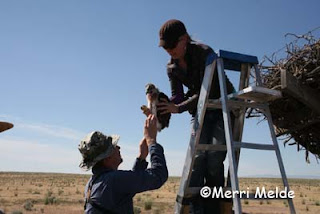 The female usually lays 2-4 eggs, sometimes up to 6. The first nest we visited had 5 young and the second nest had 2 young. Both adults incubate the eggs for 28-33 days, and then tend to the young; the young will fledge at 44-48 days.

Adults are white and rust colored - hence the name ferruginous, which derives from the Latin ferrugo, meaning rust. The legs are feathered down to the toes, but not underneath, which makes sense, so that the feathers don't get soiled.

They're a little larger than a red-tailed hawk; females are larger than males. You can see the difference here - female is on the right, male on the left (Patrick said this male is a little older than the female). 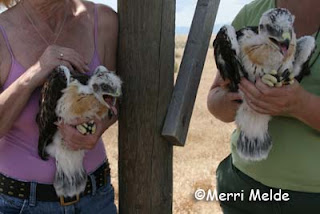 Main prey is the jackrabbit and ground squirrels, both of which are abundant in this area. The hawks also eat gophers, birds, reptiles, amphibians and insects. We found remains of ground squirrels in both nests.

The adults left the nest long before we got anywhere near it. The pair at the first nest were quite vocal and made some half-hearted dives at the first 3 people at the nest, though when the rest of us approached after the babies were down on the ground, the enraged pair flew high above screaming their contempt. At the second nest the adults were not so vocal nor aggressive.

These nestlings are panting because of the heat and stress, though once you get a hold of them out of the nest, they really relax and tend not to struggle, because they don't have those instincts yet - their instinct is to sit still and hunker down at this age. 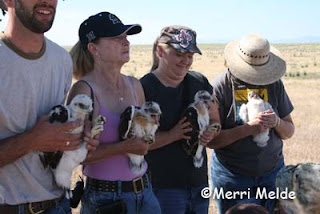 When we handled the birds we kept them shaded and handled them gently, just keeping hold of the feet. They aren't able to use their wings to flap or struggle yet, and they don't use their feet as weapons yet - and good thing, because look at the size of those claws and talons! 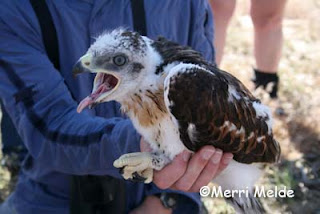 Here Patrick fits a silver band with a federal number on the baby's leg. All but one of the babies was banded, he was deemed a little too young (about 24 days), and his legs would probably grow a little larger. The other babies' (ranging from roughly 28-34 days) legs were already adult-size. 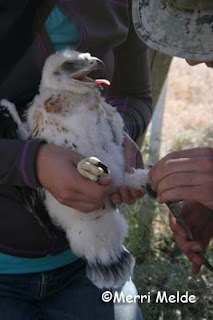 Notice this circular path in the cheat grass around this nest - it must be predators - coyotes? - circling the nest, eyeing the contents - it's a dog eat bird world out there, and chances of survival for the young are against them. With luck they will successfully fledge and learn to hunt and survive in the big world. 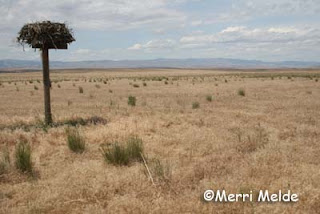 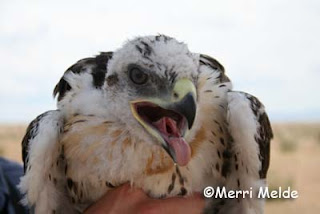 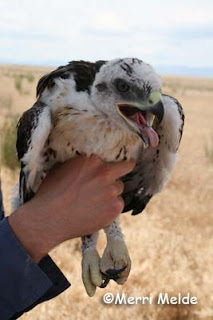 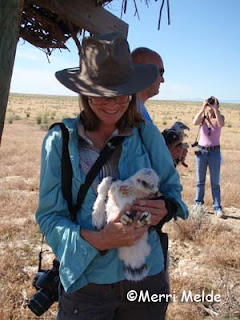 I tried to slip one in my pocket to take home but those darn banders know how to count.

Posted by The Equestrian Vagabond at 10:02 PM