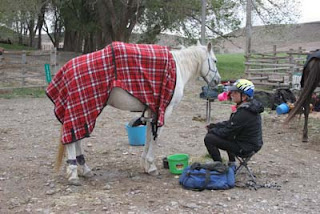 Nick and his beloved Don at a 100-mile vet check!

It didn't turn out quite as it was planned… but what ever does?

The "F" Team, the Tres Fabulosas, started as me, Connie, and Carol, riding Jose, Finneas and August in the 100 miler, ultimately ended with Connie and Finneas, Carol and August, and Nance and Jasbo successfully crossing the 100-mile finish line around 1 AM Monday morning.

But, as were all Fabulously Flexible Fabulosas, it all turned out good.

I ended up riding Jose on a 50 on Day 2. On Day 3, Steph started out as a Fabulosa with Connie and Carol; she entered Batman in the 80 miler (which started at the same time, 6 AM), and would decide after 80 miles if she wanted to elevate to the 100 miler and continue onward with Connie and Carol.

She decided Batman had done enough at 80 miles, so it was down to Dos Fabulosas Connie and Carol to finish the 100, until Nance and Jasbo joined the group leaving camp at 10 PM or so in the dark, following glowsticks that John had just put out by ATV. 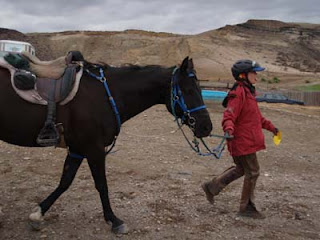 Connie and Finneas at a 100-mile vet check

13 of 17 riders completed the 100, including Kathleen Edman, riding a beautiful Rocky Mountain horse Pierce the Veil, who elevated from the 80 to the 100. At the Awards Monday morning, Connie, still in her pajamas, gave a speech (kinda like the Oscars) about the completion of her and Finneas' first 100-mile ride. She promises to write a story about it for this blog, which should be as hugely entertaining as her speech, for which Steph threatened to have her dragged off stage for its length.

That was it for another year of the Owyhee Fandango - rather poorly attended this year, but great fun for all involved.

Here's the video I took and made of Day 2 on Jose:

You can watch all 6 videos I made of the ride, including Sunday's Fabulosa 100-mile ride (camera worn by Steph on Batman! - it's a bit wobbly because of the helmet cam harness Steph wore… hence a lot of still shots in the video!) on the Owyhee Fandango ride page on Endurance.net:
http://www.endurance.net/international/USA/2012Fandango/

Posted by The Equestrian Vagabond at 5:24 PM