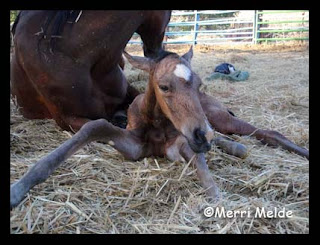 'Twas not a dark and stormy night, but a late afternoon for a mare weeks overdue.

In all my years around horses, I've never witnessed a foal being born. Carol called me this evening, "Mirage is having her baby now!"

Judy and I rushed over, and…. waited.

Finally, we could see the foal sack starting to emerge, but that stage seemed to take forever, too, with the mare getting up and down a more few times.

Eventually we could make out a hoof inside the sack, then another slightly behind the first (the correct presentation), but even that stage seemed to take forever, with the mare getting up and down a few more times again.

Then she laid down, and then came the final heaving, but not much more of the foal progressed into the world… and then the foal sack broke. Not good.

Carol was already there, had her hands on the one leg… but she could no longer find the other leg. The clock was ticking - if the foal didn't get out soon, he'd suffocate. Finally she found the leg and started pulling when the mare contracted… but the foal still wasn't moving, and now it was getting a little more urgent. Judy and I jumped in, each of us grabbing a foal leg, while Carol pulled the sack off the baby's nose, and when the mare pushed, we three humans pulled for all we were worth... and out slid the first 3/4 (the widest part) of the baby.

His tongue was hanging out of his mouth, and he looked… limp… well, dead...

and then he blinked an eye. 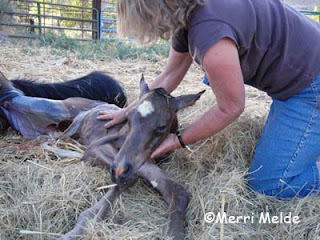 LJ Owyhee Quartzite was one Big-A** live foal. When I say he was big, I mean he was born with giraffe legs! I don't see how that thing fit in the mare much less came out of her. 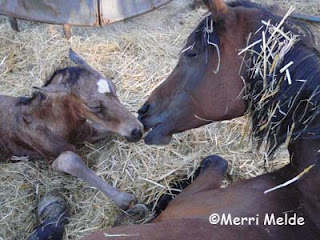 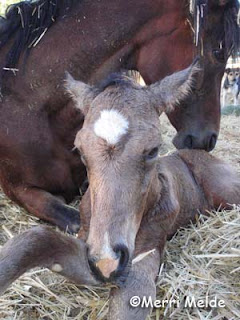 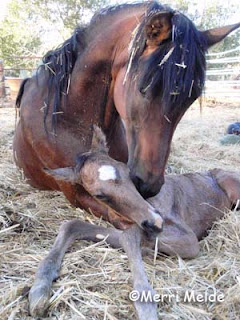 No time to waste in this new world - within five minutes he was working on standing up. 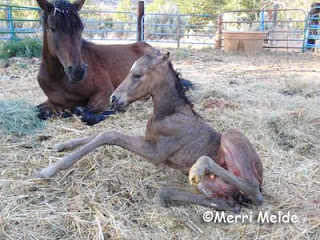 That was enough horse birthing for me - too stressful! 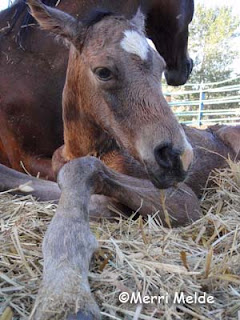 check out the bottom of the foal feet when they're born! 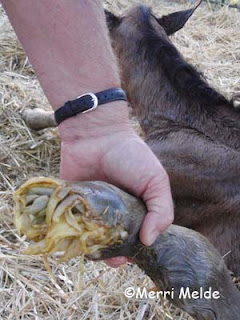 The night report from Carol was that he made it up and nursed, and the mare passed the afterbirth.

Carol's photo of The Big Q on his first day on earth. 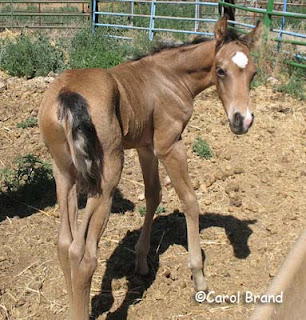 And all is well on the crick in Owyhee.
Posted by The Equestrian Vagabond at 2:08 PM