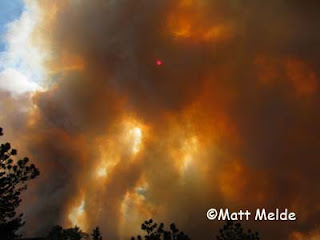 It's a firestorm of epic proportions, said the incident commander. It's an act of God, said another exhausted official. Some wildfire veterans say they've never seen anything like this one.

The Waldo Canyon fire line rages along the western side of Colorado Springs, flames engorging the skyline over the city, filling the front range with smoke up to 20,000 feet in the sky. The flames are 1 1/2 miles from my brother's house. They evacuated 2 days ago and are staying with friends, anxiously listening, watching, hoping, and praying.

I've heard and read about and glanced at pictures of wildfires over the last couple of years, big fires, burning tens of thousands of acres, and I thought, bummer. But now it really hits home.

As of Thursday morning - 5 days after the fire started - over 18,500 acres (29 square miles) had burned with 5% containment. The cause is still under investigation. 32,000 people have been evacuated. Hundreds of homes have been destroyed. So far, no one has died or been injured, which is a miracle.

Today, mercifully, the weather is cooperating somewhat, without the 60 mph multi-directional gusty winds that have made the fire so unpredictable and out of control, although there is still wind, and record heat (in the low 90's) and low humidity, and the chance of thunderstorms, increasing the possibility of more fires started by lightning. Firefighters from around the country and across multiple agencies are now in place on all edges of the fire, and expect to contain a larger portion of the fire today with the better weather.

Not to underestimate the danger to people, the danger to large animals is also real. This photo has been posted on Facebook and several news websites: 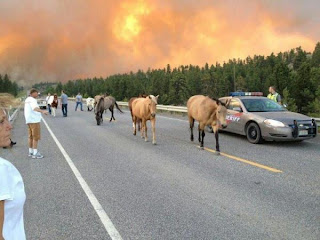 Volunteers are hauling away horses and cattle from the danger zones. Thehorse.com reports 200 horses have been evacuated from near Manitou Springs and are being cared for.

Stolen Horse International (http://netposse.com/)
offers free listings to any owners who are missing horses from the fires (as well as other major disasters).

Horse Evacuations East (http://www.facebook.com/HorseEvacuationsEast connects people who need evacuation assistance and shelter for horses during a natural disaster to those who can provide it.

Consider donating to Stolen Horse International, or to the Humane Society of Pikes Peak Region online at https://www.hsppr.org/sslpage.aspx?pid=1015.

(As always, when donating to any cause, do your homework and make sure it is not a scam - the Good People come out in an emergency, and so too, unfortunately, do the Scammers.)

Two weeks ago we had a fire in Owyhee County along the Snake River 20 miles from here as the Raven flies, over the trails we'd just ridden 2 weeks earlier on the Owyhee Fandango endurance ride. The winds kept it moving away from us. A month ago, a small fire started about 10 miles from here, closer to the mountains. A thunderstorm may have started it, but another convenient thunderstorm kindly put it out.

But if we had a closer fire? It's not like we'd be told to evacuate - we'd just have to keep an eye on things and decide for ourselves.

It makes me think - what would I do?

Get the horses out of here first of all - trailer them if there's time, drive them, chase them, cut fences...

And then? If I had a day… or a couple of hours, obviously I'd have time to load my car, or a horse trailer with stuff.

If you had 5 minutes, what would you grab before fleeing? 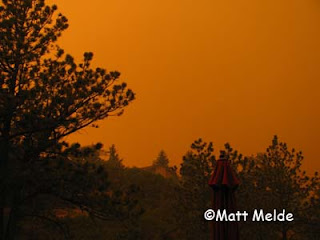 P.S. Thursday night update - my brother's neighborhood so far survived, and the southern part of it has been downgraded to a pre-evacuation notice. (But it's not out of danger yet - his northern area is still under evacuation notice.) Fire size is down to 16,750 acres at 15% containment, 346 homes destroyed. One person has been found dead so far. Tremendous progress today by the firefighters and cooperative weather.
Posted by The Equestrian Vagabond at 9:40 PM