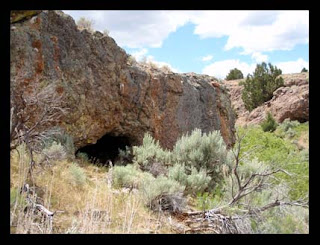 While out pulling ribbons from the Owyhee Fandango endurance ride, I came across this young gopher snake digging a hole. I didn't want to get too close because while they aren't poisonous, I hear they can give a painful bite, and I didn't want to bother him at the task at which he was very intent, so absorbed that he ignored this beetle who didn't seem to realize he was in mortal danger. (But then, maybe beetles taste bad to snakes.) I couldn't see anything through my camera screen so I was guessing at what I was shooting, and I was holding my arm out as far as possible, but in this video you can still see the excavating skills of this snake.
[video here]

In addition to the Raven cliff nest I stumbled across with 4 noisy fledged Ravens, I discovered a new hidden little canyon and cave as I cut back to my starting point across country. 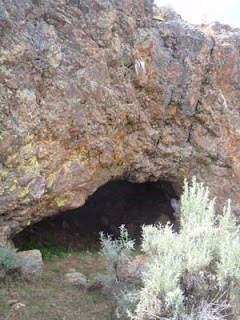 Sometimes when you're out in the boonies and you stumble across something really cool, you fantasize that maybe you're the only person to have found it (not counting the Native Americans who lived here before the whites took over, because in 'our discoveries' we never count the Native Americans - but of course they always knew these places first). I'm unlikely to have been the first white person to find this cave, since not far downstream is the Rock Corral and the sentinel caves surrounding it.

But it is likely few modern people have stumbled upon this place, where the cave overlooks an intermittent creek which, by the looks of the thick trees and vines in the middle of it, runs permanently in this little canyon. 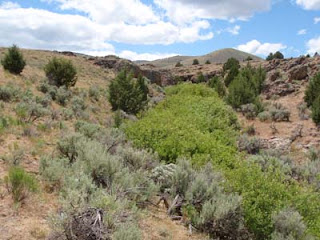 I approached the cave somewhat warily (always looking out for cougars!), and while finding it empty of large mammals, found it large and roomy and accommodating - to rats and mice and perhaps bats. The ubiquitous packrat nest occupied the far end of the cave which dissolved up into a notch in the rock wall, and little nests were stuffed in little pockets in the ceiling. 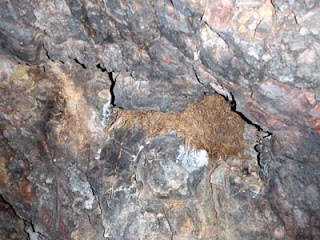 No old archeological signs, no obsidian, and no mammal footprints or recent bed impressions in the cave, in which I could have comfortably stretched out or sat tall in, but there was a trail (not used recently) which ran from the mouth of the cave down to the creek. Something larger than a rat has used this cave at some point. 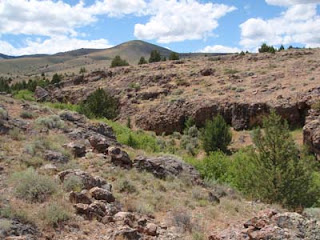 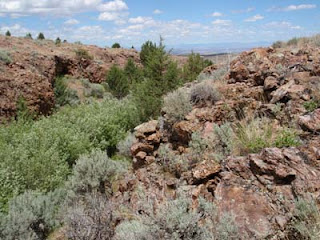 Posted by The Equestrian Vagabond at 5:56 PM