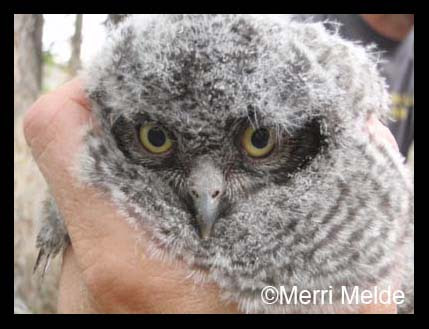 I've been lucky enough over the years to have helped with spotted owl research and banding. And I was lucky enough to participate in helping to band screech owls with the Boise district BLM! They take out a handful of people on raptor banding trips throughout the year. I signed up for this one about 6 months ago.

Retired biologist John Doremus started working with raptors for the BLM in 1972, and he was the raptor biologist for the Snake River Birds of Prey National Conservation Area in Owyhee County along the Snake River since it was first designated a Natural protected area in 1993. He started hanging nest boxes and building nesting platforms for raptors, and banding and monitoring the birds; and as the BLM manages this NCA, they continue this raptor banding and monitoring today.

A group of us went to a number of these nest boxes occupied by screech owls along the Snake River. 4 of the 5 boxes were occupied; 3 nests had owlets too young to band (1 week old and 2 weeks old); we banded one nest with 5 young (3 weeks old).

Here's how you catch a screech owl: Greg Kaltenecker from the Idaho Bird Observatory was the Master Raptor bander. He climbed a ladder to the nest box, opened the top, and reached in and removed the adult (presumably) female screech owl and handed her off to one of us; 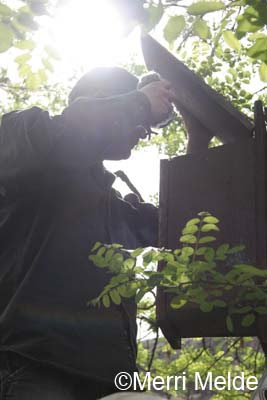 then one by one he reached in and removed the 5 owlets.

When owls are upset or feel threatened, they snap their beaks. All around us were the Snap! Crackle! Pop! of agitated owls. After a while though, as long as you don't make loud noises or make sudden movements, they relax in your hands.

Greg attached a silver federal band, each with a unique number, to the right leg of each owl, then weighed each of them, while Jill recorded the info. 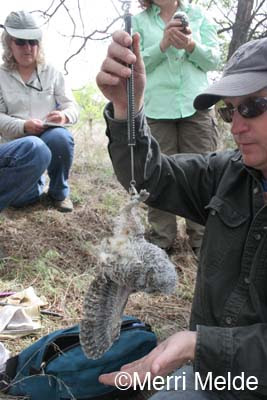 The owlets were sublimely, ridiculously cute, and of course we all posed with our fluffy little treasures before Greg tucked them all snugly back in their nest box, putting mama screech in lastly on top of them. 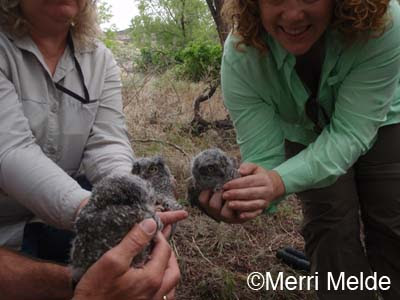 One day, maybe each of these babies will be sitting on nests of their own along the Snake River.

Posted by The Equestrian Vagabond at 9:28 AM