It was a cough that became the monkey wrench in the Tres Fabulosas original team plan of me, Carol, and Connie riding the Owyhee Fandango 100 miler together.

I'd heard Jose cough a couple of times before the Fandango, including one of our training rides. He never had a temperature, never felt less than fabulous, under saddle and with the herd, but it made me start to fret: a worry worm stuck in my craw.

I had Robert the head vet check Jose out on Thursday (Day 1 25 and 50 milers were Friday, Day 2 25 and 50 milers were Saturday, and Day 3 30/60/80/100 were on Sunday), and he couldn't find any congestion, and of course Jose didn't cough for him. But my worry and doubt remained unchanged. Judging by the way Jose looked and felt, and having no temperature, even if he had some remnants of a cold, I knew he could do a 50. But… a 100? There's a world of difference between a 50 mile ride and a 100 mile ride. It's not just the mileage that adds up, but the time in the saddle and the cumulative stress on the body; and if you are starting with something already compromised, well… I would just die if anything happened to Jose.

Thursday night, when the weather forecast looked dismal (to some people : ) with rain, rain, and rain and cool temperatures predicted, a new plan hatched. Steph had planned to ride Batman on a 50 on Day 1 with Amanda and her new moose of a Shagya, Breve. But Steph hates cold wet weather as much as I love it. So… Jose and I would ride with Amanda and Breve on the Day 1 50, and Steph would become a Fabulosa and ride the 80 miler along with Carol and August, and Connie and Finneas on the 100 (and possibly elevate to the 100; both distances would start at 6 AM).

But when Friday morning dawned cool, and seriously raining - who likes to saddle up in the rain and go out on a 50 mile ride, much less handle a horse new to endurance riding in the mud? Plans changed to me and Amanda riding the Day 2 50, and Steph and Connie and Carol would still ride the 80/100. Day 2 arrived with heavy gray skies and a light rain, that lasted all day, but Amanda and I saddled up anyway. I think I can safely say, among the total 37 starters in both distances for the day, I was the only one grinning from ear to ear all day long, not just from riding a Fabulous horse, but riding him on a Fabulous wet and cool day in the desert.

Jose and Breve went great together. Amanda was thrilled with Breve's first 50. Jose felt Fit and Fysically Fenomenal and Fabulous all day. He did cough, once at 5 miles, once at 10 miles, and once at 15 miles… and that was it. He probably could have done a 100 just fine (physically he felt like a monster), but if he'd have coughed at 5 miles on the 100, I would have been worried for the next 95 miles. I did love the rain, but the mud was something else. On the north side of the highway for loop 1, the sand footing was good. On the south side of the highway for loop 2, it got slick and sticky. Gumbo Mud, Shirley calls it. I have christened the Brown's Creek hill as SlickSnot Hill. Amanda thought she'd do her horse a favor and get off and walk up it. Bad idea. She had to stop and rest halfway up as she'd carried half the hill up on the bottom of her shoes. The clay mud cakes on like glue. She couldn't even lift up her leg for a photo. 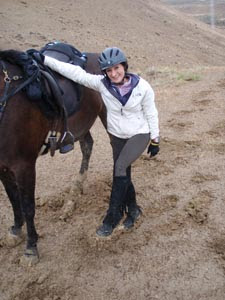 That's when Jose started having boot trouble. He lost one Easyboot glove, and after I put it back on, it stayed on another 5 strides before coming off again. It weighed an extra 5 pounds, and I couldn't scrape the clay off. We weren't far from a water stop, and there I rinsed and scraped 2 1/2 pounds of clay off to where I got the boot back on. It stayed in place for another 2 miles or so, but it was so deep and goopy that Amanda, riding behind me, never saw it come off. Maybe Steph will find it when she unmarks trail after the ride, or we might find it sprouting flowers out of the inside next spring.

Jose lost a second glove after climbing the Hart Creek knife ridge. Amanda didn't see that one come off either. We were only 5 miles or so from camp, so we just travelled carefully over rocky sections. Tami Rougeau, following a half hour behind us, found one clay glove and carried the 5 pounder back to base camp. The horses handled the going well, adjusting their strides to the different depths and slickness and consistencies of the mud/clay/puddles. There wasn't a single pull all day, and by the end of the day, I think everybody was finally smiling. It was another great day to ride in the desert, another 50 miles for Jose and The Raven!

and many more videos and photos from the Owyhee Fandango here on Endurance.net!
http://www.endurance.net/international/USA/2012Fandango/

Posted by The Equestrian Vagabond at 5:34 PM