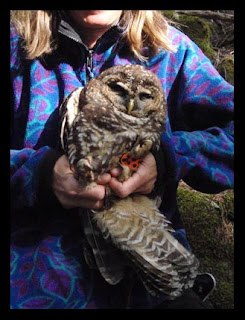 There was the Owyhee Tough Sucker II where I got to ride Jose, and I wore a helmet cam, stalking Steph and Rhett like the paparazzi, as Rhett went for his 6000 miles. I made a video of the vetting in on Friday, and Steph made a video of loop 1 of the ride and you can see them both here on Endurance.net.

Right after that it was off to the forest in eastern Washington where I helped with spotted owl research. That's on my resume in a past life, and I still jump at the chance to do it occasionally. The above photo is a new spotted owl known as Orange-With-Black-Dots-Left that we found and banded there last year. He and his mate raised two young. We didn't find any owls at the same place this time, but hiking around their territory, I felt they were there, somewhere. 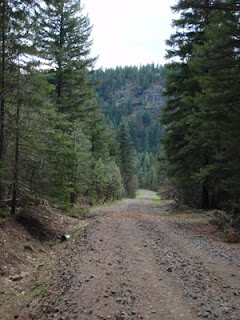 Now I'm home long enough to hug my horse and repack, then I'm off to the Idaho Writers and Readers Rendezvous in Boise over the weekend. Adventure author Tim Cahill (one of my favorites) is the one of the keynote speakers.

It's the same weekend that the Kentucky Derby will be run. Really, I'm not much interested in racing anymore since Zenyatta retired, (OK, except for Black Caviar), and I won't see the Derby anyway, but I'm mildly interested in the Parma, Idaho-raised horse, 50-1 Rousing Sermon, and one of the favorites, Creative Cause. He's trained by Mike Harrington, who was the veterinarian for our barn at Longacres in Washington 20 years ago when I was a groom. I won't be leaving any of the lectures to watch the Derby, but it'll be something to watch a replay of when I get home.

Posted by The Equestrian Vagabond at 9:47 PM