Close Encounters of the Jackass Kind 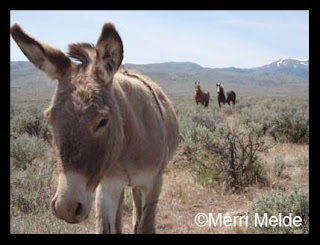 Remember the incidents with the Jackass last year?

He's a semi-wild brash donkey who hooked up with two wild horses out in the Brown's Creek drainage.

A few horseback riders have had unfortunate encounters with him (see the above link). The virile donkey appears to prefer geldings to mares in his amorous advances. Rushcreek Mac and John were disconcerted by him enough during our September Owyhee Canyonlands ride that they missed a turn on the trail for trying to outdistance the 4-legged Lothario.

Last year I encountered him on foot while hanging ribbons for an endurance ride, but he didn't want anything to do with me.

Today I was out on foot again, marking the trail past the rock corral in Buckaroo crick and up onto the flats, when I spied the two wild horses.

Last year when I saw him, he gave me a wide berth in the trail; I couldn't have gotten closer than 50 yards if I'd tried. As for the mustangs, they were now 50 yards away which is closer than I've ever gotten to them, but they started - rather animatedly - following the donkey toward me. 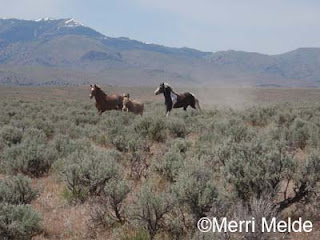 I kept talking to the donkey, and he kept coming closer, unafraid, and he stopped two feet away from me. 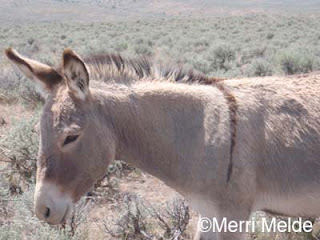 I lifted up my hand and stuck my finger out. He stretched out his neck… further… and I touched the jackass! 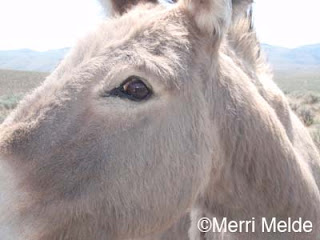 He then took two steps toward me, into my space, and I suddenly remembered he is a horny jackass, towards some horses anyway, and, while he was the size of a pony, he still had 4 feet that could kick, some teeth that could bite, a big honking head he could swing like a club, and the body strength of a mule. Just in case, I swung my backpack off my shoulder onto my arm… and he took a step back. In this country I always carry a plastic garbage bag - something I can open up to flap around and make a lot of scary noise - and I put it in my hand… just in case.

The two wild horses were on high alert and were now within 30 yards of me. Fine looking pair they are. 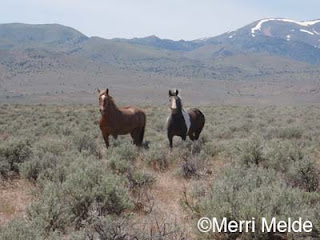 The donkey just stood and looked at me, and I stuck out my finger again, and he sniffed it and touched it, then I stepped back, and turned and headed on my way. 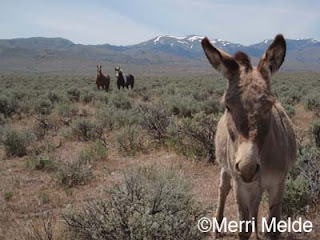 They watched me, and the donkey followed a ways behind, almost as if he didn't want me to go. It must have been a boring winter out there, no other horses to harass, and no humans to listen to. 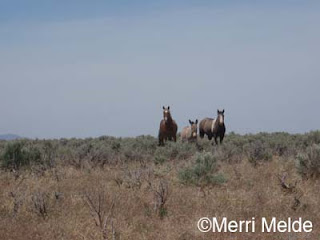 Some local cowboys have talked of going out there and catching him and those horses, but I kind of like seeing them out there. It's as if I know a special secret - a couple of special friends out in those canyons and washes.

Posted by The Equestrian Vagabond at 8:12 AM