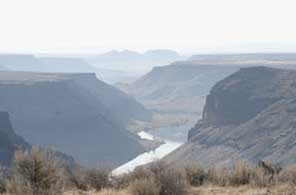 If you ride up onto the flats above Pickett Creek and look to the southeast, three drainages over is Castle Creek, coming down from the Owyhee Mountains. Look northeast and you'll see where Castle Creek meets the Snake River, and part of the Oregon Trail and Castle Butte just this side of the river. 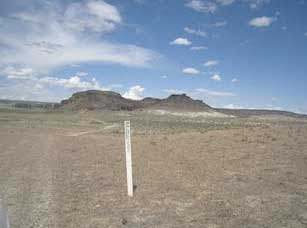 If you were here 149 years ago, following the Oregon Trail in a covered wagon by Castle Butte, you might have been riding into big trouble. On September 9th, 1860, (an alternate date recorded is August 1860) the wagon train led by Elijah P Utter (sometimes spelled Otter) was attacked by around 100 Indians, probably Bannock and Boise Shoshone.

There were 44 emigrants total in the group - 4 families (12 in the Utter family, led by father Elijah) and 2 Reith brothers. They had gathered together from southern Minnesota and Iowa and started on the Oregon Trail westward.

One of the biggest dangers faced by the emigrants crossing the country - besides injuries, illness, bad weather, wild animals, treacherous terrain, getting lost, and anything else under the sun - was attacks by Indians.

The Utter wagon train was attacked. The wagons were circled to protect the livestock the Indians were trying to stampede. The conflict stopped momentarily when the white men offered the Indians food. The wagon train started moving again, but they were shortly attacked again on Henderson flat. The fighting lasted into the next evening, when the emigrants again tried to move onward to the Snake River, as they and their stock were desperate for water.

The Indians renewed their attack; in total approximately 50 Indians and 19 whites, including Mr and Mrs Utter and 4 of their children, were killed. The Indians turned their attention to plundering the wagons; the remaining 25 emigrants fled and hid, leaving everything behind but a few firearms, and continued on foot down the Snake River, traveling by night and hiding by day.

A week later the survivors arrived at the mouth of the Owhyee River 75 miles away, where most were too weak to continue. The two Reith brothers went to look for help; the rest hunkered down here and waited for rescue, including 18 children.

After two weeks, more Shoshone Indians appeared at the Owyhee camp and traded some food for the last of the survivors' possessions, and stole their guns.

The Van Norman (sometimes spelled Van Ornum) family then struck out to look for help. Three young girls were taken captive by Indians; the rest were murdered. (The girls were apparently found several years later.)

By this time the Army was out looking for the survivors, having gotten word from the Reith brothers, who had finally made it to the Umatilla Indian Agency in Oregon for help.

The murdered Van Norman family was discovered by the Army, six weeks after they had fled their wagon train; and finally the debilitated party on the Owyhee River was found, 16 people who'd survived on berries, frogs, snakes, mice, a few fish from the Indians - and the bodies of a man, boy and infant who had died. Several young children had starved to death.

This Saturday, at the Hallowed Weenies endurance ride down the road in Owyhee county, we'll have something besides Halloween ghouls and goblins to ponder as we ride over the site of the attacks. 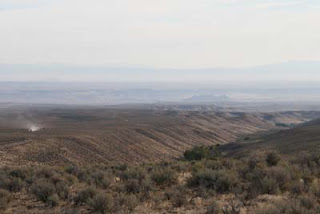 Posted by The Equestrian Vagabond at 8:21 PM