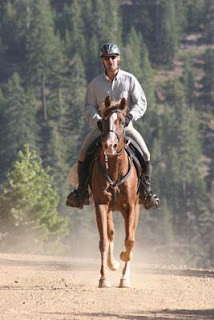 He's a bit like an art sculptor, who gathers the different material, works and molds the pieces into one form, shapes it into a piece, and finely details it for the Big Show. But instead of clay or metal, Tony Benedetti, Chef d'Equipe for the Pacific North riders, takes 6 endurance horses and riders from different backgrounds and with different goals, and molds them into a team, shaping them into a finely tuned machine for the Big Show - the Kentucky Cup Endurance ride.

Tony's a bit like a chess player too, trying to figure out the best moves with the best riders and horses to get the best performances out of all of them. Of his 6 horses and riders now in Kentucky, he'll have to choose 4 to be on the Pac North team, and 2 to ride as individuals - and with the talent he has behind and between the reins, that's going to be a difficult and strategic move.

in 1993 Tony was a rider on the North American team, and that was where he realized 'chefing' was very important. He thought it could be done a different way, and that's what got him started doing it. He's been a chef d'equipe "about very other year since 1995." And he thoroughly enjoys chefing and coaching riders. "It's satisfying - helping riders and squads turn in the best ride possible, with the ultimate goal of winning a medal."

He likes the task of taking 6-12 individual people and creating a team culture - and ultimately being successful while having fun getting there. "That is very important, because if you don't have fun, why bother with it?"

Shaping and coaching a group of riders for such a big event is a great challenge. "Despite saying 'this ride is like any other ride', international competition is not like any other ride. It's more difficult, more intense, they've travelled further, and trained more stringently. Most riders don't ride as a team, ever, so that's a different challenge in itself."

Tony is going to have a very difficult time choosing his squad of 4 and the individuals - "it's a great group of very equal and very experienced riders and good horses to work with." The Pacific North riders are Dennis Summers and SHA Ebony Rose, his wife Sue Summers and Mags Motivator, Joyce Sousa and LV Integrity, her daughter Jennifer Niehaus and NH Copperblaze, Gabriel Mann and CM Big Easy, and Carol Giles and SAR Tiki Galaxy. These riders have previously been on 5 World Championship and Pan American teams.

With such talent, several of them capable, on a good day, of finishing in the front, will his riders try to win, or will they just try for a team and individual medals, or will they be riding just to finish well, with the ultimate goal being riding in next year's World Championship?

"Everyone recognizes that next year is The Big Race. But everyone wants to come here and do well, too. They don't want to leave their best race here, but they do want to be competitive. There are some riders in Kentucky not going for the WEC team next year; this one is their big race. Every rider is a bit different." He'll talk to all of his Pac North riders to assess their goals; he'll also look at how the horses have done over the season, and how they are faring in Kentucky - how well they've held up to travel, how they're eating, how sound they are, how they look and feel.

With the strong group he's got, he can't go wrong no matter what he decides.
Posted by The Equestrian Vagabond at 6:56 AM