Things That Go Bump in the Night

It's the out-of-place noise in the middle of the night that rips you instantly awake, makes your pounding heart race in your ears and adrenaline shoot through your body. It's not knowing what's out there in the dark that triggers the sweaty palms, the trembles, the fear.

Thumps. Footsteps. Things knocked over. Something in the brush. Something out there in the dark you can't see. The sound that does not belong.

The Dark is big, overpowering, a heavy presence full of questions, that hides... things.

Out here in the Boonies there are coyotes, and maybe a rare cougar silently skulking through, or other...things, but the noises usually come from horses getting into trouble.

And that inspires a fear all its own.

Once in the middle of the night: a big crashing at the neighbor's. Sounded like a horse got into something and was struggling. I was instantly awake, heart pounding - bad noise, something terrible was going on in the dark. Got up and ran to the phone, called the neighbors. No answer. I didn't want to traipse over there in the dark with my flashlight - didn't know where to look, and didn't really want to see what I might find. Didn't want to scare the neighbors snooping around their place with a flashlight. The sounds finally stopped. (A horse had gotten hung up in a feeder, but had extracted himself miraculously without injury.)

Another night, from the neighbor's: sounds of many running hooves clattering over rocks. Sometimes the herd runs around and plays... but in the dark? Not usual. Then, one horse whinnying. More running around by the herd. The same single horse whinnying over and over. I recognize our horses' voices, but I didn't know this one. Something was wrong. Do I get up, go out with a flashlight and try to find the horses and find what's wrong? If I find what's wrong, can I do anything about it in the dark? Or do I burrow further under the covers, pillow over my head to drown out the noise and hope everything is fine in the morning? (The herd had broken through one of the neighbor's paddocks, and the one horse didn't follow, but nobody was hurt.)

Another night, here, around the house: footsteps on the gravel driveway in the dark. Jolt awake, get up, go out with the flashlight to confront the intruder: it's Dudley, 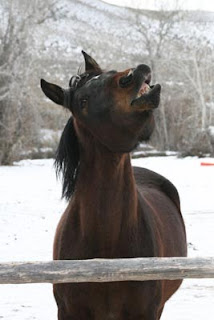 escaped from his hot-wired pen, eating alfalfa (very bad for him!), getting into a pile of his diet pills (will an overdose help?), grazing on green grass. (His pen was PROPERLY hot-wired next morning.)

Another middle of the night, here: some kind of... bumping, metal crash... and footsteps. Another startling wake-up. This time it's Jose! He got out under a jimmy-rigged pipe rail. (His fence got electrified the next day.)

Another night: a gate being pushed. And pushed, and pushed... This time I know exactly what's going on out there. I can hear the baling twine that double ties it to the posts stretching, I hear the big heavy posts straining - I get up, go out with the flashlight, find the 4 panels of the gate almost laying flat on the ground, and one big black bruiser of a horse pushing them further down - Dudley! 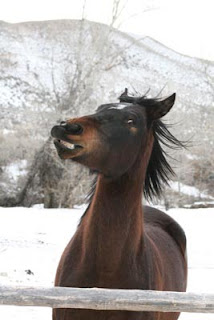 I have to move the durn horse to a smaller pen for the night. Far enough away from me that I won't hear him as he works on busting out of there, too.

Some of the sounds I can easily identify in the dark: the horses out in one field hitting the irrigation pipe as they walk or trot over it; a metal feed tub being shoved around or turned over (by Dudley); the chain on a gate being worked (Dudley); a gate being lifted (Dudley, with his teeth!).

Dudley is tenacious, like a Jack Russell terrier after a rat in a hole - he'll go for hours and hours. He'll study me as I close and latch a gate, or hook a chain, or tie a knot in a rope, 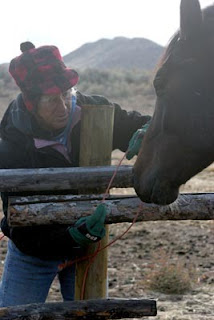 so he can work on undoing it at night, all night - and he's not quiet about it.

I guess here's it's mostly Dudley That Goes Bump In The Night. Better to get out the earplugs and sleep through the spooky nights and face the aftermath in the mornings. 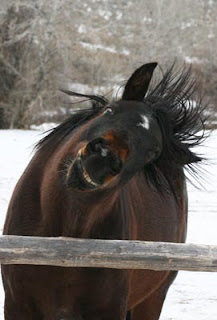 Posted by The Equestrian Vagabond at 8:37 PM