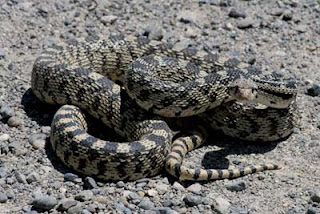 I did something rather silly.

I was driving home yesterday up Bates Creek Road, a bit fast on the dirt road... came over a hill and - WHOA! swerved and skidded to avoid a snake stretched out long ways across my path. Slammed on the brakes and skidded to a stop, hoping I hadn't clipped its tail.

I hadn't - he was still laying there, same position, stretched out in the sun.

Well, I certainly didn't want the snake getting hit by some other vehicle, so I walked up to it to try to shoo it off the road. It didn't quite look like a rattlesnake... well, except for the pattern in the middle part of his quite long (about 3 feet) body.

He didn't move when I walked up close and waved and said "Shoo!" to him, so... I squatted behind him, reached out... and touched its tail.

Quick as a flash, that snake whipped around into a coil, head up, tongue out, tail... rattling? 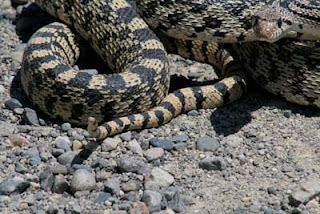 Quick as a flash, I was three feet back, my heart pounding a bit. I still didn't quite think it was a rattlesnake, but... it was coiled like a rattlesnake, its tail was vibrating like a rattlesnake and I heard... rattles? I didn't see rattles... and I started thinking I'd read somewhere that a rattlesnake might not have rattles for some reason or other (which is probably wrong). I stayed out of range of the snake's leap (I think) and tried to get a better look at it. It sure sounded like rattling, and its tail was still shaking, but I think it was really hissing.

I'm pretty sure it wasn't a rattlesnake... but maybe I shouldn't have touched it. A snake is pretty dang fast.

However, at least I got him off the road, so he didn't get run over (at least that day). Good snake or bad snake, he'd make a good meal for the hawks and the golden eagles (who still hang around, though their nest failed) along the crik.

(And reading about it later, it was a bull snake; it imitates a rattlesnake by taking the coiled posture of a rattlesnake, vibrating its tail - though instead of elevating its tail it usually keeps the tail in contact with the ground 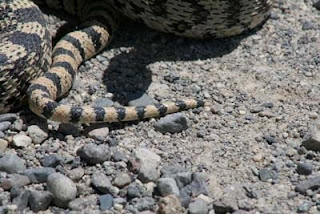 to hit brush or leaves for sound effects - flattening its head to look more like a rattler, and hissing - which sounds like a rattle.)
Posted by The Equestrian Vagabond at 3:12 PM