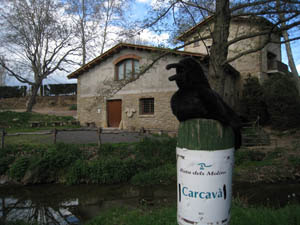 Kiwis Paul and Madonna have a place in a village outside of Vic (an hour from Barcelona) in Catalonia - a 1590 mill (that still runs on Sundays for show). Their Fisiocrem business is based here in Spain, and they are a sponsor of EnduranceEurope.com .

The mill is on a Route, the "Ruta dels molins," and the "Ruta del romanic," a maintained walk along a creek where many old mills and churches and ruins from the 16th and earlier centuries lie. These also connect with well-marked GR 2 trails that connect with other trails all across Europe, for bikers and hikers... and of course people use some of them for riding also.

I stayed with Paul and Madonna for a week to catch up on my sleep and my stories and pictures from Al-Andalus. Paco Maeso is their lawyer and spends time here also; he was here this week. We all worked and worked and worked... and then Saturday, we became tourists.

The Raven came along, and Paco was happy to show him the sights of Catalonia. Our first stop, Girona, 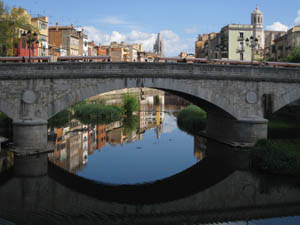 is an old Roman town with much of the old part of the town still well-preserved and functional. We wandered along the winding cobblestone streets, along and around the fortress walls, and a Gothic cathedral with the real old bells that knock you off your feet when they ring, and Arab Baths, and the Rambla - the main walking street of shops. There were a curious number of shops with designer handbags and purses for sale. You could also buy an authentic coat of armor, if you so desired to look like or fight with a sword and shield and lance like a Roman; and, to weaken your enemy's knees, there were an abundance of chocolate shops! We couldn't resist going in one and came out with bags of chocolate, filled with liqueur, nuts, and coffee beans - enough to knock Paco and the Raven 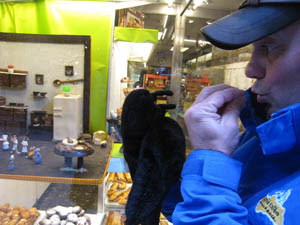 out in the car for a while. I rationed out the chocolate coffee beans and kept a buzz till Monday.

From there we drove to Besalu, 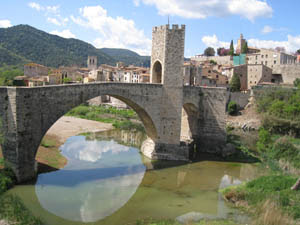 an even smaller and more charming medieval town with an old stone bridge over a river providing a picturesque - and, in the old days, protected - entrance to the fortified village. We wandered the streets, and the Raven visited with various Birds of Art 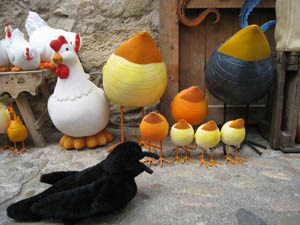 in some of the shops. We had lunch outdoors in the mild sunny weather, overlooking the river and old town. 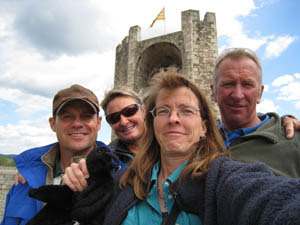 We finished our tour in Ripoll, home of the Ripoll endurance ride, and visited with the organizer, Ignaci Casas. Ignaci showed us his horses on the hotel property that his family owns - some good looking Arabians and Arabian crosses here, including some English Crabbet lines, some of which came from the Spanish National Stud in Jerez. There they have pure Arab lines from around the world - Morocco, Syria, Jordan, pure Crabbet, pure Polish... but the Stud is run by the Army, and they really just are not into the horses so much, or seem to know the treasures they have. We spent some time walking around Ripoll, then Ignaci had us as guests at a huge dinner at his hotel.

The Ripoll ride this year will be June 14 or 21 - it's one of the best ones in Spain.
Posted by The Equestrian Vagabond at 10:48 AM