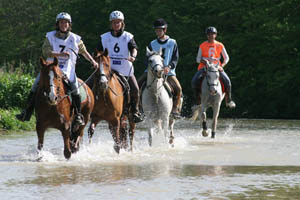 Since these blogs aren't meant to be race recaps, here I'll just put the highlights of the days of the Al-Andalus ride. At the bottom if you're dying to read the whole shebang, follow the link to enduranceeurope.net.

Not enough sleep! This was to become the norm of the ride! There just wasn't enough time to do everything, and sleep was the first thing to be sacrificed. 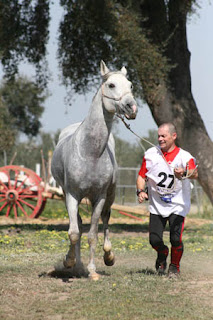 Jose Soto got to meet the Raven! I think he was pretty excited about it. 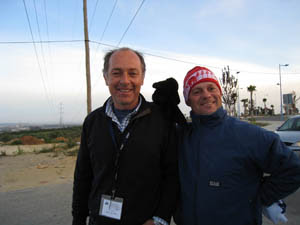 Truly wild driving! I rode with Carmen and Luis in the car with course director Nacho Pena: various versions of creeping behind horses, then hurtling past them; waiting, leap-frogging, shooting by, squeezing by, rocketing ahead; dropping back, racing beside, on four wheels or two or one, it didn't matter, squeaking past, whipping around the horses over the entire course of Al-Andalus (except for only one cliff the cars couldn't squeeze through, and one area of roof-deep sand, I think). You might think that it would be easier to just drive on the roads and meet the riders at assistance points, and then just drive on to the next crew point via roads, meeting them again easily and in advance. Well, yes, of course that would be EASIEST, but that's not the POINT. Driving over every inch of the course was the point, and passing as many horses between assistance points was the point. Letting the horses pass us, and then us passing them again was the best! (Not to mention it's a great way to break your horse to cars and quads and motorcycles passing within inches.) The extreme driving (which can accurately be described as 'frenzied') was truly as much a part of Al-Andalus as the horse ride itself! In America, you're usually on your own from vet check to vet check, even if it's 40 km in between. But here in Europe, horses and riders get assistance every 10 km or so. That's part of the rides and part of the fun. 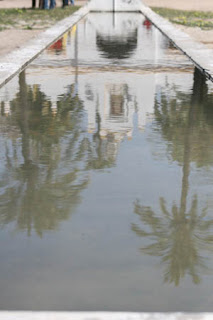 After lunch we stopped to set up an assistance point for the riders at Palacio Del Rey after 12 km, a lovely old home surrounded by a herd of cattle, fields of yellow daisies and a colony of storks that were flying around, sitting on nests, and clicking their beaks in avian conversation about the horses passing through. The horses had a long old stone water trough to drink from, and Nacho and Luís and Carmen handed cold drinks to the riders and poured water on the horses as they took a quick refreshing break after that stretch of sand. We attempted to chat/handspeak in Spanish while we waited for more riders. My Spanish can be quite amusing, but the southern Spaniards enjoy helping me learn to speak it properly. It was a lovely spot in the Spanish countryside - perfect weather of warm sun, and 23*. 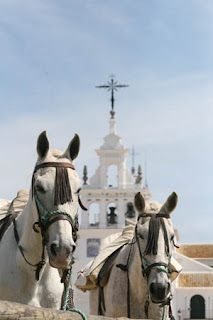 Finish was in the little town of El Rocío. For most of the year, El Rocío is a quiet little village of 800 people, with all sand streets, and hitching rails for horses in front of every building. But once a year, on the 7th Sunday after Easter, El Rocío comes alive with up to a million people, during the Romería Del Rocío, Spain's largest romería festival (pilgrimages so named because pilgrims traditionally walked to Rome, and became known as "romeros"). Pilgrims have come here every year since 1280 AD to worship the statue of the "Madonna of the Dew," the Virgen Del Rocío. It is believed that she can cure disease, infertility, and mental disorders. 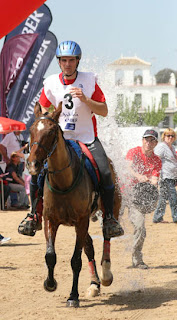 The massive white Santuario de Neustra Señora de El Rocío dominates the center of town. It was destroyed in an earthquake in 1755, and rebuilt in the 1960's. Inside is an ornate gold altar, and you may light electric candles in a little room on the side of the church. Smoke from years of real candles is blown out of a high window via a fan, where black smoke residue stains the white outer wall.

On this first Saturday after Easter, to El Rocío came the Al-Andalus equestrian pilgrims - roaming in from 50 km away for a festival of our own.

El Rocío has been named as an international equestrian village, and we could see why. There were horses everywhere when we arrived - in addition to the endurance horses coming and going, there were horses pulling carriages, horses and ponies giving rides, bitted up prancing Andalusians, and even wild horses roaming the marshlands of the Guadalquivir River delta. The finish line arch had been set up in the middle of the square beside the church. Ladies in traditional flamenco dress and high heels wobbled through the sandy streets in front of a smart pair of draft horses - showing off their pompoms by shaking their heads at each other - pulling a carriage, their drivers dressed in Andalucian hats and fine long-tailed coats. There were souvenirs, stores selling carriage harnesses and flamenco dresses side by side, and the smell of freshly harvested strawberries in the air. 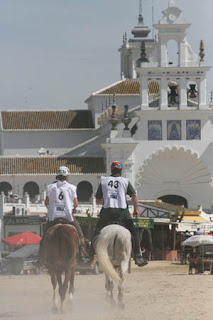 Many spectators strolled among the horses and on the promenade along the lake. The lunch/dinner was served under a big temporary tent (this was put up nearly every day for the lunches, then taken down and transported to the next day's ride end). Riders and crew packed the tables and chairs, and spilled out onto the lake walk, devouring plates filled with garbanzo beans and cooked beef, vegetables, and apples and oranges. It was pleasantly cool in the shade under the blooming jacaranda-like purple trees.

We stayed in little bungalows at a camping place for the evening, plain and very comfortable. Late to bed, with alarms set early for the next morning - AND we lose an hour of sleep tonight!

For more details and pictures, see www.endurance.net/merri
Posted by The Equestrian Vagabond at 2:06 PM