Al-Andalus Day 8: On Top of the World - La Beata 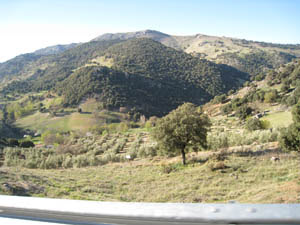 
The last day of Al-Andalus: Steph got to ride Arenal on the last day; I got a ride with Flemish-born Spanish photographer Kristian Fenaux. The riders officially left the starting line at 9 AM at the bottom of Alcala la Real (a half-hour drive from Granada), then headed up into the town to the La Mota Castle - dating back to 727 AD when the town was under Muslim rule - for a picturesque start. Kristian and I headed down the highway to search for the first Assistencia point in the mountains.

Some of the driving directions weren't quite on the mark, but having been here the last two years, Kristian knew where to go; it was a long uphill winding narrow road that would be slow going for the vans and cars pulling horse trailers. We arrived at the stop long before anybody else showed up, and found a good place to set up and wait.

I had plenty of time to think about all the circumstances that led me down the endurance trails to this beautiful mountain path (in short, sticking my toes in my first endurance saddle with Shelley in Texas, Shelley putting me in touch with Jackie in California, at Jackie's meeting Steph and John from Idaho, starting work for them beginning in New Zealand, Spanish Paco riding in New Zealand and inviting Steph to ride in Spain) ... and here I was now, sitting by a dirt road on a cool sunny morning, in the deep old Andalucían countryside, below an old ranchhouse, listening to belching Spanish goats and hooting birds, waiting for horses to ride by. Lucky or what? 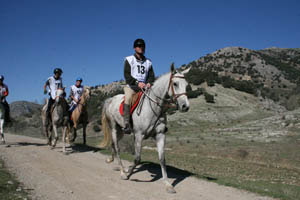 The high rocky hills with sparse grass were ideal for herds of goats, and the encinas - oak trees - that produce acorns specific to the diet of the Black Iberian pig, the special breed that produces the exquisite Iberian ham from this region. It is said that the fat of the Iberian ham is good for you - the grease is good grease, being full of antioxidants, because of the pigs' acorn diet. If your doctor here in Spain tells you to go on a diet, he may very well tell you to eat plenty of Iberian ham. It's not only the pigs' diet that makes the ham taste so good, but the cut (or the cutter). It must be sliced very thin, and it's an art form to be able to do so. And you CAN taste the difference - it is an amazing delicacy. I don't think I can ever eat another slice of processed American ham on a sandwich - ick.

The riders seemed to be a long time coming, but there were no complaints from me! Finally the lead motorcycle and a 4-wheeler came by, followed by José Soto on his motorcycle, who stopped to visit. It turns out the riders were directed the wrong way from the castle by the policemen, and briefly got lost in the town. "How's the trail today?" I asked. José shook his head. "Very hard pass, up, up, steep downhill, many stones." "Did you ride your bike on it?" I asked. He laughed, "No, I ride in city." I guess he won't be off-road racing Inés or Alexis any time soon.

When the horses first came, they came in a herd, 7 or 8 in the first group. Steph was not far behind, middle of the 16-horse pack, thrilled again with the scenery and the technical trails - her favorite kind of ride. Today's ride was the highest altitude of all of the days; the horses climbed from 822 to 1340m (up to 4400'). Much of it was through - or above - olive orchards, which stretched as far and deep into the valleys as you could see, up to the very edge of cliffs. One figure I heard was that 40% of olive oil sold in Italy comes from this region of Spain. Easy to believe with the astounding number of olive trees we've seen in the last week.

The first vet gate and finish was at La Beata, a fantastic equestrian facility with a small hotel, sand arenas, a small track, perfectly manicured green fields with herds of horses tirelessly and flamboyantly galloping and bucking up and down the fields (for hours), as if they were choreographed for the audience. 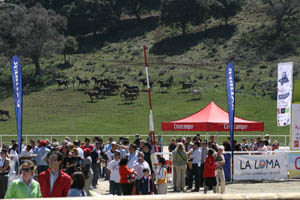 The firm arena is a moist sand mixed with recycled paper, and both the arenas and fields are electronically moisture controlled. Today the grounds had a summer festival air: a temporary restaurant under a big tent, and outdoor barbeque tapas; the Meta finish arch and sponsor banners lining the run-in, the Al-Andalus truck-cum-stage, the water-Aquarius-Coke-Cruzcampo-Kaliber stand, and a couple hundred people roaming around through the afternoon, horse people and non-horse people. 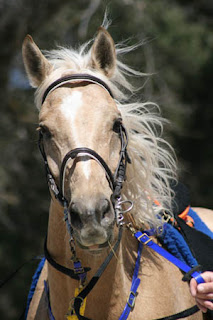 and the following horses crossed the finish line, the biggest applause was for 12th horse and rider to crossed the line on this last day. 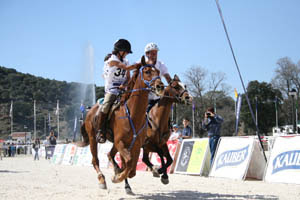 Jose Baquerizo and Campanera finished today in second as Binomios - 1 horse, 1 rider team - and in first place overall of 2008 Tierras de Al-Andalus. I didn't know the man personally, didn't know the horse, but just seeing how happy he was and how proud he was of his horse 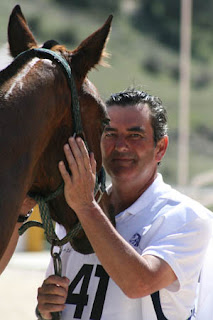 - what a delight to be able to share the moment of such an accomplishment! And he did it by just riding steadily every day and taking good care of his horse. José was the man on top of the world in Andalucía today.

In the evening, at our hotel in Jaen, the party began. First came the awards presentations, 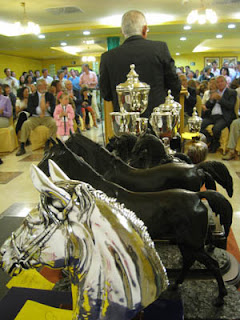 then delicious tapas and more tapas, meat, cheese and desserts; beer, wine, champagne. If you shook your head at the trays of tapas continually passing in front of you, you were encouraged to take just one more. And how could you say no? The crowd mingled and imbibed; some said their goodbyes and gave farewell kisses, or instead of goodbyes, "El año siguiente" - next year... and then the party drifted across the street to the disco.

Now, I haven't been in a Disco since college (well, except for that one in Ireland a decade back...), but this was no disco like we know it. It was a dance room with a cracking flamenco band that got the Spaniards out on the floor showing off their moves. I think they all have a little of the toreador deep down in their bones, because those that did the "Sevilla dance" (which was most of them), did it so well and so gracefully: the elegant, playful, seductive moves like a bullfighter, the flicking of the fingers like the twirling of capes and the stamping of feet like the bulls in the ring. The flamenco and the bullfighting must be closely related. José Soto and his wife were quite the elegant dancers also! 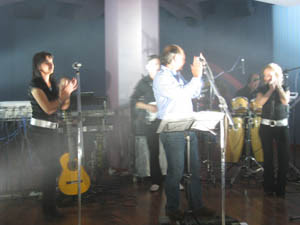 - something many of us had been looking forward to all week! - the whole room joined in, dancing and singing with him, knowing most of the words to his songs. We kept cheering "Bravo!" "Mas!" after each song, and we would have kept him up there all night if he'd been willing. "Even after 8 days of constantly talking, yelling, the dust, the wind, he still sings beautifully!" said Alexis. Alberto Flores, a quiet pleasant working man by day, was the Dancer del Noche - captivating all by his moves on the dance floor, the center of a ring that everyone got pulled into with him at one time or another. A group of men hoisted José Baquerizo on their shoulders and danced with him around the room. The young riders made a train that danced through the middle of the crowd. And the flamenco music played on.

And so wound down, into the wee wee hours of the morning, 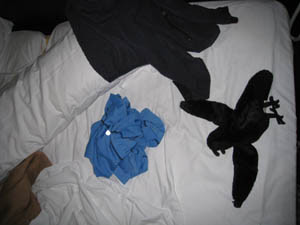 the great experience that was 2008 III Raid Kaliber Tierras de Al Andalus. It was a pleasure and a privilege to be here, and I hope to return next year... perhaps on the back of a horse - with the Raven.

More stories at www.endurance.net/merri
Posted by The Equestrian Vagabond at 10:24 AM