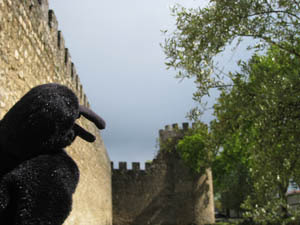 I went to Portugal for the 2008 Portuguese Endurance Championships... and afterwards was a guest in Evora, Portugal, of Vasco Lopez Avo and his family in their lovely little hotel, 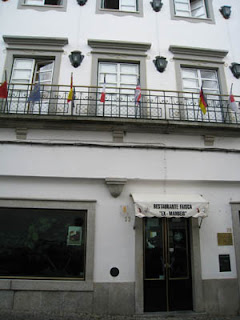 the Residencial Os Manueis, in the center of the old part of the city. 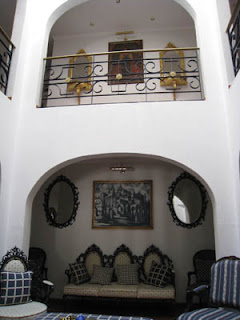 In the Alentejo Province of Portugal (the region south of the Tagus River - Rio Tejo), Évora is a UNESCO World Heritage site. Much of the original old walls and buildings are preserved from Roman and Moorish times. The original fortress walls still surround nearly the entire inner town, and an aqueduct from the 16th century. The streets are cobblestones and narrow and lined with tall buildings; the newer buildings are often built into, over, or under the original buildings. The Templo Romano 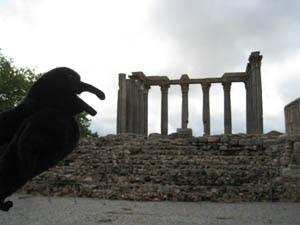 is a well-preserved Roman temple (Templo de Diana) from the end of the 2nd century, which sits in a plaza on a hill with a view over part of the city (it was the Raven's favorite); there are old arches, old churches and convents and cathedrals (one has a banner outside the doors, "Celebrating 900 years"), and a high aqueduct (which stretches for 8 km, and runs into the city) rectangular stone water tank from the 16th century.

It's also a university town with 8000 students; the University of Évora was formerly a Jesuit college built in 1559. The central square (which the hotel is a half block away from) was always a hive of activity - outdoor cafe seating, or, one day, a race for young boys through the streets of the town and into the square, and yet another day a big stage being set up for some event.

The Hotel Os Manueis was acquired by Vasco's family in 1952. It was remodeled just 3 years ago, and is an extremely comfortable, homey place, with a great view on the rooftop terrace. Start talking horses with Vasco or his father or his brother Eduardo, and you won't want to leave.

It gets up into the 40's here in the summer, but for now, the cool weather was perfect... even if you had to dodge the 15 minute rain showers throughout the day. 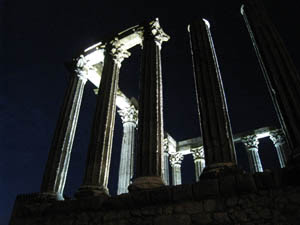 Posted by The Equestrian Vagabond at 2:15 AM