Al-Andalus Day 4: Sea to Mountains to Sea - to Algeciras 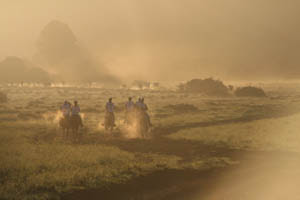 "I mean - I saw the Rock of Freakin' Gibraltar today!" was how Steph described the end of another great day of riding in Al-Andalus. What more need be said to sum it up? 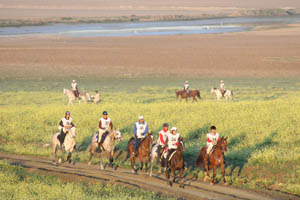 Stunning photos in the morning sunrise, 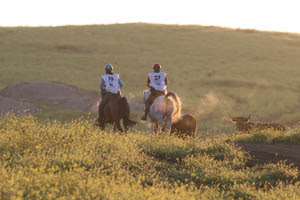 of horses riding through cows gamboling in green fields and yellow flowers, 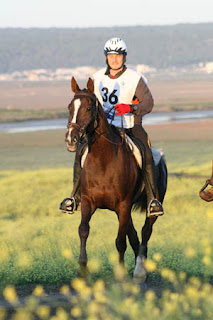 as riders made their way up into the hills and orchards of alcornoque, or cork oak trees. They are used for just that - cork. The soft bark is harvested by hand from the ground up the trunk every 10 to 12 years; this doesn't hurt the tree, and the bark regrows and can be harvested in another 10 years. The trees live for 150 to 250 years... apparently it's a very profitable business - and 15% of the bark use goes into making wine corks, and it produces over 2/3 of the profits.

Lunch was near a little white village towered over by wind turbines. 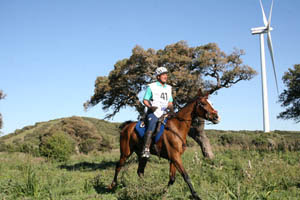 Steph thinks they are cool and "elegant." I think they are freaky! But they make interesting backdrops for photos. 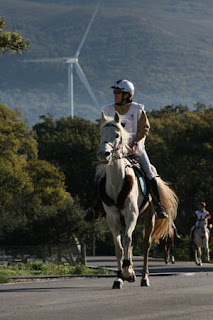 Afterwards, Nacho drove his car like a demon up into the mountains - where we passed some real Spanish vaqueros on their beautiful, composed Andalusians 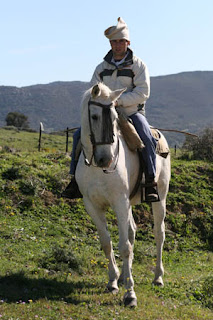 - up to a scenic Assistance point for the endurance riders and horses, overlooking the canyon from where they'd climbed. Steph was still grinning from ear to ear, about her ride, the scenery, the privilege of just being here on a horse. 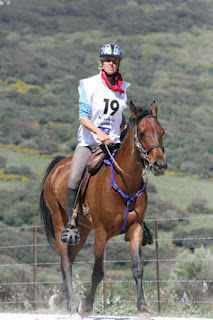 Then it was truly an insane, reckless drive to the finish at Algeciras. I think today there was perhaps a car race going on down the one-lane narrow winding mountain road with thousand foot drops off the edge, and I do think we were winning. These southern Spanish, they take their fast driving very seriously. I looked out the side window so as to not see exactly when or how we were going to die, and not worry about it (a technique I used once in Sri Lanka, where the taxi driver had a serious death wish).

We did make a quick stop at a high viewpoint to see the Rock of Gibraltar in Algeciras, with the mountains of north Africa just on the horizon. Algeciras was founded in 713 AD by the Moors, probably over an earlier Roman town. The Rock of Gibraltar, 426 meters in height, is actually part of the United Kingdom. Most of the top of it is a nature reserve, home to Europe's only wild monkeys, Barbary Macaques. 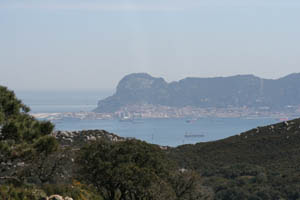 More stories and photos at: www.endurance.net/merri
Posted by The Equestrian Vagabond at 2:12 AM