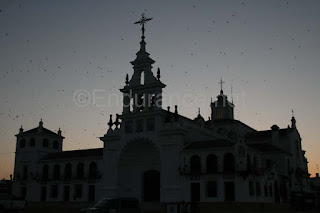 Leaving El Rocío in the dawn... 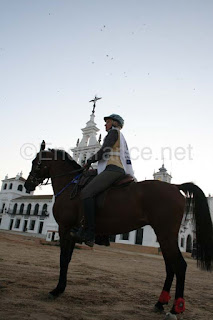 ...trails through pine trees into Parque Nacional de Doñana, one of Europe's most important wetland reserves. 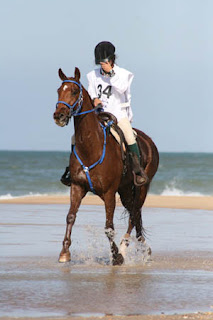 Doñana is formed by the delta of the great Guadalquivir river. Unlike most deltas, this one has only one outlet at Sanlucar de Barrameda (today's destination), and a great windbreak sandbar on one side of it, allowing the natural creation of dunes and marshlands - which kept centuries of invading people uninterested in it, and allowed wildlife to thrive here. It is still a major reserve for migrating birds. Access is very limited - our vehicles would be unable to follow the entire trail to the beach, and only official ride cars were allowed on the beach, with buses shuttling crew to the final vet gate. 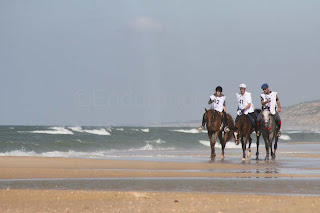 That meant us, and after a vet gate at Matalascañas on the beach, we rocketed off down the beach, ... and I mean Rocketed Off. Our tires may have left the earth at times. I think the speedometer arrow shot off its rotator. Nacho truly took devilish delight in skillfully swerving, sliding, bogging, and skimming along, aiming for the birds in hub-deep ocean, inundating the car once with water that poured through an open window. I learned some new Spanish words today in attempted conversation with Nacho and Luís and Carmen, although I think "AHHHH!" is pronounced the same in Spanish as in English. Later, at the finish vet gate, someone found Nacho a leather helmet with devil horns - perfectly suited to his driving and his impish grin! 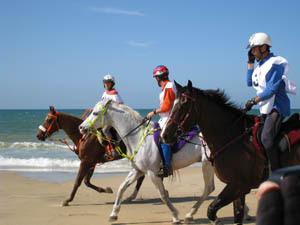 It was a beautiful quiet 30-km stretch of beach to Sanlucar de Barrameda. Some riders stayed out of the water, where the sand tended to become a little soft; some riders stayed just in the shallow water, where the sand was harder packed and the going a little easier. The beach was littered with beautiful shells of all colors under the sun - good thing I don't collect shells because I would have gone mad. And my suitcase is already too heavy. I did take pick up a little shell, however, for the Raven.

After the official finish of the ride, horses loaded on a car ferry 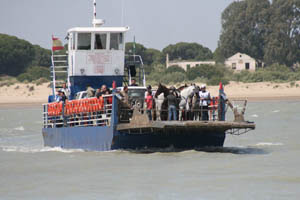 to cross to Sanlucar de Barrameda, 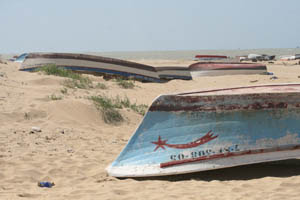 and had a final gallop along the beach for show, along a 1500m stretch of sand that is Spain's oldest racecourse, dating back to 1845, where every summer horses still gather on weekends for races along the beach just before sunset. 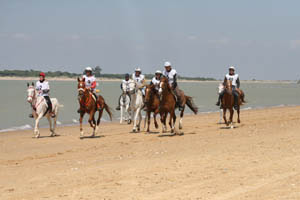 There a gypsy woman serving manzanilla sherry, a specialty of the area, awaited people.

Dinner, hotel, skipped the party at the Bodega, little sleep... a pattern of Al-Andalus.

www.endurance.net/merri
Posted by The Equestrian Vagabond at 2:57 AM