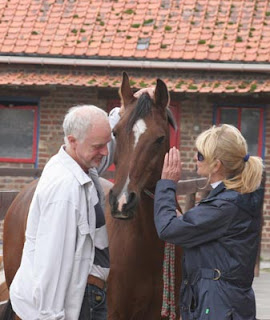 It's Maddy's 70th birthday party. Everyone is asked to step outside. Out of the darkness is led a dark horse, wearing a white blanket and a sash from a World Endurance Championship. Maddy starts crying. The man leading the horse starts crying. Everybody is crying.

Leonard Liesens needed an endurance horse to ride. He needed to get into shape to ride the Tevis in America, and his endurance mare at home in Belgium was pregnant. He started searching advertisements and local barns. Someone directed him to a horse at a stable. There was just one thing about this horse - he was known as 'The horse who killed his rider.' He'd returned to his stable one day without his rider, who was later found out on the trail, dead. Nobody knows for sure what happened.

Leo went to look at the horse.

"I thought he looked like a nice horse, so I told the widow I'd buy him." She asked Leo if he didn't want to ride the horse first, and Leo said okay. He got a saddle from the barn, tacked the horse up and mounted. The horse started bucking - and threw Leo to the ground. Leo got up and climbed back on. The horse bucked and threw him off again. Leo got up and mounted him again, "this time very carefully. I gently asked him to walk around, asked for a little trot, a little canter" - and the horse let him stay on his back. Leo bought him, for $2000 Euros.

And that's how Orfeo des Iviers, top endurance horse, 2000 Belgian Champion, came into Leonard Liesens' life and to the sport of endurance.

It was just the beginning for a horse that was new to endurance, and for a rider who - besides finishing the Tevis Cup the previous year on one of Steph Teeter's horses, and a couple of other rides - was an endurance newbie himself. "I don't know how it is we ended up together. I was very lucky to get this horse. I made some mistakes with him, I learned along the way," Leo says... but Orfeo still had a remarkable career.

In all of it, Orfeo wasn't an easy horse to ride; "he had a temper" if you pushed his buttons wrong. And he kicked just about everybody that ever crewed for him. "When he was focused on racing, he didn't like his legs touched unless he knew you were there. He was very competitive, but you could rate him. He had a very light, very smooth canter, and he could keep it up all day." One of their training spots was a beach where they in fact spent hours cantering, for 60 kilometers at a time, up and down the sand.

Another place Leo and Orfeo trained, besides the forest near their home, was in the forest not very far from Brussels. Orfeo would sometimes board at a riding stable on the edge of the forest, and Leo could slip out for a long lunch and condition his horse. It was there where Maddy met Orfeo.

Maddy owned a Newfoundland pony and a 28-year-old Thoroughbred, but she also had her eyes on Orfeo.

Two things happened: at 21 years of age, Orfeo finished a 120 km ride in Euston Park, after being pulled in his previous 3 rides in 2006, 2007 and 2009. There were apparently some grumblings in some endurance corners about Leo riding such an old horse in endurance, wondering when the poor old nag would be retired. "But what do you do with a horse like this?" Leo said. "If you stop riding him he will lose his mind! He can't just stand around in a paddock! You have to give him a job!"

The other thing that happened was that Leo took Maddy out for a ride in the forest. Leo rode another of his horses. Maddy rode Orfeo.

I know where they rode, and I know what happened. I did the same thing three years ago - on the same horse. There's a racetrack in the forest there, where you can train your racehorses over a groomed dirt oval if you like. It's the best place to canter a horse for miles - a horse with a canter like the smoothest silk, a horse that gives you confidence, that doesn't pull on you, a horse that can keep it up smoothly and easily, smiling along with you every stride.

Maddy was overwhelmed with her ride on Orfeo. "She told me, over and over, 'Thank you Leo! Oh thank you! Thank you!'" And after that, she started bugging Leo to sell Orfeo to her.

And one day, Leo made the decision that he knew was right.

To this day, 8 months later, Maddy still can't describe the night of her birthday party, when Leo surprised her with this beloved horse as a gift. The words still don't come out of her mouth - she can only mime the speechlessness and tears that flowed. "And she almost fell down!" Leo says.

And when Maddy leads her Orfeo out of the stable for us, she hugs him and talks to him, cries to us, "Mon amour! Mon amour!" When she turns Orfeo out in a paddock for us all to see, he bolts away, tail in the air, prancing, floating over the grass. He stops to look back at Maddy - who's speaking in French to him the entire time - to make sure it's okay to keep going, and he does. He turns and leaps away again, floating airs above the ground, kissing the earth on tiptoes light as a feather, snapping those fetlocks out in that magical floating trot that you see in the dressage arena. Orfeo is positively showing off for us, letting us all know that at the ripe old age of 21, he's still got what it takes. 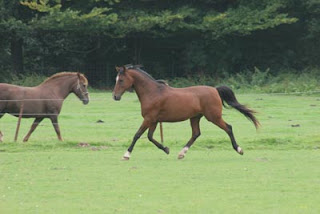 She calls Ofreo back, and he comes up to her 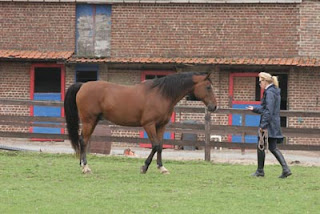 and stands, accepting the hugs and kisses (and, almost, tears again) with dignity, 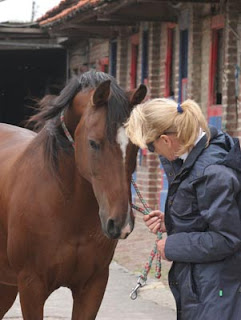 clearly enjoying behing adored by the woman who positively idolizes him. He's clearly settled well into his new job in life, of taking Maddy for easy rides in the forest, and being worshipped. 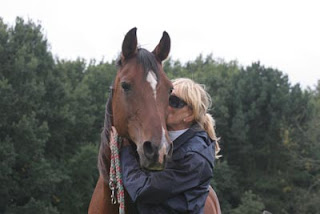 "It made me feel good to do this. I knew it was right," Leo says. "Maddy is happy, I am happy, Orfeo is happy."

Posted by The Equestrian Vagabond at 12:46 PM