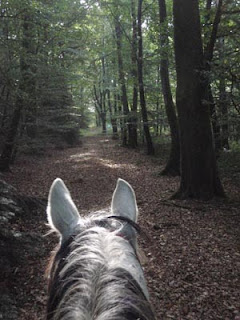 I know about 10 words in French, three of which might come in handy at some point: I am lost. (Coincidentally, I learned 'perdu' is French for 'lost' - at Seren Arabians in England last week, since they named a colt Seren Perdaius.)

Nicky hauls me and Dougal a couple of miles from home and drops us off. 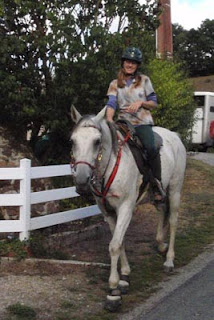 She points the general direction home - through a forest, over a forested ridge, down in the other little valley, and toward the village of Gesvres. Other than Gesvres, the closest I can describe my location, if I must, is 'northwest France.'

And Nicky leaves us, saying, "Dougal knows the way home." 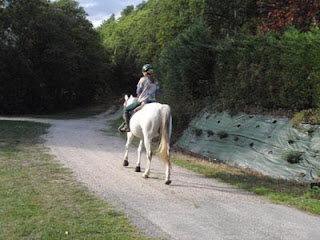 We start out riding along a two track beside a pasture of cows, who turn to follow us, and Dougal trots to leave them behind. We come to a split in the road. Both have old signs that say La Propriété Privée and both lead into the forest - but there is nowhere else to go.

Dougal chooses the right fork. it is little used, a narrow single lane covered with leaves - and it is a Bridlepath. Some of the trees have two horizontal pink stripes, and the number 5.

I thought I could rely on the compass in my head, because it works fairly well when I pay attention to my surroundings - but this is the forest, where you can't see far through the trees, and our track has been gradually curving - but I can't tell how much. There are now dark clouds above so there is no sunlight with which to determine the direction, and I soon lose all sense of orientation.

But Dougal moves forward without hesitation. He turns at some forks in the trail, goes straight past others. Sometimes we are following pink striped tree trunks; sometimes we are not on bridlepaths at all.

At one junction - when I am sure we are heading straight towards home, Dougal turns away on a path to the right. I feel as if we are going opposite of where we should be going but Dougal is sure of where he is going. I don't try to put my two cents worth in. He picks up a canter, and we float along swiftly through the forest, his bare feet falling softly on the grassy track. Perhaps we are getting further away from home, and he just likes to canter this stretch. Perhaps we are heading straight toward our village. I have no idea.

The forest is mostly silent - birds are rare and there's no sign of anything or anyone else. We zig then zag, follow a curving track, make a few more turns. Dougal saunters along, snacking on chestnut leaves as we go along.

And then we emerge onto another small road - and I recognize where we are - at a paddock where Dougal has spent time babysitting a couple of young colts. I know the way home now.

Je ne suis pas perdu - I am not lost! 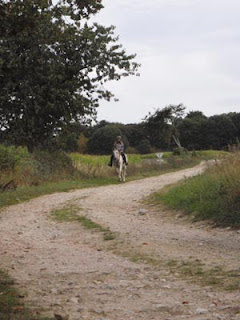 Posted by The Equestrian Vagabond at 12:50 PM