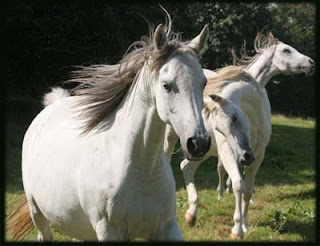 Even when he was a teenager, Allan Leon knew exactly what he wanted to do. "He was completely focused on endurance, something it was somewhat 'unfashionable' for a teen to get into," says Nicky Freud, fellow endurance rider and trainer. "He was a good rider, and he could have gone into eventing or show jumping, something with a bit more glamour in it, but he was totally set on endurance."

At 31 he's still young, but don't let his tender age fool you. Allan is still passionate about endurance, and he has learned quite a lot about what he's doing through hard work and dedication. 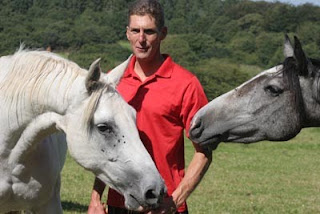 Les Ecuries du Roc'h ('Rocky Stables') are the endurance and sport horse stables owned by Allan Leon and his parents Christian and Sylvie, located in Brittany in the northwest of France.

If you can catch Allan between riding out on his endurance horses, he'll be happy to show you around. "I started out riding when I was 9, for pleasure," he says. It wasn't until several years later that he discovered endurance and did his first endurance ride.

His first horse was not an Arabian. The French Trotter Falpasse du Vivier took Allan on 7 seasons of endurance rides, and in their 29 rides together, they had only one elimination. As Allan's riding experience grew, so did his knowledge. He did an internship in England with a jumping and racing trainer of Thoroughbreds; he worked in the south of France at an endurance stable; he worked as a rider in Dubai for a season; he advised and assisted the Malaysian team - including the King of Malaysia - in Europe in 2006, and in Malaysia in the pre-ride for the Malayasian World Endurance Championship in 2008.

In his work and travels he met the Bahraini endurance team; they gave him a couple of horses from the Royal Stables to train, and he did well enough for them that he was given some more. Now he trains around 10 for them at any one time, one of 3 French trainers to do be doing so. 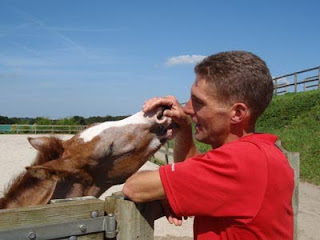 Les Ecuries du Roc'h is tidy, unpretentious, comfortable, and practical - a barn with a half-dozen stalls and shower-solarium, numerous big paddocks, outdoor arena, and a walking machine. Even riding out 3 horses a day, and with 2 other riders helping him, with all the horses Allan has to train, the walker has become invaluable in his training program, like many of the top trainers around the world have put to use. "Without this walker, I would not be able to train all these horses!"

Allan now has 22-25 horses in full time training (less than a dozen of his own - the rest are for clients) - and about 25 others for breeding, or growing up before they begin their training. The horses in his spacious paddocks (from France, Australia, Bahrain, England, etc) look well-fed and well cared for. Any horse overridden or injured in a ride he'll say to the owner "talk to me in a year" - and the owners will defer to him.

He knows his stuff - he qualifies horses starting at the 20 km distance and he trains horses up to the 160 km distance; he can advise one on what to look for in an endurance horse as to best size, conformation, and breeding.

He has a great sense of humor and he isn't particularly reverent about anybody, because he is confident in what he is doing - and his record speaks for itself. And - if you do factor in his tender age - you'll see he's got a whole lifetime of endurance ahead of him. 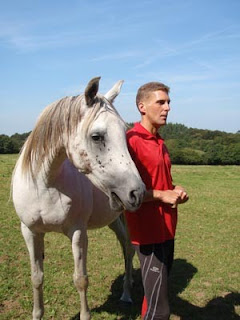 Posted by The Equestrian Vagabond at 12:17 PM