I Get By With A Little (Tevis) Help From My Friends 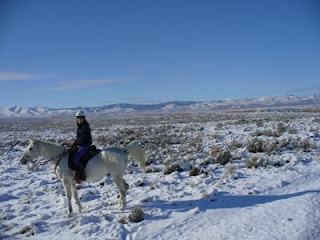 Try as I might to find some definitive sign that I should or should not do Tevis, nothing happened.

There was no lightning bolt from the sky (that would have just ended it), no FEATHER from one of the SIX Ravens that landed in our tree Tuesday morning (I would have packed up and left for Tevis within the hour!), no chasm that opened up under my feet, no deep VOG (Voice of God, for those who've worked in theatre) from the great void saying, "Ride, silly!"

I DID hear a lot of friends' voices; and none of the cautionary woes - my bad aversion to HEAT, my bad knee - that I mentioned made a dent in their enthusiasm.

"If your knee gets to hurting too bad, just have a horse step on your foot. Then you won't notice the knee anymore, or at least not as much. Once enough things start to hurt, you just keep on going. It's only for 24 hours, you can handle it." - from Someone who rode with broken ribs.

"DO IT. Don't miss it - it's THE MOST BEAUTIFUL RIDE EVER" - from a dirty old man with a knee problem.

"You were gonna buy the Cool vest ANYway" - from a fellow heat-challenged (photo) shooter.

"When you crest the top after High Camp, and see the mountains out ahead of you, THEN you will know why you said yes to the adventure." - Jonni in Texas

"You will want to die the next morning, but it will be oh-so-worth-it!!" - Amanda in idaho

And more advice: wear a Cool Vest (someone is loaning me one), Cool Bandana (hey, I'm already wearing one in Oreana to try to cool down!), a Cool helmet liner. Stay hydrated. Keep damp. Take LOTS of good drugs (like anti-inflamatories) for the knee. Ride vet check to vet check, or just around the next bend, or just to the top of the next hill. Step by step.

And many, many email and phone best wishes and hugs and kisses.

Unanimously, the response was: GO FOR IT!

But in the end, it was Jose that led me up the rim trail Tuesday morning (had an awesome ride on him), my guru Kevin who pushed me to the edge of the precipice Tuesday noon (talked to him on the phone for advice), and my hero Julie Suhr that kicked me over the top Tuesday afternoon (she answered my email). Julie's words of encouragement brought tears to my eyes, including the final "And you can do it, Merri. I'll cheer for you at the finish line..."

Of course I said YES!

I'm lucky because I haven't had 2 weeks or 2 months to worry about the horse (he's all ready, and Nance and Bruce are already on their way to Robie Park), I've stopped reading about the trail (don't need to start fretting about steep drop-offs), I'm just ignoring my knee, and I'm not thinking about the heat.

I'm just going to go ride - back in the Sierra Nevada mountains that I've been craving - and have fun!

Thanks everybody - see you all at the finish! 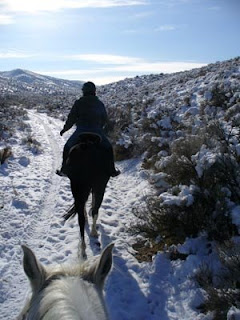 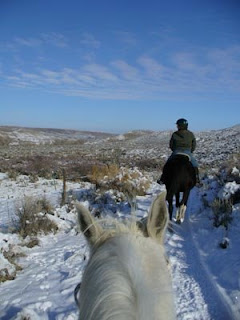 Posted by The Equestrian Vagabond at 6:10 AM