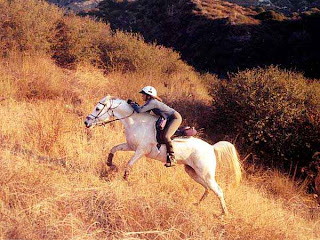 It might sound like a list for a Tevis rider, or a crew-member. But it's for Tevis photographer Lynne Glazer. Lynne's been photographing Tevis since 1998, when she started with the webcast. She's been shooting Tevis on her own since 2004, for herself and various magazines.

There's a lot of planning that goes into a major event like this, starting with studying what worked and what didn't last year. One has to figure out how to get to which places by what times and who to shoot (all the riders? the front runners? leave one place to time it to get to the next place to catch front runners or mid-pack riders?), determine the best lighting and angle at the particular time of day the riders will be passing (harsh sunlight and shadows and forest can be particularly tricky; and dust from the trail is murder on camera gear); and figure out how much equipment to carry and how to carry it all.

Besides figuring out all of the technical stuff, there's the physical effort of GETTING to those out-of-the-way places - she gets to hike a couple thousand feet in and out of hot, still canyons, just like the horses. And hiking there means carrying all the gear - cameras, lenses, back up cameras and lenses, and water, and if she's going somewhere like the swinging bridge, extra clothing such as wading boots. And those aren't light.

There's never really a time to pause to eat or rest from before the start (sometimes she'll start hiking at 4:15 AM) till the last rider has crossed the finish line near 5 AM - and not even then, because there's your booth to man, and the awards to shoot.

It's not a job for wimps or the non-motivated.

Lynne doesn't just shoot endurance - she's rides endurance also. She grew up in Sacramento - just down the road from Auburn - "the Endurance Capital of the World" where she spent time hanging around and riding the Tevis trail. She started endurance in 1996, and though she hasn't done a ride since 2006 (because of a knee problem, which is better now), there's more in the future, including a stab at Tevis. "Sure, I'd like to ride it one day, on my own horse."

This year, among other places, she'll be down by the Swinging Bridge catching me as I come across it (gods willing!). Next time maybe it will be me behind the lens catching Lynne the first time she rides across it in Tevis. : )
Posted by The Equestrian Vagabond at 12:23 PM