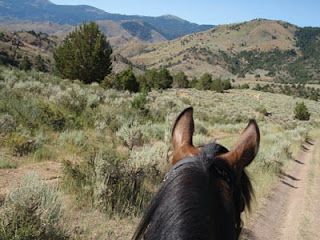 As Karen B said in her Summer Heat Horse Tales blog, "The weather has been HOT but the riding goes on." The riding does go on, and there's a little treasure out in the Owyhees mountains if you can brave the heat and your horse can endure the effort in getting there.

There's been little variation in the weather the last few weeks except for the digit after the 9: 92, 95, 98, 99. The NOAH forecast just shows a big blazing orange disk in the sky.

But, if others can put up with your whinefest (i.e., if they can put up with my whining), there's nothing like a new trail to make one (me) forget temporarily about the hardships of riding in the summer desert heat. 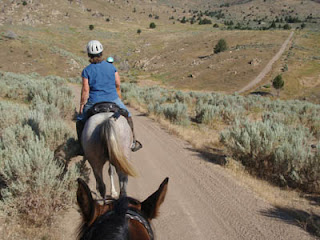 Carol and I hauled two of her horses up the road toward Silver City early in the morning and met Karen S for a change of scenery. We'd been talking of a ride all the way up to Silver City, but it really is too hot for that right now. (How about in the fall, or better yet, the winter when it's 60 degrees cooler!?)

Instead, we did a loop that took us over part of a trail we will one day take to Silver City - an old mining ghost town in the Owyhee mountains that was once one of the leading producers of silver back in the 1860's. Silver City is in the National Register of Historic Places; you can still stay in the original Idaho Hotel, originally built in 1863.

Our rutted 2-track dirt road led us into Diamond Basin, 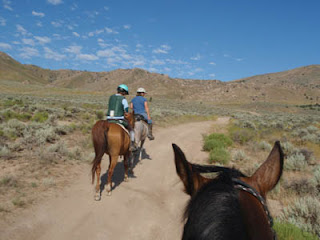 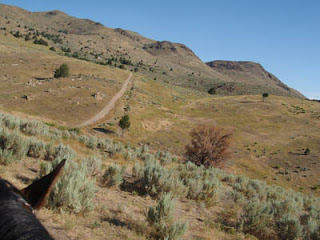 The expansion of the view was proportional to the angle of the ascent (some kind of mathematical formula I've forgotten from school).

My mount Cinco and Carol's mount Suz aren't fit yet, so they were feeling the climb. We had to stop where it started getting really steep and catch our breaths in the shade; and then they staggered up the final steepest 40 yards. It was possibly the biggest hills these former arena horses had ever seen. Karen was riding her fit endurance horse Gil, and even he was thinking this was a rather amazing horizontally-challenged road, or else he was empathizing with our two wobbling sweatballs.

What was REALLY amazing was that someone in a pickup had driven up this road at some point, someone with stronger nerves of steel than me, which we could tell by the fact that their camper shell had fallen off and was over the edge of the road and planted in the dirt on the steep drop-off. Do you think they didn't notice that it fell off their truck? 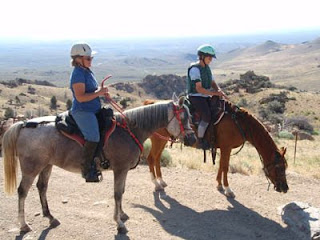 We rode over the top to Milk Springs, and down to Tiddie Springs (really, that's the name) and the North Fork of Sinker Creek. Way down in the valley far below, Sinker Creek is the creek we cross at the Joyce Ranch on some of the Owyhee endurance rides.

The dirt road along this upper part of North Sinker wove through a juniper forest, and crossed the creek at an old homestead cabin. 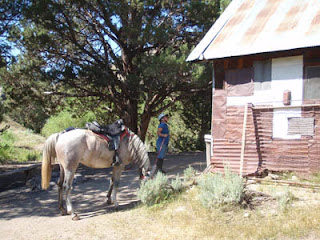 A handwritten note on the door 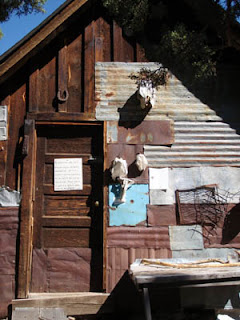 says: "To anyone that stops here. This was originally the Montini's homestead cabin. It is still used as a cow camp occasionally. If you want to stay here you are welcome. Please leave it as good as you found it. Please close the door. Thank you! - Joyce Livestock Co."

Nice or what? The door was unlocked; inside was a little food and some water jugs, a little pile of firewood for the stove, and a cot. 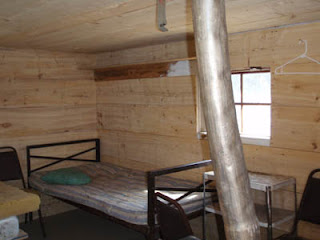 And a guest book to sign. Outside was a campfire ring (some litter in there :> : ( - next time I'll bring a pack to haul it out) under a big cool juniper, an outhouse, and a corral for horses. Oh, all kinds of ideas were popping into my head.

But today we left the cool oasis, and made a loop back to the high point we'd crossed. 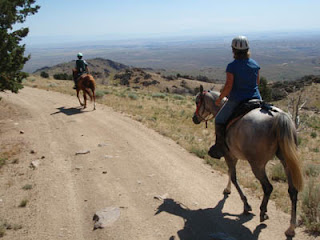 Then we walked on foot back down the steep section, and continued back on down, down, down, to the heated valley floor. 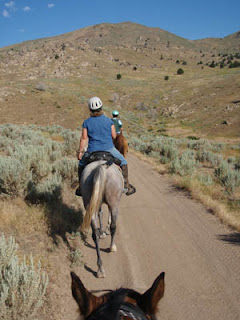 Not much of a breeze anymore, and the mercury was climbing. The water in my bottles in my pack was getting near boiling - didn't taste too good or do too much quenching going down my throat, and it didn't cool me off too much when I poured it all over my head, but it was still a good thing to have.

The horses were happy to get back to the trailer, and we loaded up and got the heck outta Diamond Basin before we started to cook.

It is a good way to beat the heat in the Owyhees: ride early, discover new treasures where you are welcome. Next time I'll remember to freeze my water bottles overnight. 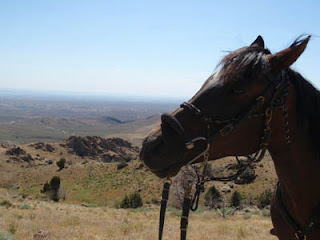 Posted by The Equestrian Vagabond at 5:46 PM