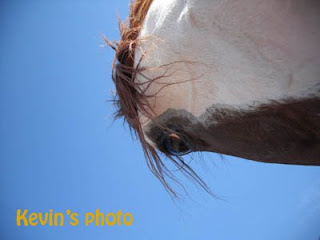 That was after Kevin Myers' second trail ride on his new 8-year-old gelding Auli Farwk (Far), that he bought from Leslie Spitzer.

May 29 2007: Kevin came home from work to a catastrophic injury. Far was digging under some roots of an old Palo Verde tree in his paddock, and ripped his fetlock open on some exposed roots. He severed his flexor tendon, requiring 94 stitches in 3 layers in 2 hours of emergency vet work. Only a few trail rides on this wonderful horse - and it all might be over.

Far spent the next couple of months in a stall in the sweltering heat of summer in Scottsdale - willing and agreeable to everything that was done to him to help him heal.

After a steady healing, and a careful, patient rehab, Kevin and Far did their first endurance ride in October of 2007, 5 months after his injury. Far is 15 for 15 now; he and Kevin did Far's first 100 in this year's April Git R Done ride, finishing 8th.

"Tevis wasn't even in my plans 2 months ago, but the last 6-8 weeks we've been hauling up to the hills outside of Prescott - to get out of the 115* heat in Scottsdale - and doing hills - lots of hills. 30 miles, and 11,000' of climbing. He's just done so spectacularly, and I'm enjoying him so much - that Tevis called."

Kevin rode in and completed his first Tevis in 2007 on Clydea and Jim Hastie's horse Muscaczar. Now he's back for his second go at it. "I've been thinking about it - and I don't know why I'm drawn to go back. It's just... the Ultimate. The trail sure makes you feel alive out there.

"Maybe I'm doing it again because I'm in awe of my horse. He's an exceptional athlete; I think he's my Once in a Lifetime Horse. I have an incredible connection with him - it's trippy!"

Far is pure CMK Arabian, although Kevin calls him his CRF horse - Crazy Running Fool. Far likes to go. Always wanting to go, always asking for more, he can be a little hard to rate at times.

Now that he's done one Tevis already, Kevin is a bit nervous and excited, and has confessed to losing a little sleep over it. And there are two things he's concerned with. One is the start (which, naturally, is the concern of a lot of riders) - Far tends to get excited at the start of rides. And there will be close to 200 horses starting on the trail. The second is Kevin's body. "Far doesn't have the smoothest trot - he has a lot of loft - so my body's going to wear down at some point."

But Kevin will hold up, and he has all the confidence in the world in this horse that has come a long way from a career-threatening severed flexor tendon two years ago.

"The Great Challenge of Tevis calls" - on the Horse of a Lifetime. 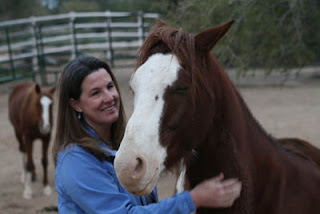 Far having a romp 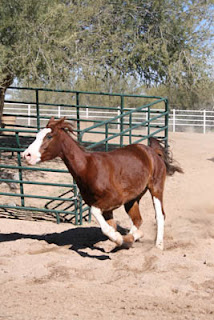 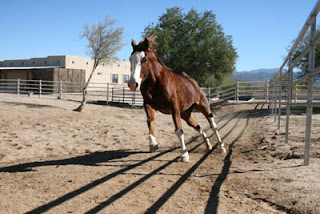 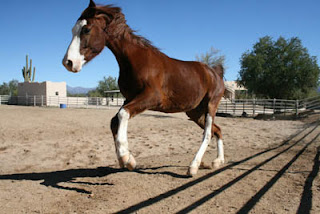 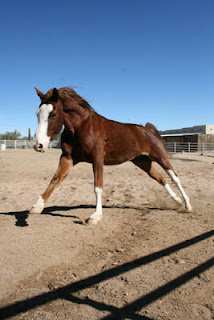 Posted by The Equestrian Vagabond at 5:31 PM