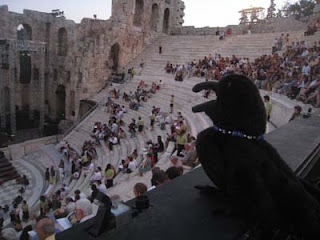 We sound people do have the stage from 3 PM until then for sound, and we use all of that, getting the last choir microphones in place, dressing the cables, checking the channels on the board. We run through all of the wireless microphones again, and the band comes in at 6:00 for a thorough sound check - as thorough as we can get at the last minutes. The sound system is rocking, it really sounds good in there, crisp and clean. Then one by one the speakers and singers take their turns on their microphones. So far, everything is working, everything sounds good, though we just haven't had enough time to find all the problems that can happen. The choir gets on stage in their positions, and belts out a song. They sound magnificent!

The stage is cleared and the house opens at 8 PM, and people begin to trickle in. Andreas and I stay up by the sound board... and wait. Nothing to do but wait now. I always get a little nervous at the first preview of the show - my only shot to get things right: am I going to hit all the cues right? Are all the microphones going to work? (One show in Russia, seven, count them, SEVEN microphones got turned off at the top of Act 2) And then the next night, Opening Night, I am fine. But I haven't had a real preview. This is it. But so far tonight, I'm not nervous. And if anything goes wrong, Andreas is right beside me wearing a headset to communicate with the sound guys on stage. Ron will be there too; I'll be mainly working with the vocals, and he'll be mixing the band (guitar, bass, drums, piano, organ).

I'm not superstitious or anything, but the Raven (who is good luck himself) is wearing a necklace made of the blue eye beads prevalent here to ward off the Evil Eye. Doesn't hurt.

Backstage, Reverend Earl says a prayer with everybody in a circle... "God has blessed us again to come together... ("Yes, yes!")... And through the YEARS! - it's been a long time now... ("Yes, yes!") ... I pray that Everybody will be blessed; but not only that, I pray that Somebody will be saved. Thank you for the opportunity again." Amen!

The theatre starts filling. It's not sold out (there were rumors), but there's a good crowd here. Usually when we do a week run somewhere, by the end of the week the show is packed because the word gets out. Here, it's only one shot, so if word gets around - and it will - it's too late.

At "5 minutes to places," I'm checking the microphones via my headphones, one by one. At "Places, please," okay, I'm a little nervous. All of my mics sound like they are working, but then with sound, you never really know for sure until you bring the mic up and the actor speaks on stage.

The lights dim... the show begins. Ohmigod, this is it. Butch comes onto stage and sits down at his organ - this is my first bundle of nerves - and starts playing... and, yes! The organ is coming out of the speakers. That means that yes, the sound system board and house speakers are really working. So far so good. The choir members in their bright colored choir robes begin coming in the house, moving to the stage; the actors, singers move onto the stage, greeting each other and the audience as if they were part of the congregation of the church. Then Reverend Earl enters - this is where my second bundle of nerves attacks... I bring up his microphone, and...

"Think no longer that you are in command here."

"But rather think how when you were, you served your own destruction. Good evening, and welcome brothers and sisters..."

Okay, my nerves are gone for the evening. So far things are working and I just have to remember all the cues in the show, but that's on autopilot now.

And The Gospel at Colonus goes on, brilliantly. I think the show has never sounded better, and I don't know that it's ever been performed better. Jimmy is exceptional his first time as Oedipus tonight, as is Ben Moore - his first time to do the show. Everybody is just brilliant. The music is deeply moving, the harmonies spot on. Half the cast was in tears on the stage during half the show - but they were still able to sing gloriously. By the end of the show, the entire audience is up on their feet, dancing and clapping with the singers on stage - none of them want it to end and none of them want to sit down.

My only regret is that I never really see the show. I'm concentrating so hard on the sound - I don't really see anything other than the sound. Which is a shame, because Jason's lights and the video projections on the old stone walls are terrific. 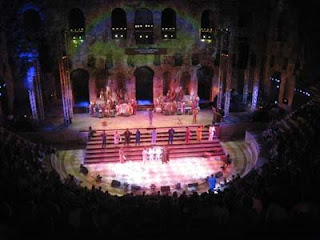 For over two thousand four hundred years the Acropolis has stood sentinel over the thousands of plays in the theatres beneath it, as actors and singers have entertained, educated, provoked and moved crowds - rage, joy, enlightenment, love, dispair. Tonight we took our place in this honored and honorable procession.

We were afraid we might offend the Greeks with our interpretation of their play. I don't think we did. Many Greeks in the audience were in tears at the end of the show. "Showers of joy," said one patron. While the cast was in tears during much of the show, I was too, at the end, clapping for it all - Colonus, Athens, my friends, my family with such talent and power to move people, my being blessed at being a part of this.

"Now let the weeping cease - let no one mourn again - for these things are in the hands of God."

We didn't bring down the Acropolis, but its stones and its Gods will remember us. 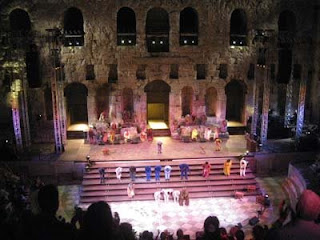 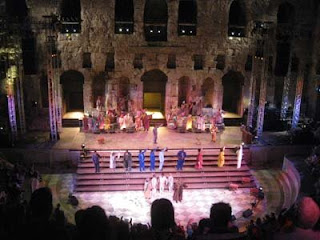 Posted by The Equestrian Vagabond at 2:13 PM