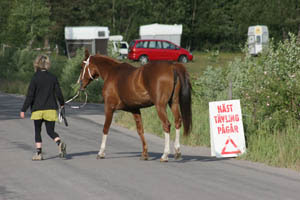 My first afternoon in Växjö, I immediately got a taste of the "typical Swedish summer": clouds, showers, sun, changing every 15 minutes. It gets cool enough for a jacket, then warm enough to take it off, every 15 minutes. Then, there were the GNOTS. Or, gnats, as we call them, and nasty buggers they were. Persistent, vicious, and lots of them, biting anything they could get their snouts on. "They just came out!" Michael swore. "We haven't had any all summer until just now. They will be gone in a few days." Magnus was prepared with bug juice and we all took turns running to him in desperation and borrowing it.

The gnots would stick around for ride day, though it was only in the forest at a few of the crew points, that they really attacked us. Mercifully, they were absent at Bergunda where all the Vet Gates and Finish would be.

The Ingelstad stables are on the grounds of an agricultural school at which Yvonne teaches classes on endurance riding. Vet inspections began in a field by the stabling barns at 5 PM for the 160 km and 120 km horses, followed by a ride meeting with the veterinarians and ride organizers. 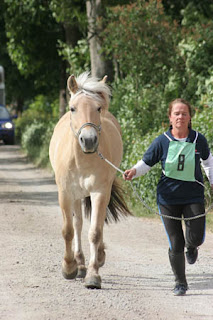 One of the horses that stood out at the inspections - and how could she not - was Norwegian Olaug Carstensen's Nelly av Espeli. It's a Norwegian fjord, one of only two I saw at the ride, and the only one in the 160 km. Maybe not exactly the breed of horse you expect to see doing 160's, but, "You wait," said Alam. "That horse will still be going at the end." Olaug won the Nordic-Baltic Championships in Finland 3 weeks ago, and she will be putting on the Sør-Vest Rittet (South West Ride) in Gyland, Norway in September, which will be the pre-ride for next year's Nordic-Baltic Championships.

Jessica Homberg would be riding Princess Millenia in the 160 km; she was second by a nose in the Nordic-Baltic Championships, coming on at the very last seconds and just missing the win.

Third in the same Nordic-Baltic Championships was Norwegian Ellen Suhr on her gelding Elcapero. Endurance riders in Europe tend to drive long distances for rides, and perhaps the Driving Prize for this Dackeritten ride goes to the Suhrs, for coming 2300 miles. While they do have stables now near Oslo, Andalouisa and Sven live in the north of Norway, about as close to the Arctic Circle as you can get. And they go to a lot of rides to crew for their daughter - apparently they just get used to all the driving.

The vets and organizers moved to the stables at Bergunda, where the vetting in of the 80 km and 50 km rides began. Riders and crews set up crewing spaces in the vetting arena, and rest areas in the yellow field behind the vet ring, getting everything ready for the morning.

Back home, the chores don't stop; horses still had to be put in stables and fed, kids put to bed, and another meal cooked for a house full of guests again. Yvonne never seems to stop, or get tired.

It wasn't completely dark yet when I crawled in bed by 11 PM, so at least it felt like I'd be getting a good, long, night's sleep. 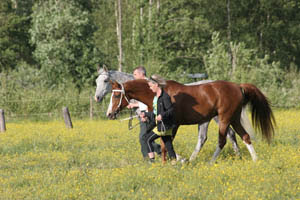 Posted by The Equestrian Vagabond at 2:51 AM