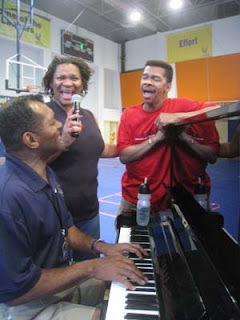 A rehearsal space has been rented - a gym that is 45 minutes away. It is too hot in the outdoor theatre during the day to rehearse the show, and besides, every spare moment there is taken up with setting up and testing lighting and sound gear.

The most important thing for me as the sound mixer is to re-learn the show (with the new singer Ben, and with Jimmy taking the lead as Oedipus, and, every time we do the show, it changes a little bit), so I go along with the cast to the rehearsal space in a special bus.

Even though the acoustics in the gym are terrible, oh my lord the SOUND those singers make in there! It bounces around and shakes the rafters, and of course I run around on 'stage' and put my ears right in front of everybody who sings - 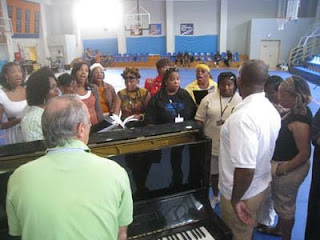 the Abyssinian choir (20 voices - LORDY!), the Steeles, the Blind Boys, the Soul Stirrers - I get waves and waves of huge goose bumps all afternoon. Even Bern has goosebumps - "Ohmigod! Ohmigod! Somebody's going to have to hold me down at the theatre because I'm just going to run around screaming! We're going to bring down the walls of the Acropolis!" 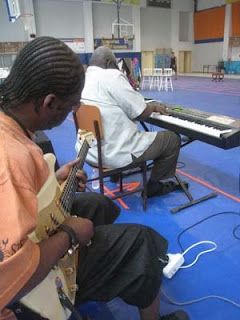 During the 10-minute breaks, composer Bob on the piano and drummer Leroy start jamming. 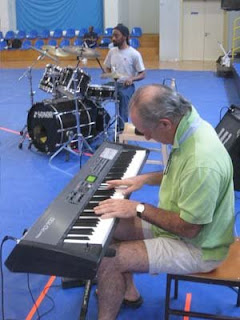 Everybody grooves to it and wants the breaks to continue. Stage manager Babette announces, "We are back, everybody," and the guys keep jamming. If Joey's on his guitar and Ben's on his bass, they will sometimes join in and play along too, and they could all play for days, improvising as they go along. They can even hold a conversation while they are playing. How can they do that?? It's just in their bones. They compose pieces of terrific aural art, notes, phrases, tunes, created in an instant, existing for the moment, and then they are gone, never to be heard or re-created the same way again, and I am lucky to be right there to hear them. These people just blow me away. And it's not just me and Bern who feel the magic and force behind the music - everybody is running around like giddy groupies with their cameras taking pictures of everybody.

When Ben Moore sings his verse of Lift Me Up, it blows your hat off your head. Then for the first time, Jimmy sings all of A Voice Foretold in the lead roll, with Jevetta and with the other Blind Boys as backup. Everybody gets goosebumps during and after the song, and it's such a stunning rendition, and dead on the first time, that afterwards people are high fiving each other and laughing - I mean, what else can you do but laugh, that you get to be here with your family for this. It almost brings me to tears - and this is just for practice, in a smelly basketball gym! Bern says, "I hope I don't start bawling during the show, because I can't sing when I cry!" And the show gets so emotional, that she does cry every time. But this one is in Greece!

We limp through the first act - it's impossible to re-create a 3-dimensional stage on a 1-dimensional gym floor. Jimmy will have to be negotiating steps by himself (everybody is terrified he will fall), and Lee is desperate to get the cast on stage for a real rehearsal. There's a special dinner for everybody at the Ambassador's residence tonight at 8:30 PM, which can't be blown off; then the day would have been over. But that all gets changed.

The cast will go to the dinner, then come to the theatre for a rehearsal starting at 11 PM until 3 AM, with the band coming in for a partial sound check at 10:30 PM. The schedule sounds dreadful, but it has to be done, because we simply have no other time to do this. The run-through won't help me much, because all our sound equipment won't be ready, and besides, there is a midnight curfew on loud music, festival or no. I can only watch the rehearsal, and mix in my head.

I skip the fancy reception and instead go back to work at the theatre as soon as the bus brings us all back to the hotel. I grab a stale sandwich from a little stand outside the theatre, and that has to do me till tomorrow's breakfast. The cast comes in from their soiree with the Ambassador. They all got goodie bags, like Goodie bags the Oscar attendees get. Hmmm. Well, I don't wear perfume anyway. I look in Butch's bag to see if he brought an extra sandwich along, but he said there were only hors d'oeuvres at the party. 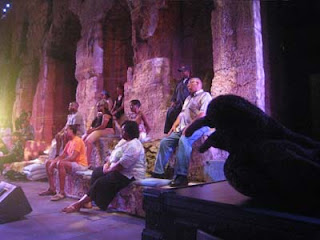 The actors get through the play, with little chances to do many things a second time. Jason is not finished writing all the light cues. We're still days away from having all the sound equipment in place (or even at the theatre) and working correctly.

I still don't see how all this is going to come together in less than 40 hours. You have a lot of control over art, but sometimes you have no choice with technology - especially when you just don't have time to work with it. This has to be a perfect show, but I just don't see how that is going to happen.
Posted by The Equestrian Vagabond at 11:53 AM