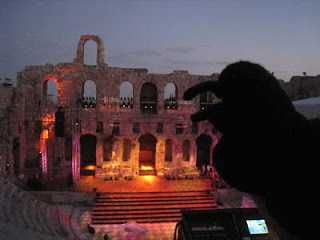 OMGOMGOMGOMGOMG: That was the subject of my email to actress/singer Bernardine in April when it was definite we were coming to Athens with our Gospel at Colonus show. 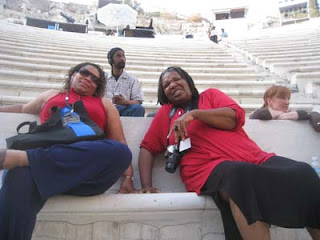 All of the actors/singers walk around the stage and theatre for the first time, as if in a daze, everybody taking pictures. I don't think anybody can believe we are really here. Lee the director walks a few of them through some of the blocking on stage and has the Blind Boys sing one of the songs. There are no microphones or instruments, it's all a cappella for now. Being the sound engineer whose job it is to know the voices well, I sit right between four of the Blind Boys of Alabama on stage, while they, along with Jevetta, sing one of the marvelous songs. (Well, okay, I already know their voices well - the real reason I sit there right between them is - BECAUSE I CAN!) 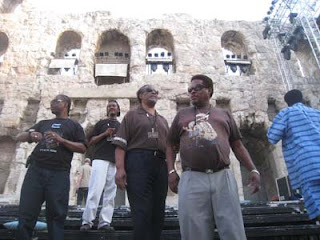 They start to sing, and even at less than full show volume and energy, their perfectly blended beautiful voices shake my insides like thunder and I get goosebumps as big as Mt Olympos, because I am SITTING BETWEEN THE SINGING BLIND BOYS OF ALABAMA ON STAGE UNDERNEATH THE ACROPOLIS. It is, simply, stunning, one of those moments that will stay with me forever. Such powerful, moving, intense music should not be possible with voices alone, but it is. 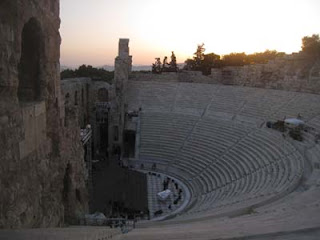 Posted by The Equestrian Vagabond at 7:04 AM