All Roads Lead to Athens 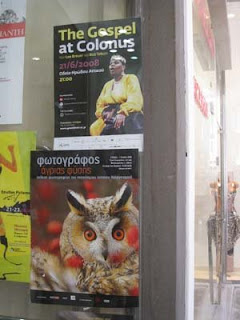 Switching from horses to theatre this week...

The Gospel at Colonus is coming home: to Athens, to the Herodus Atticus Theatre, an outdoor amphitheatre, underneath the Acropolis. 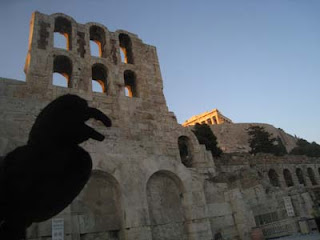 This play is a black gospel musical version of Sophocles' tragedy, Oedipus at Colonus, that premiered 2408 years ago in the Theatre of Dionysos - the ruins of which are 100 yards away. Sophocles was in the chorus. He walked, right where we are walking, and did this play, as we will do.

Once every two or three years, the Gospel calls, and we all - about 35 of us regulars - drop everything that we are doing, and we come - to Russia or Brazil or Vienna or Michigan or Harlem or Salt Lake City or Athens. And we have come from all over the US: this time about 55 of us in total (including the choir), from New York, California, Minnesota, Georgia, Delaware, Chicago, and Idaho (that's me).

And it's the 25th anniversary of our show. And it will be a full moon while we are here. And it's the summer solstice. All signs point to us being right where we should be.

It's not just the way the story is presented that is good, and unique - as preached in a black church - and it's not just the music that is astonishingly good; it's the Colonus family that is the essence of this event. I've been a privileged part of this family for twelve years, joining them in Seattle in 1995 as the sound engineer. The talent in the show is extraordinary: different gospel choirs have performed in it (the Abyssinian choir from Harlem being the featured choir the last few years); there's the Steele family from Minneapolis; the Soul Stirrers from Chicago; and members of the Blind Boys of Alabama; not to mention other amazingly gifted solo singers, and musicians.

It's going to be crazy - a tight set up and tech and rehearsal schedule - for a one night show. One of the Blind Boys, who has done the show since the beginning, Clarence, is not coming, due to poor health and the rigors of travel and rehearsal. Taking his part is the other main Blind Boy, Jimmy. Filling other actors' and singers' and musicians' parts is nothing for this cast - everybody pretty much knows everybody's lines and instruments. Heck, even I can quote the entire show. Saying and singing Clarence's lines will be the easy part; but literally stepping into Clarence's shoes will be difficult, because Jimmy is (as Clarence is), blind. He's never seen where Oedipus stands or walks during the show. He'll have to learn that in a very short time. Not to mention we have stairs on half of this stage. Moreover, a completely new singer is joining the show. Ben Moore has been with the Blind Boys for 2 years, but he's never done the Gospel. He steps into Jimmy's shoes... and since he's blind also, this will be another gigantic literal leap.

And, this is the biggest stage we have EVER been on. It's at least double in size. There are not just 2 entrances to the stage to work with, but 5 (or 13, if you count the entrances from the house, and I bet you the director will use them). Which means all the blocking (positioning) on stage must be re-created, (and reproduced consistently by all, including the Blind Boys); all the light cues rewritten; and every new space presents new problems with wireless microphone systems, and there are at least 30 wireless mics on this show. 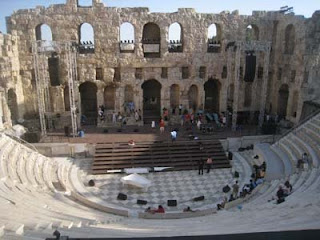 And there's just no time to get everything set up - there is never enough time, but somehow, it all comes together in the end. But this one show is particularly important - every time we get together and do the show, we think it really might be our last. And if this is our last one, and since it is coming home where it belongs, it's so important that it is perfect. We feel we must honor not only the Greeks with their own play, but the Gods that let us come here.

How will we get it all done in time for the Saturday night performance?

At our tech meeting, there are many furrowed brows, much frowning and rubbing of foreheads. We just don't have the time we need. Lights needs... Sound needs... Stage managers need... The director needs... I need to see a runthrough, to see who is singing and saying what parts. It always changes a little bit every show anyway, and now I'll have new microphones to bring up in different places, and new voices to try to balance. 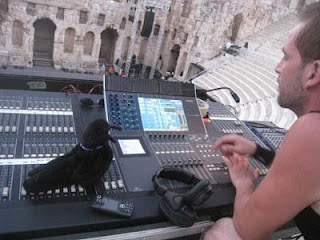 And the whole thing is an acute tease. All this work for ONE SHOW. One exquisite, perhaps last performance, perhaps the last time this family ever gets together; and here, in this monumental, sacred place. It is like taking one bite of Ben and Jerry's Coffee Toffee Crunch ice cream, and putting the pint back. It is like taking one small sip of the perfect cappuchino, and giving the rest of the cup back.

But still it is a gift from the Gods, this small gift we offer back, and we all feel privileged to be here. 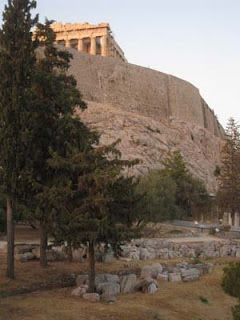 Posted by The Equestrian Vagabond at 1:12 AM